The LG G5: An Early Breakdown Of Specifications, Design, Features And More

With LG having launched the LG G5 today, we get to see the first contender for the mobile flagship race in 2016. The launch of the LG G5 takes place just hours before Korean manufacturing giant Samsung will unveil its flagship pair for 2016, the Samsung Galaxy S7 and the Galaxy S7 Edge.

For all of you who haven't upgraded your smartphone for quite a while and would see how the LG G5 stacks up against its existing and future competitors, we've done a preliminary specification breakdown that takes a look at design, performance, multimedia and more.

Design wise we see that today's launch confirms nearly every major feature change the rumor mill had predicted. The device comes with the much talked about accessory slot, a rather different approach by the Korean manufacturer to add functionality to its smartphone.

The 'Modular Design' of the LG G5 includes a detachable bottom slot, which can be seen in the images above. Its a rather interesting approach towards smartphone add ons by the company. The detachable module is simplistically crafted and manages to fit the accessories inside the 8mm thickness of the device. 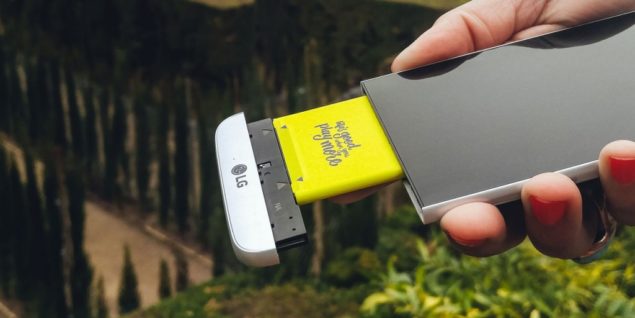 This does however lead to a much smaller batter inside the device, with users who require more power on their devices required to purchase additional power packs. Looks like Qualcomm and LG really have there hopes high for the Snapdragon 820's power management features.

Otherwise the LG G5 comes with a rather fluid approach to design, with the affect of corners on the device's overall form factor being significantly reduced. The rear of the device sees the dual camera which was promised to us by the rumor mill and a fingerprint sensor which tries to stand out yet blend in at the same time.

The front of the LG G5 sees the overall screen dominate its frame and we'd imagine to see no metal at the front were it not for the accessory slot. The reduced focus on the device's corners also blends the bottom with the overall frame, becoming the final piece in a sturdily designed device.

On board the LG G5 comes the Snapdragon 820, which itself is surrounding by a lot of expectations and hype. As mentioned above, looks like LG has high hopes for the Snapdragon 820, as the G5 comes with a much smaller battery than you'd come to expect in a 2016 Android flagship.

The Snapdragon 820 comes with four Kryo cores on board, with one set clocking at 1.6GHz and the other at 2.1GHz. Its manufactured on Samsung's 14nm LPP, and is expected to make up for its predecessor's rather dismal performance. While the true grit of the Snapdragon 820 will only be known once all devices become available for testing, for now, we'd say to remain optimistic. 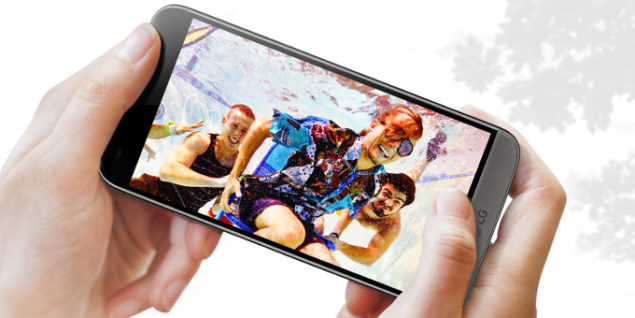 The Snapdragon 820 on the LG G5 is supplemented by 4GB of RAM and 32GB of internal storage. Taking a look at the RAM count for the device, looks like the company really wants its device to stand out when compared to the rest of the pack.

The 4GB of RAM would however be utilized mostly by the display of the device. The LG G5 boasts a display resolution of 1440x2560 which while is impressive for an average pixel hungry user, should prove to be rather cumbersome in the long run for battery performance; an issue that's plagued previous devices in LG's G lineup as well.

Now, coming towards the third primary aspect of a smartphone's performance: the multimedia. As the industry and the market evolves, we see that users have started to become increasingly dependent on their gadgets for a variety of tasks. These range from everyday photography and web browsing, to managing personal data.

The rear camera is where things get interesting on the LG G5. Just as the rumor mill had predicted, the device comes with a dual camera set up on board. The LG G4 has a well designed camera that managed to take care of balance and definition quite well at the same time, and by taking a look at the LG G5, we should expect some nice things as well.

Taking a look at some early camera samples of the LG G5, we see that overall composure of images in low light scenarios does appear to do quite well. While you're going to have to wait for a detailed camera breakdown, for now, rear camera specifications for the device stand at a dual camera setup with one 16MP OIS lens and another 8MP wide lens.

These combined will allow not only for improved quality, but if software capabilities are equally sound, then will end up transforming the LG G5's photographic capabilities ahead of a traditional smartphone's context. This was something which the company also tried with the LG G4, and today's launch definitely sees things taken to another level.

Other features for the LG G5 include greatly enhanced functionality in the form of accessories supported by the detachable module. Not only will you be able to use the device's dual cameras with a lot of ease but other features such as audio, 360 shooting and a very impressive sounding LG 360 VR. Safe to say, LG's created an entirely new box for itself to play with in the LG G5, and the device should see some interesting new features pop up soon.

The LG G5 should be expected to cost in the ballpark of $500 - 600, though official pricing information isn't available for now from LG's end. The company promises to announce pricing details sometime next month, with the device to become available starting April. So there's plenty of time for you to scout the market for other devices as well.

That wraps up our preliminary analysis of the LG G5. Like every other smartphone out there, the device comes with its own set of weaknesses and strengths, but one thing's for sure. LG's put quite an effort into designing the G5 and that effort is visible in the final product.

Not only should the accessory slot win over a lot of users, power and casual alike, but the dual camera approach should serve the needs of photography enthusiasts as well. The device also comes with an all metal body, giving it that much needed premium look and feel combined with an always on display; a nice touch to the overall boosted capabilities of the smartphone.

How well does the LG G5 fare up against the rest of the pack? We'll find out soon enough as not only Samsung's Galaxy S7 and Galaxy S7 Edge flagship launches will be with us soon enough, but other manufacturers such as Xiaomi and HTC are also expected to unveil new devices. Till then, stay tuned and let us know what you think in the comments section below.