The Legendary American Astronaut and Senator, John Glenn Passed Away At The Age of 95 In Ohio 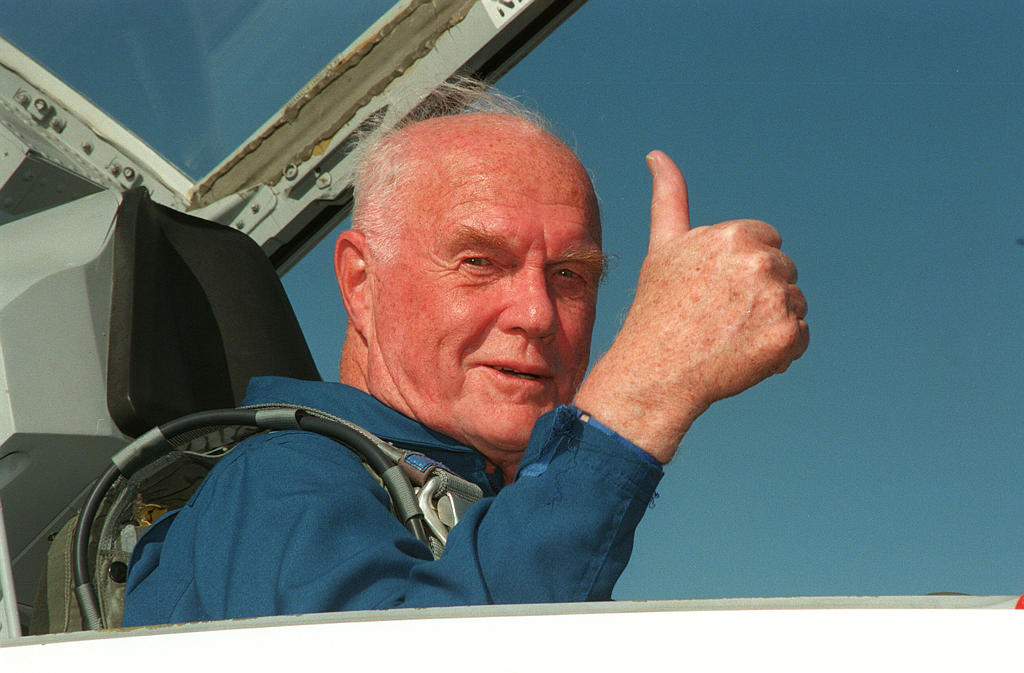 John Glenn, the legendary war veteran, astronaut and a United States Senator passed away this afternoon at the age of 95. He was hospitalized in his home state of Ohio at the time of death. A spokesman for the John Glenn College of Public Affairs said in a statement that Glenn had been in the hospital for more than a week now. He had suffered a stroke two years ago after having a heart valve replacement surgery. However, it is not clear as to why he was taken to the James Cancer Hospital in Ohio.

A little about John Glenn

The world is deeply moved by this loss and it may never see such a man again. John Herschel Glenn Jr. was an American aviator, engineer, astronaut and a Senator. He served as a combat pilot in WW2 and the Korean War. He was among the ‘Mercury Seven’ group of test pilots that were selected in 1959 by NASA to become America’s first astronauts and fly the Project Mercury spacecraft. Glenn became the fifth person in space when he flew the ‘Friendship 7’ mission on February 20th, 1962.

He is the earliest born American to go into the orbit and also the second earliest born man overall after the Soviet cosmonaut Georgy Beregovoy. Glenn received multiple awards and honors over the course of his very exciting life. He received the Congressional Space Medal of Honor in 1978 and also was entered into the US Astronaut Hall of fame in 1990. He was the last surviving member of the Mercury Seven group after the death of Scott Carpenter in October 2013.

Glenn was a very active being and moved from one ambition to another. After a successful career as an astronaut he resigned from NASA on the 16th of January, 1964. The very next day he announced his plans to run for a Senate seat from his home state of Ohio. Due to an injury, however he withdrew from the race and wasn’t successful in this aim till 1974, when he won the elections as a member of the Democratic Party. He served in this position for nearly 25 years. On the 29th of October 1998, while still in the position of Senator, Glenn became the oldest person to fly into space. He became the only person to have flown both in the mercury and the Space Shuttle programs. He also flew as a Payload Specialist on the Discovery mission, STS-95. He received the Presidential Medal of Freedom in 2012.

Michael Drake, president of Ohio State University, said in a statement, "The Ohio State University community deeply mourns the loss of John Glenn, Ohio's consummate public servant and a true American hero. He leaves an undiminished legacy as one of the great people of our time." NASA also tweeted over this sad affair and said that it is “saddened by the loss of Sen. John Glenn.”

Drake talked about this hero and described him as a "decorated U.S. Marine aviator, legendary NASA astronaut, tireless public servant, and an unparalleled supporter of The John Glenn College of Public Affairs at Ohio State, where he served actively as an adjunct professor until just recently."

People are putting up tweets all over the world and many claim that the entire team of Mercury seven is gone and the world will not see the likes of them ever again.

The Mercury Seven are all gone. We will not their like again.

The Mercury 7 are all gone. pic.twitter.com/3R7oCp2oJq