David Jaffe is known throughout the gaming community for being a bit outspoken at times. He’s certainly caught a lot of criticism for comments he’s made in the past regarding other games he’s opened his mouth about. In fact, just perusing his Twitter account can reveal that he is indeed quite opinionated. This time about Destiny. 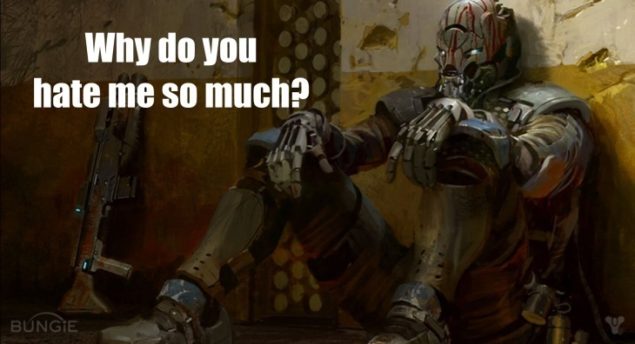 David Jaffe has recently expressed his displeasure over the frequent ‘why are people leaving Destiny articles.

On David Jaffe’s twitter account, he’s posted comments that effectively dismiss anyone who has played Destiny for more than 100 hours and has become bored or feel as if a massively multiplayer game should continue to provide entertainment past a certain amount of hours of content.

He makes the logical assumption that if one were to play a game for more than 100 hours that it must be good. That isn’t always true. An addictive game isn’t always necessarily a good game. As with all addictions, a game may have a built in reward system that draws us to it due to instant gratification or something else entirely. We want to pick up the loot, we want more of whatever is offered by beating the newest update. That doesn’t necessarily mean its good by any means. It could even trigger an underlying addictive personality trait that’s not related to the game itself.

Most MMO's seem to have continuous content that draw the fan base back to it. This content is designed to continually make money as well as generate interest in the game itself for old and new players alike. EVE Online seems to be able to remain interesting for more than 100 hours of gameplay. World of Warcraft seems to do the same as well. So it's not a stretch to ask Destiny to do the same. But it doesn't seem to.

I digress, I feel as if his thinking is flawed. Though I do agree that the prevalence of articles regarding leaving Destiny is a bit much. Does it truly matter why anyone leaves a game? To be honest, who cares? Play a game if you enjoy it and don’t play it if you don’t enjoy it. It’s a rather simple formula. But do we need articles telling us why you left Destiny?

For those that are unfamiliar, David Jaffe was the creative director for the God of War and Twisted Metal series of video games. He’s also the founder of two game studios, Eat Sleep Play which he left in 2012 to found another, The Bartlet Jones Supernatural Detective Agency, which has just recently begun development on their first title, Drawn to Death, a PlayStation 4 exclusive title.