We're hearing that a new 10.8-inch iPad Air 4 is in the works which will come with a new design. The leaked schematics share how the upcoming iPad will be different. On the first look, we can see that the schematics of the iPad Air 4 shows a design that resembles the iPad Pro with slim bezels and Face ID. However, there are a few things that make us skeptical.

As mentioned earlier, the iPad Air 4's schematics show thinner bezels around the edges. Apart from this, we will get USB-C connectivity, an Apple Pencil connector on the side, and a Smart Connector at the back for accessories. Lastly, one of the most important additions that gave room to slimmer bezels, the schematics show Face ID support.

Shared by 91Mobile, the leaked schematics show the low-end eighth-gen iPad which would follow up to the current 10.2-inch iPad that costs $329. If we're sticking to Ming-Chi Kuo's words, Apple will release a 10.8-inch iPad in 2020, so we have the credibility to the news. 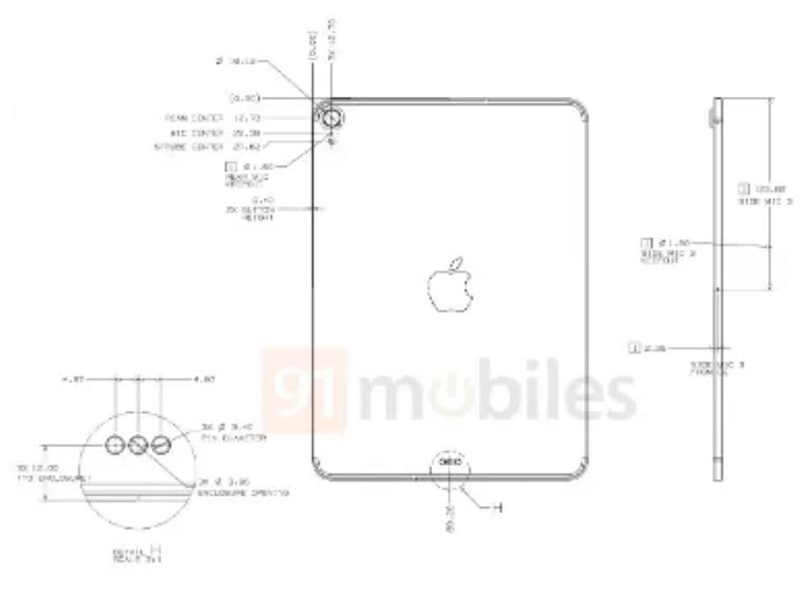 This is not the first time that we're hearing this as an instruction manual was leaked last week that showcased the forthcoming iPad Air 4 with a nearly full-screen display, USB-C connectivity, a single-lens camera setup at the back with a flash. However, it also mentioned that the model would feature Touch ID authentication technology inside the power button instead of Face ID.

At this point, it poses an interesting situation because the schematics reveal that the $329 iPad will boast Face ID. Take note that Apple integrating Touch ID in the Power button is very unlikely. Also, it was previously rumored that the iPad Air might potentially add support for the Magic Keyboard.

App has filed several new iPad models with the Eurasian regulatory database recently, which is a clear hint that the Cupertino giant is gearing up to offer more options to users. However, we are not familiar with the official design or the release frame of the models. We will share more details on the matter as soon as we have news pertaining to the topic.