Latest Windows 10 May 2019 Update Blocked on Some Intel Machines 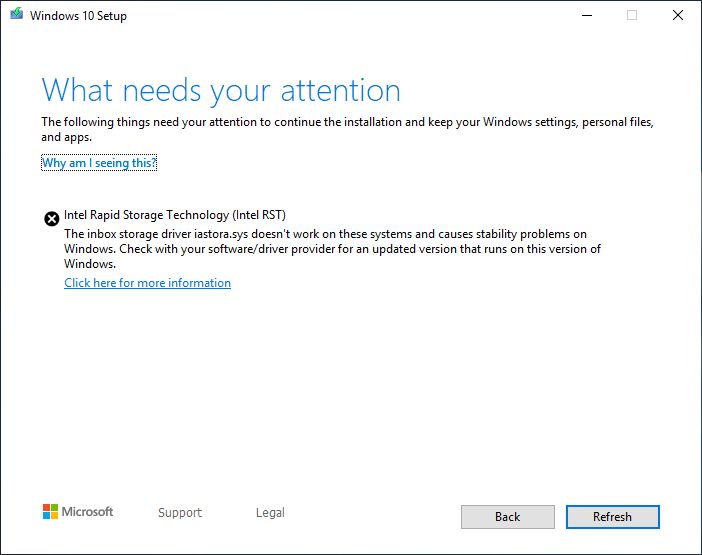 Microsoft has been addressing the bugs and removing compatibility holds from the latest Windows 10 May 2019 Update. However, a new bug has been reported pushing the Windows maker to block version 1903 on devices with some versions of the Intel Rapid Storage Technology (RST) drivers.

The latest version could cause stability issues for the affected devices. The problem is limited to devices with Intel Rapid Storage Driver with versions between 15.1.0.1002 and 15.5.2.1053. If you have the affected version and you are trying to install Windows 10 version 1903, you will get the following error message:

The inbox storage driver iastora.sys doesn’t work on these systems and causes stability problems on Windows. Check with your software/driver provider for an updated version that runs on this version of Windows.

Microsoft writes that "versions 15.5.2.1054 or later are compatible, and a device that has these drivers installed can install the Windows 10 May 2019 Update." Affected users are recommended to install version 15.9.6.1044. The Windows maker added:

To resolve this issue, you will need to update the Intel® RST drivers for your device to version 15.5.2.1054 or a later. Check with your device manufacturer (OEM) to see if an updated driver is available and install it. You can also download the latest Intel® RST drivers directly from Intel at Intel® Rapid Storage Technology (Intel® RST) User Interface and Driver. Once your drivers are updated, you can restart the installation process for the May 2019 Update.

You can download the latest version from Intel to be able to install Windows 10 1903.