THQ Nordic are continuing their acquisitions and expanding even further than would have been expected from what used to be Nordic Games. This time, the company has acquired the 'Kingdoms of Amalur' IP. In addition, they have also acquired the 'Amalur' IP, which is based on the previously abandoned MMORPG project called 'Copernicus'.

This marks yet another move by the company to further expand their portfolio and brand. What started in 2013, during the firesale of then-bankrupt THQ, Nordic games acquired the THQ name and license. The company later rebranded to THQ Nordic in 2016. That same year the company also acquired NovaLogic, the NovaLogic trademark and all of their IP's (Delta Force, Armored Fist, Comanche, etc).

It proved to be a slow start to what has now been a very busy twelve months from the company. Last November they acquired developers Experiment 101 and the Biomutant IP.  Earlier this year, in February, their biggest acquisition to date came with the purchase of Koch Media, including the Deep Silver division and IP's like Saints Row, Dead Island and the license for Metro. Last month, the company acquired the Timesplitters and Second Sight rights via their Koch Media subsidiary. Now they have the rights to Kingdoms of Amalur, yet another IP they could do great things with.

Here's the press release in full:

THQ Nordic today announced that the acquisition of the intellectual property “Kingdoms of Amalur” has been finalized with 38 Studios LLC, based in Providence, RI, US. The deal also covered the acquisition of “Amalur” - based on the abandoned MMORPG project “Copernicus”.

The acquisition itself is being handled by THQ Nordic AB, based in Karlstad, Sweden, and daily operations (sales and distribution, evaluation of sequels & new content etc.) will be done via THQ Nordic GmbH in Vienna, Austria. 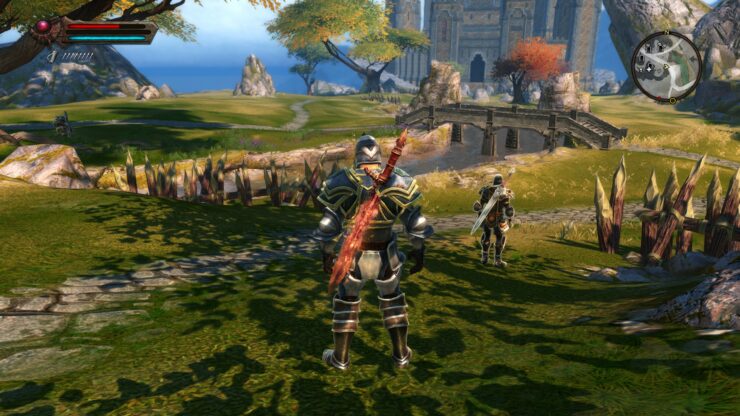 Kingdoms of Amalur - A Reckoning With Great Potential

Kingdoms of Amalur is a game where a sequel, not simply a remaster, could do great things. The title itself was a financial failure, if only for the significant amount of money that was pumped into the game and its MMORPG heritage. The studio, led by former Baseball player Curt Schilling, began with the idea of creating an MMORPG based on a millennia-long history of a world penned by author R.A. Salvatore.

This was eventually repurposed into what we know as Kingdoms of Amalur: Reckoning. THQ (original ones), who were struggling for money at this time owned developers Big Huge Games who were working on an RPG of their own. 38 Studios bought Big Huge Games and repurposed what they could of that RPG, brought in the world penned by R.A. Salvatore and the outcome was Kingdoms of Amalur: Reckoning.

It came to an end with the bankruptcy of 38 Studios. This isn't to say that the game itself didn't sell well. Curt Schilling himself bragged that the game sold 1.2 million copies in its first 90 days on sale. It certainly has its fanbase and quickly gained a following. There were rumours regarding a sequel being in pre-production, likely being the MMO that the studio was originally set up to create.

The issues began when they defaulted on a payment of a $75 million loan they received from Rhode Island. This was later paid, but then all of the staff within the company went unpaid for the month. Eventually, the company went bankrupt and all assets were taken over by the state of Rhode Island. The story didn't end there, with Curt Schilling being taken to court and agreeing to a $2.5 million settlement he would have to pay. This was agreed in 2016, four years after the original bankruptcy. It was part of a string of lawsuits brought by Rhode Island, which finally concluded just last year.

All I can say is that the growth of THQ Nordic is certainly a positive thing. They are working on a surprising number of great looking titles, including Biomutant, Desperados III (which I saw at Gamescom) and Darksiders 3 to name a few. They also haven't pushed loot boxes or other shady schemes within their games, which is always a positive for me. It helps that Kingdoms of Amalur is a game that really deserved better. This gives it a chance that the game long deserved.