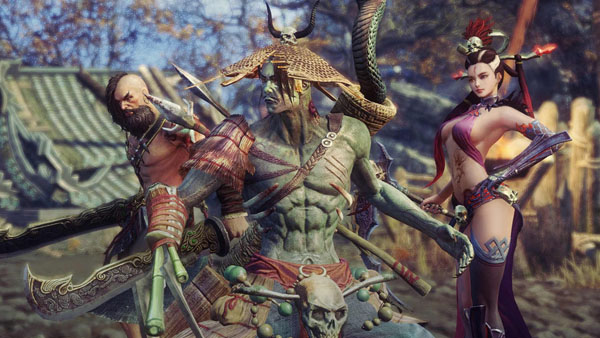 If you're an MMO fan, there's a chance you might have played Age of Wushu (Wulin in Europe), the Free-to-Play MMORPG created by Snail Games. Based on the Wuxia-inspired lore of adventures and martial arts in medieval China, the game was fairly successful to the extent that it spawned a mobile spin-off titled Age of Wushu Dynasty.

However, the next big title in Snail Games' pocket is King of Wushu. The genre is quite different, since this is an action oriented MOBA where two teams of players (5v5) fight each other after choosing their heroes from a roster of 36 Kung Fu warriors.

The graphics are also much better, thanks to the use of Crytek's CRYENGINE. King of Wushu was also one of the first DirectX 12 tech demonstrations when it was showcased at last year's Build, after two engineers spent six weeks porting it to the new API. We talked about this and much more, such as the imminent North American/European beta tests and their attempt to add true cross-play functionality, with Snail Games' Assistant Project Manager Chao Cai.

What do you think about the growing competition in the action MOBA genre? How will your game stand out?
Growing competition also means growing popularity, and I’m happy to see that. Compared to other MOBAs in the market, King of Wushu is unique in its approach to the genre by incorporating aesthetics from Chinese Wuxia fantasies. Additionally, the game features several beautifully-detailed battlefields based on kung fu legends, animations based on motion captures of real martial artists, flying skills like those featured in popular kung fu movies, and so on. This unique approach to gameplay and aesthetics is what really helps King of Wushu stand out compared to the competition.

Are you going to add more gameplay modes and maps in the next months? If so, will they be paid or free DLC?
So far, there are four maps in King of Wushu, along with some interesting metagame features such as persistent character levels and upgradeable stats. We intend to expand our map roster in the future and continue to improve upon on the base game. New maps and gameplay modes will all be available for free.

Do you intend to conduct beta events for King of Wushu in North America/Europe? If so, can we expect them this year?
Actually, we are busy preparing a beta version for North America and Europe right now; barring any major technical issues, I believe it should be launched around the middle of the year.

You prepared one of the first DX12 tech demonstrations. What was your experience with DirectX 12 on PC? Do you plan to add more DX12 features to further improve performance?
Applying DX12 to King of Wushu really helped show us the incredible capabilities of DX12; we would definitely like to explore additional DX12 features and functionality.

Do you intend to upgrade the game to the latest engine version (CRYENGINE V)?
We are very positive that CRYENGINE V will lead to great improvements when used alongside DX12, VR, as well as the game itself, so we are experimenting with the newest version to see exactly how we can use it to improve gameplay.

Have you considered adding support for Vulkan, the low-level API by Khronos Group, in King of Wushu?
We hadn’t planned on it.

According to this article, you have been planning to add cross-platform support in King of Wushu for quite a while. Now that Microsoft officially opened the gates of Xbox Live, can we expect PC/PS4/XB1 players to be able to enter the same match?
We have been trying to make this game cross-platform for a while but there are still some kinks we need to work out; hopefully we can integrate true cross-platform play in the near future.

In this interview you mentioned the intention of making King of Wushu compatible with the Oculus Rift and PlayStation VR devices. Do you have an ETA for this and what about compatibility for the HTC Vive? Also, will there be any differences between the various VR versions?
We don’t have a solid plan for VR integration just yet.

From your perspective, would the rumored upgraded PlayStation 4/Xbox One consoles be helpful or not for the market?
The improvement of hardware will always help fulfill game’s development ideals, enrich the players’ gaming experience, as well as improve some special effects in the game. What’s more, enhanced hardware will enable us as developers to apply more new technologies in games. Based on what we’ve heard about these new consoles so far, the community wouldn’t be split by the release of these new consoles since games will be required to run on first generation consoles as well. At least from where we’re standing, I can’t see any downsides for the market.