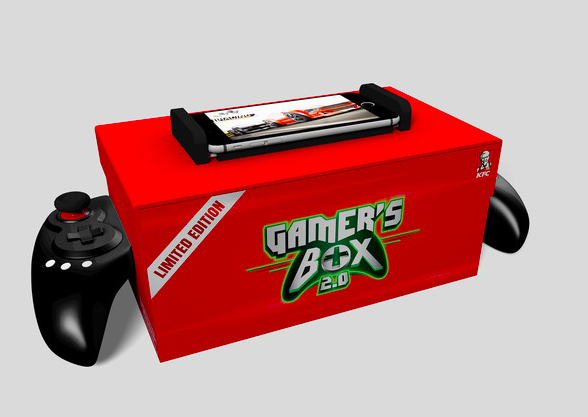 KFC seems to be on a roll these days with new (bizarre) products that are not related to fried chicken that the franchise is popular for. This month, we reported about a new phone that KFC launched in China in collaboration with Huawei to commemorate its anniversary in the region. Now, in the latest move, the fast food restaurant chain has launched a Gamer's Box 2.0. in India.

The India-exclusive Gamer's Box 2.0 comes with a built-in Bluetooth gamepad clubbed with a phone holder on top that lets customers play games while they enjoy meals at the outlet. Not just a gamepad, the box also has a soda holder as KFC has collaborated with Mountain Dew for the product.

Brace Yourselves! KFC Has Launched a ‘Flagship Killer’ With Colonel Sanders Logo On the Rear

As intriguing as it looks, we wonder why any customer in India would like to play games while eating his/her meal? We also wonder why KFC came up with such a product anyway. The game controller requires the gamer to play with both their hands, so how would that be possible when they are at KFC for the primary reason of using their hands for eating? Smartphone gaming has a lot to do with mobility and it would be highly inconvenient to carry a controller everywhere. Regardless, the company has launched the product, and it is available at local KFCs in India.

On second thoughts, the box could appeal to the kids and gamers, so perhaps it could also be a collectable piece. However, we still can't see any point a fast food chain has in introducing it.

Our readers from India can get this Gamer’s Box 2.0 at their nearest KFC outlet. For the readers outside India, you can still get it by participating in KFC India’s contest on Facebook, Twitter, or Instagram but there are just 10 units reserved for the contest. Or, maybe you can buy an actual Bluetooth game controller that does not ooze KFC branding.

Back in 2014, the company introduced an oversized iPhone case in Japan followed by a tray-keyboard, and bucket-printer hybrid. Last year, we witnessed the launch of Watt a Box – a box of chicken that doubles as a power bank.