The quarterly JPR research report is out and as expected the GPU market took a hit. With the crypto-mining boom pretty much over, AIB shipments of dedicated graphics cards took a hit with the AIB market down 27.96% compared to the year-ago quarter. At the same time Intel gained market share from both AMD and NVIDIA as its integrated graphics in next-generation CPUs shipped to great success.

JPR is one of the more reliable research reports out there but keep in mind that it counts Intel iGPUs as part of the market share, if you look at only AMD and NVIDIA, the former lost 2 percentage points of market share while the latter lost only 1. This means AMD was affected twice as much by the air going out of the crypto bubble - and this makes sense, Vega was an absolute killer in mining. At the same time, we have seen stagnation in the GPU market due to lack of demand, no competition and no new products. 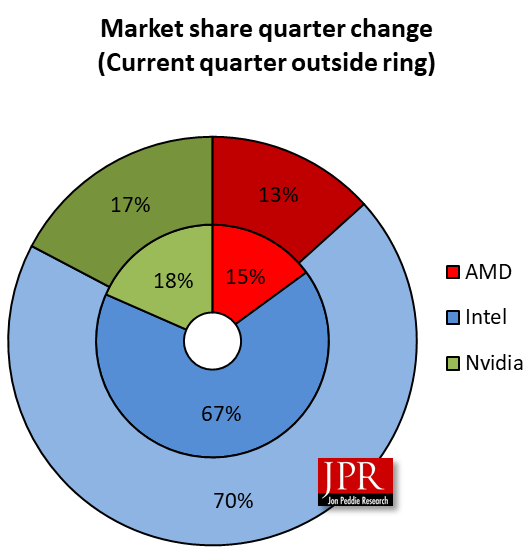 This is all set to change in Q3 2018 with NVIDIA shipping its brand new lineup of Turing which should allow it to clawback market share from both AMD and Intel. Since AMD has no high-end GPU planned to go out anytime soon, it shouldn't be able to put too much of a fight to prevent loss of MS. Interestingly, however, the PC market increased almost 2% year over year. Here is an extract from the report for those of you interested in reading further:

Year-to-year total GPU shipments decreased -4.9%, desktop graphics decreased -6%, notebooks decreased -5%. The PC market is showing more stabilization, and now seems to have shaken off the gold rush fever of crypto-mining, overall volume slipped, albeit with bright spots for the market here and there. We can mark Q1’18 as the peak and last hurrah of the crypto-mining fever. Desktop GPUs, which went into mining rigs, have dropped back to their normal volume.

We believe the market for AIBs for crypto-mining has ended and this will likely be our last mention of it. Tablets too have seen a slowdown from their peak in 2014, and the forecast is that this once PC cannibal has saturated its market and will decline to a replacement status. It will also be in turn cannibalized by the smart new always-connected detachable PC tablets. The second quarter is typically down from the previous quarter in the seasonal cycles of the past. For Q2'18 it decreased -1.5% from last quarter and was below the ten-year average of -2.99%. Source: JPR