Your “Journey” of a Thousand Steps Begins On March 13th

Journey is a lost gem in the world of PlayStation Exclusives, while it may not have the hype of Final Fantasy Versus XIII or the Last Guardian it is still a superb game. Made from the creators of Flower (which I might add despite the genre is an AMAZING game) and flOw, The makers of the game "ThatGameCompany" finished the game not more than a few months ago and were waiting for Sony to put the game on their store. It seems that Sony has announced a release date for this spectacular game for the NA and EU region PSN stores for the price of $14.99. 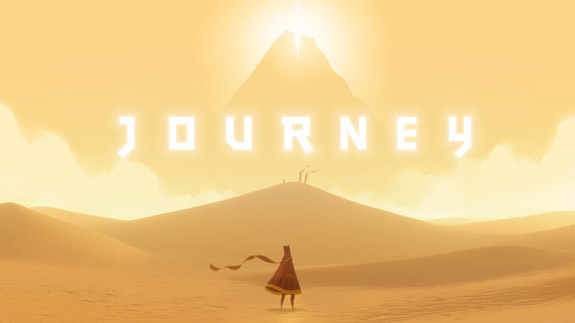 Journey has been in long development from ThatGameCompany who bought you beautiful games like flOw and Flower, while the studio has not released a game since 2009 this is the latest fruits of their labors for us to enjoy. Journey isn't looking to be the next big thing in adventure games nor is it competing with any similar genre or any other game company, the game is simply made for the enjoyment of the players to show us that in a unique way video games can be considered art in motion as we were shown endlessly in Flower and flOw for the PlayStation 3.

Journey will be the first (sort of) multiplayer experiment of the studio, the MP will be unique in the sense that players can run into each other but you can't communicate with each other or see the other persons name or PSN ID, in other words you will be complete strangers to each other and it will be your moral choice to aid or not to aid another player in need but I am sure that there will definitely trophies to help make the choices easier for the players but for those people who don't go for trophies can choose their own play style.

Journey is a simple story; You are a traveler in a desert looking to reach a far away mountain and along your way you will encounter a different amount of terrain types and challenges that you will have to overcome in order to proceed but it isn't going to be something that will make you look on the internet for a walkthrough or a guide as the game is meant to be enjoyed for its beauty and simplicity.

In a modern day where video games are constantly getting negative attention due to the level of Violence present in them there are studios like ThatGameCompany which show that not all games are about blood, alcohol and toilet humor and being able to show video games in this sort of a light is a real challenge and the developers have done a superb job and I can easily say that this is their best work YET.

The game will launch on the North American Store on March 13th for the super low price of $14.99 and a day later on the EU PlayStation store while the EU price is still unknown I would assume that it will still be able to meet the $14.99 price tag in British Pounds / Euro.