So after the release of Batman: Arkham Asylum and Arkham City, Arkham could now be going global? In a mysterious trailer shown at this years VGA awards shows a spotlight where the Joker is talking to the audience and dropping a script with the title "BATMAN: ARKHAM WORLD SCRIPT" and if you look closely the back of the script has the rocksteady logo on it which means that Rocksteady still in the loop for the next Batman game and also Joker is going to be back again in the next game. 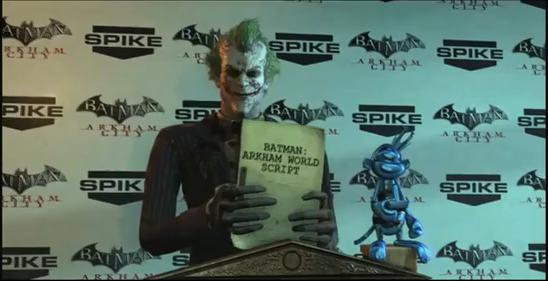 Okay so the trailer has a lot of questions, for starters why is Batman on the floor? and secondly what the heck is Arkham World? If Arkham Asylum took place in the institute, and Arkham City took place inside Gotham City then does this mean that Arkham is now going global or regional and Batman will fly from one hot spot of the world to the other fighting villains on a global scale? The developers hid a hint of Arkham City in Arkham Asylum and now this trailer shows us that the next Arkham game is definitely plausible but the plot seems a little ... odd?

Skip to 0:54 to see the trailer and for a better quality version on YouTube go HERE

Whatever the plot or the game might hold will have to wait for the future but its good to know that Batman: Arkham series will continue to grow with time and will continue to get better considering what a significant change Arkham City was from Arkham Asylum, I hope the same change can be brought into Arkham World and make it even more spectacular than Arkham City.