YouTuber EJ Hardware, a Chinese tech enthusiast, recently ran benchmarks on two Hygon C86 3185 CPUs, which are not available outside of Chinese markets, versus the AMD Ryzen 5 5600X to see the performance of the two different companies. Hygon, a company who partially owned by AMD since 2016 through separate business ventures. This alliance with AMD allowed Hygon to access and obtain both the x86 and SoC IP licenses from AMD to create and manufacture chips sold in their perspective markets, mainly in the Eastern territory.

Hygon's C86 technology is a combination of 14nm server and mainstream processors. This process allows for chips to have anywhere between four to 32 Zen-based cores. Because of the combination of Hygon and AMD's technological advances, the C86 CPUs are identical to the AMD Ryzen and EPYC processors. It is even said that the chips can be placed into AM4 and SP3 sockets due to their design, even with some soldering to the motherboard involved in the process.

With the launch of the Hygon C86 3185 in 2020, it showcased a total of eight first-generation Zen-based cores utilizing simultaneous multithreading (SMT). The base clock for the Hygon CPU is 2GHz and can be boosted as high as 3.4GHz. Onboard is 4MBs of L2 cache, but also 16MBs of L3 cache. In essence, the chip's design is identical on almost every aspect of the AMD Ryzen 5 5600X. It also has a lot of similarities in design with the AMD Ryzen 7 1700X, which was used in the examples in EJ Hardware's video. Both CPUs share 95W TDP levels, but what is amazing is the Hygon C86 3185 has a 70W power consumption, which is why the Ryzen 7 1700X would essentially be more efficient. 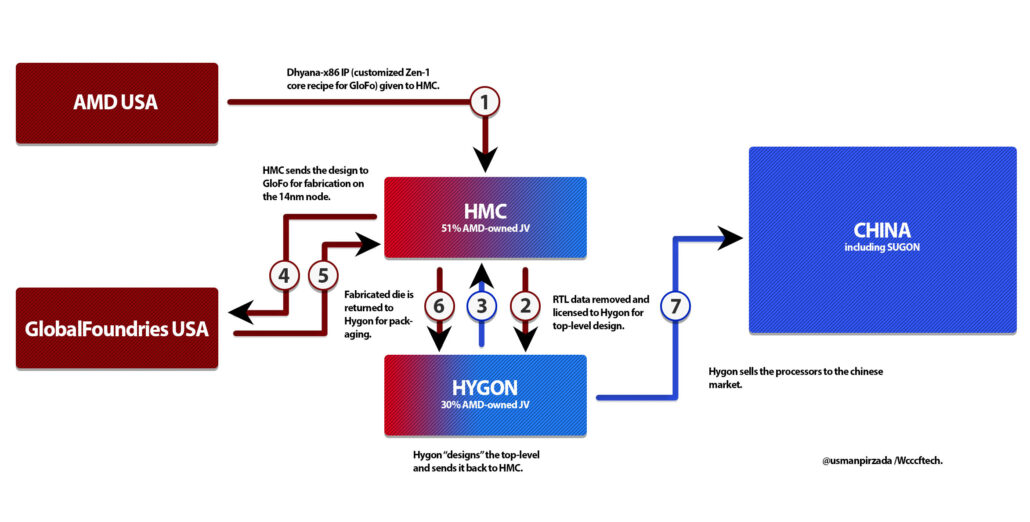 Tom's Hardware speculates that the YouTuber used the Hygon CPUs on a W550-H30 workstation. The workstation offered two separate C86 3185 models, adding up to sixteen first-gen Zen-based cores. While the Ryzen 5 5600X utilizes six first-gen Zen 3 cores, a 7nm microarchitecture, and processes a 3.7GHz base clock and boosts as high as 4.6GHz, it also carries 2x the L3 cache as the Hygon C86 3185 but produces a TDP that is 30W lower than the Hygon chip.

Since EJ Hardware appears to be utilizing a server-style motherboard for her tests, the frequency of memory is only capable of using DDR4-1866. Using that particular memory performs slightly below average in the process. Tom's Hardware also points out that due to the chips having to be soldered to the motherboard used, she was incapable of placing them in a more adequate motherboard, such as the B450 family.

Her results of the benchmark showed that the AMD Ryzen 5 5600X produced 97% and 135% higher performance on the single-core tests than the Hygon chips in both Cinebench R2
and R23 tests. However, when running the Cinebench R20 and R23 multi-core tests, the Hygon CPUs performed much better than the AMD Ryzen 5 5600X by 12% and 13%, respectively. The PCMark 10 test was the least surprising result, showing AMD's Ryzen 5 chip outperforming the two Hygon chips by a wide margin of 59 percent.

With the gaming tests, EJ Hardware's tests showed decent performance, as long as they were used in a two-fold configuration. Combining an NVIDIA GeForce RTX 3080 Ti, the CPUs produced 1080p frame rates utilizing a 4K resolution. The only game that the Hygon chips did not produce well with was Cyberpunk 2077.

Essentially, EJ Hardware proved that the Zen 3-based Ryzen 5 5600X is highly efficient with smaller core and thread counts and a less power-hungry TDP number. It is said that two Ryzen 7 1700X CPUs are the only real way of overpowering and producing better results than one Ryzen 5 5600X while performing in workloads consisting of multi-threading. However, the single-threaded results from her tests do prove that the Zen first-gen outperformed the Zen 3 performance. Regardless of performance, China's focus is more on self-sufficient technology than high-performing processors.