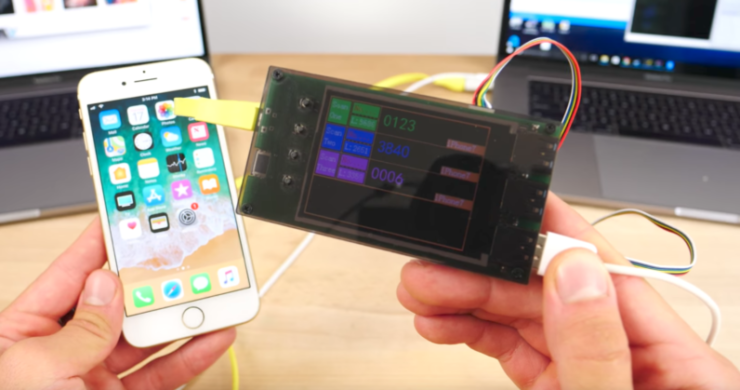 To think that FBI paid nearly a million dollars to get iPhone 5c unlocked...

While Apple fans may like to believe their devices are unhackable, the Cupertino tech giant keeps appearing in (in)security stories from time to time. Yesterday, we saw a researcher sharing the decryption key of Apple's Secure Enclave Processor. While that story was more of a "look into the operating system" than an iPhone hack, this latest story shows a different picture.

EverythingApplePro, a popular YouTuber, has apparently stumbled upon a hacking device that can crack open any iPhone 7 or iPhone 7 Plus handset. Costing only $500, the "iPhone hack box" uses an exploit in the update process to brute force and bypass the lock screen passcode of up to three iPhone 7 and iPhone 7 Plus units at a time. It apparently works only on iOS 10.3.3 and iOS 11 beta and only on the latest iPhone 7 duo.

The miniature device has three USB ports (hence three simultaneous attacks) and reportedly doesn't work on older iOS versions. The YouTuber said if an attacker has to break into an iPhone 7 that doesn't have iOS 10.3.3 or the iOS 11 beta, they can import the iOS 10.3.3 firmware to launch the brute force attack. They don't even need to enter a passcode to install the latest iOS software.

"They found a loophole in the data recovery state that allows you to use as many passcode attempts as you want," the YouTuber explained. The update process is crucial for the iPhone hack to work since it uses a vulnerability in the process.

In the video, the YouTuber demonstrates the process by connecting the iPhone 7 to a MacBook Pro running Windows, placing the phone in DFU mode. An app called 3uTools is used to force the handset to update without a passcode.

Since this is a typical brute force attack, EverythingApplePro did note that it could still take the hacking device a few days to crack open your iPhone - still not a small feat. The Federal Bureau of Investigation had made a huge ruckus last year when it demanded Apple to help it crack open an iPhone 5c, which is way more insecure than the latest generation of iPhones. Even at that time, some security researchers had said that the FBI could unlock the iPhone for under $100. The FBI had reportedly paid over $900,000 to get the 5c unlocked.

It's unclear if this device manufacturer has used some of those instructions for building up this $500 iPhone hack box, or if this exploit that didn't exist in older versions is the only thing that has helped them to hack into iPhone 7 and 7 Plus.

Given Apple's focus on security and looking at how quickly it has previously responded to EverythingApplePro's earlier such videos, we are hopefully going to see a fix coming very soon. Until then, try to be less smug about your iPhone 7?

Earlier: Apple to introduce a "cop button" to help you in sticky situations (it's also emergency-friendly)