This year's iPhones from Apple were different in several aspects from last year's devices. Not only do the iPhone 6s/6s Plus come with an all new build material, but they also contain several upgrades on board, which include upgraded rear and front camera sensors, 3D Touch and RAM upgrades to name a few. The iPhone 6s and the iPhone 6s Plus also come with the Apple A9 on board, a chipset that's said by Apple to outperform its predecessor by 70%.

The A9 is also the first Apple SoC to be manufactured on two different manufacturing processes at the time of device launch. Both Samsung and TSMC have contributed to the A9, and the differences on a hardware level are very apparent. Today we've managed to learn some information about the percentages of TSMC and Samsung's process on the A9, so take a look below to find out more.

After a lot of things were left unanswered from Apple's iPhone launch last month, now another piece in the puzzle is complete. Even though TSMC's and Samsung's 14/16nm FinFET processes might be quite similar, realistically they produce chips with different sizes. While any performance differences should be negligible, or become more clear as time passes, today we learn that Apple's chosen to use both of these chips in very different ways.

App developer Hiraku has created an interesting little piece of software called 'CPU Identifier' which is dedicated on collecting A9 manufacturing statistics on iPhones all around the world. Courtesy of this app, which requires your permission for data usage, looks like Apple's using an interesting method for differentiating between Samsung and TSMC's processor offerings. 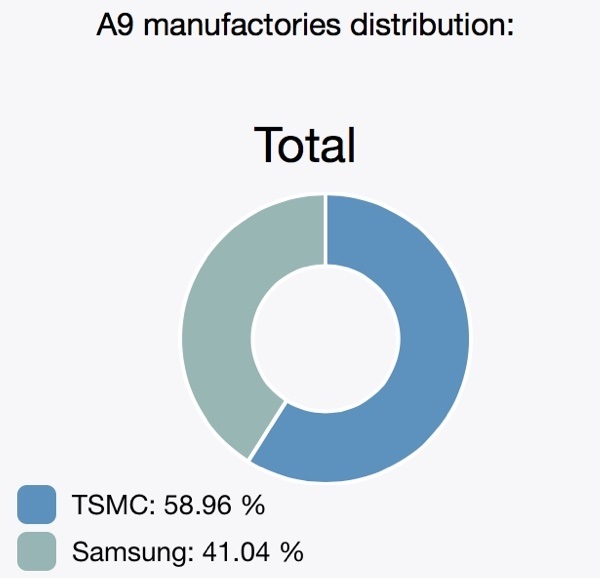 Starting from both the devices, by the looks of things so far, TSMC has the majority of chips used this year. Samsung isn't far behind however, and the percentage of chips inside this year's Apple's flagship comes around to 59% and 41% between TSMC and Samsung respectively. Break these numbers into individual devices however, and Apple's plans start to become quite clear.

There's a clear differentiation between TSMC and Samsung for the A9 on either the iPhone 6s or the iPhone 6s Plus. As you can see in the image below, TSMC gets the lion's share on the iPhone 6s. TSMC's A9 is slightly larger than Samsung's as can be seen in the first image in the post. If size was the only consideration when differentiating between chips, then we'd wager the iPhone 6s to come with the smaller chips.

Things change on the iPhone 6s Plus however, as we see Samsung gain over TSMC this time. While the difference isn't even remotely as stark but Samsung gets more than 10% of A9 share on the iPhone 6s Plus. Reasons behind such numbers are only known by Apple, and we're not very hopeful about the company to further elaborate on the matter.

Hiraku's CPU Identifier is available for all iOS users so if you're wondering whether your iPhone 6s/6s Plus comes with either give it a try. Hiraku also requests that you share your data with him, since it'll help us better understand A9 composition on this year's iPhone launches. So take a look at the link below, install it if you've got an iPhone or an iPhone 6s Plus and let us know about your results in the comments section below.