iPhone 5 VS BlackBerry Z10 Side By Side Video Comparison 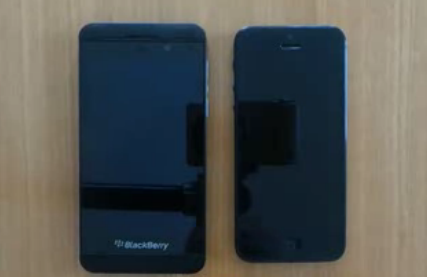 As previously mentioned, this video was initially posted online at Telekom-Presse, a German website. The iPhone 5 vs BlackBerry Z10 video is in German, thankfully though there are English subtitles for the important parts. If you understand German, then this video is definitely going to capture your attention.

Many would consider the iPhone 5 vs BlackBerry Z10 comparison a non issue, seeing how RIM is facing troubled times and has not been able to sustain its market. On the other hand Apple has made records upon sales records with their iPhones, with the iPhone 5 being no exception. However whatever is known and has been revealed about the upcoming BlackBerry happens to be very promising, and don't forget the fact that the new BlackBerry device looks drop dead gorgeous. While it may take it a lot of time to catch up with the success of iPhone 5 or various bestselling Android smartphones, word on the street is that the new and improved BlackBerry simply can not be ignored.

The device shown in this video is said to be the BlackBerry Z10, though the nomenclature and the exact design have not been confirmed by RIM. This particular device has surfaced quite a few times and it has lead many to believe that it is infact the final version or a very close prototype. RIM will officially be announcing BlackBerry 10 on 30th January, merely 9 days from now and only then can we be sure about the specifics.

In this iPhone 5 vs BlackBerry Z10 comparison video, the software that is running on the Z10 is actually a beta version. Despite the fact that it performs at par and even better than iOS on the iPhone 5, there is a possibility that the final version of BlackBerry 10 software will be even more refined as well as better in performance. Check out the video and let us know who you think won the iPhone 5 vs Blackberry Z10 fight, by leaving us a comment below.