Looks like folks over at Apple are hard at work to make mobile streaming and mobile content displays for iOS devices a reality. Just today we received patents that showed how the company plans to make wireless streaming of content on Apple TV possible on iOS devices. Read more on that here. We have more news for you today on that front, with word surfacing about the company's ex-engineers hard at work on making the iPad as a second display for the Macbook. 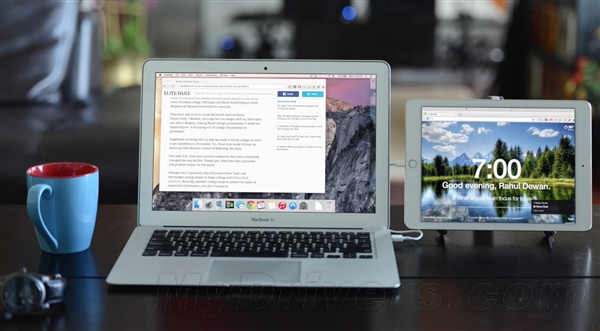 Former Apple Engineers Working On 'Duet Display' To Make The iPad A Second Screen For The MacBook.

While Apple's patents for wireless Apple TV iOS device streaming might be interesting, it this second piece of news today that holds more interest for us. Engineers are developing an App for the iPad and MacBook which will allow users to connect both the devices through either a 30-pin adapter or through the much new lightning to USB cable.

To make things even better, this new App will support up to iOS 5.1.1 which means that even if you have a spare first generation iPad lying around, you can even use that as a secondary MacBook display. The possibilities that this opens up for the iPad, the MacBook and Mac OS X are numerous.

Since the iPad uses a touchscreen as a primary method for input, through this new app users will be able to interact with the MacBook and OS X through a touchscreen as well. However, to make the app work on your MacBook, you're going to need to need Mac OS X 10.9 or up. The app is in development currently only for the iPad and once it becomes available and is not banned, we'll be able to see a great variety of new apps being made available to make use of this added functionality. Sound good? Let us know what you think in the comments section.