2012 has kicked off and as we saw towards the end of 2011 rumors began to surround Apple’s instincts of releasing an iPad 2S and iPad 3. Unfortunately, iPad 2S is not an obvious candidate in the reports lately and its iPad 3 that is gaining more attention. Rumored for a Q3 2012 release according to a report, iPad 3 has already gone into production and will be released in March 2012 with the same high end specifications and improvements which were rumored earlier. 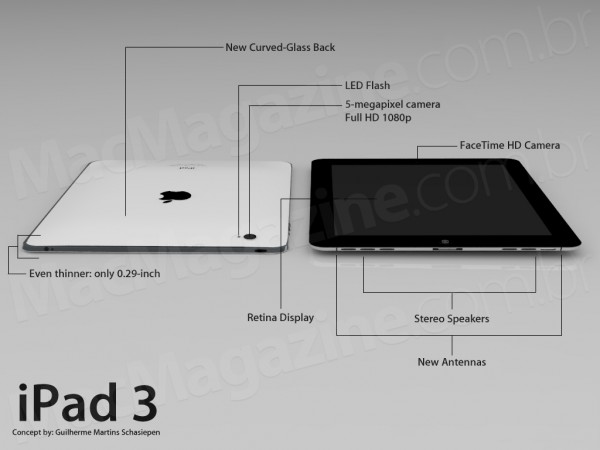 Rumors began back in November when DigiTimes revealed in a report that Apple might be targeting iPad 2S and an iPad 3 in early and late 2012 respectively. However, things have changed as 2012 has begun already. According to a new report from Bloomberg Apple is eyeing for a March 2012 release of iPad 3 which is yet to be announced.

According to the report iPad 3 will be a quad-core device with LTE support and it will feature a high resolution Retina Display with a greater resolution that means more pixels than some HD TVs. Foxconn is still considered to provide a good ratio of iPad 3 components despite rumors spreading that Samsung will be providing the next generation A6 chip for Apple devices which is already under testing as of 2011.

iPad 3 is yet to be announced but things will spice up in the upcoming 8 weeks or so. Apple is intending to break down the market share by crushing its rivals in tablets, most of them which have failed to satisfy the masses. So stay tuned for further updates from the world of Apple.