iOS 9.3.1 vs iOS 9.3 speed test videos have surfaced online and answer the question whether or not Apple's latest firmware release is faster than the previous one. 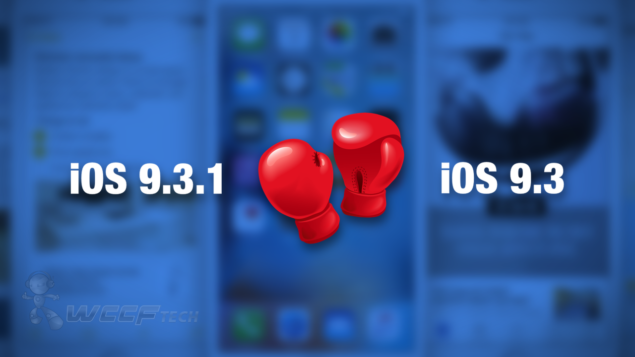 Apple released iOS 9.3.1 a couple of days back and it comes with changes that are barely negligible if you weren't having any sort of problems on your iPhone, iPad, iPod touch in the first place. But for others, it was a case of having their devices crash to bits whenever they tried to open a Safari link from anywhere in iOS. iOS 9.3.1 aimed to address that issue only, nothing else.

With that out of the way, does iOS 9.3.1 bring anything new to the table in terms of performance? A series of videos on YouTube aim to answer that question, and you can check them out down below.

If you're looking for a personal opinion, I would suggest updating to iOS 9.3.1 right away as there's absolutely no noticeable performance difference between iOS 9.3 and iOS 9.3.1. And besides, you also get the fix for the dreaded Safari crash bug issue, even though you didn't ask for it, provided you weren't face with the trouble in the first place. But if you were, then this update is absolutely a pot of gold for you.

Given that we're quite a few versions into iOS 9.x's life cycle, it's clear at this point that we've reached 'peak iOS 9' and things won't get any more better in terms of performance, whether you take into account older or newer devices. And with every new release of iOS, we have to digest the fact that older iPhones, iPads or iPod touches are going to take a hit in terms of performance, as they're rocking hardware that was meant for software released for a certain time period.

It remains to be seen what iOS 10 would do in terms of performance for older devices. Will it pump new life into obsolete hardware, or will it take things extra few miles further? Everything remains to be seen at this point in time.

Expect new software to come out of Cupertino this June at WWDC 2016, where's it's almost certain that Apple will reveal its plans for the future of its mobile and desktop OS. And we for one can't wait to see what Apple has in store for everyone.

iOS 9.3 No Longer Being Signed, Downgrade No Longer Possible