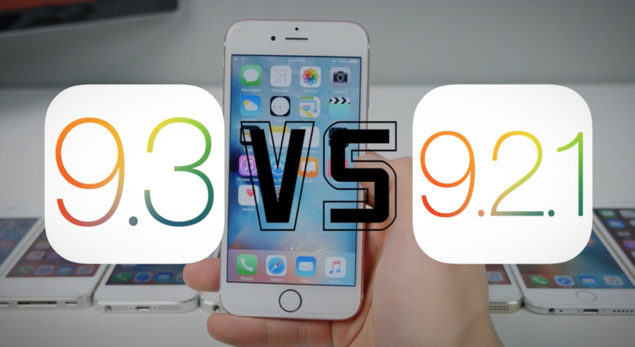 iOS 9.3 download is now finally available for every user around the globe with a compatible device. But the big question on everyone's mind is - is iOS 9.3 final faster than iOS 9.2.1? A video has surfaced on YouTube which answers that question straight up.

Grab a cup of coffee and watch it all in one fell swoop.

As you can see, iOS 9.3 is a tad bit slower than iOS 9.2.1, all thanks to its features set. But, things are a little worse on older iPhone models such as the iPhone 4s, where the device struggles to perform certain tasks and boot-up times are lengthier compared to iOS 9.2.1.

If you have an iPhone 4s, should you upgrade to iOS 9.3? That depends completely on you. If you want the new feature set and bug fixes of Cupertino's mobile firmware, then we highly recommend that you update straight away. If you think performance is at the top of your list, then we suggest holding back for a while. There's quite a possibility that Apple would release iOS 9.3.1 in the coming weeks with more performance enhancements for older devices, while at the same time it's possible that things would turn out quite the opposite.

If you're seeking for a personal recommendation, then I would highly recommend updating to iOS 9.3 final as it enhances the overall functionality of an iPhone, iPad, iPod touch. Apart from new features, Apple has packed in a ton of bug fixes and performance related enhancements for newer devices, something which we all direly need.

One of the key features of the iOS 9.3 update is Night Shift, which works a lot like f.lux, changing the tint of the display as you move towards the night. The warmer tint of the display supposedly helps a user sleep better at night, according to Apple. If you've updated to iOS 9.3 already and want to set up Night Shift, then be sure to check out our guide posted here. Furthermore, iOS 9.3 allows you to lock down your notes using Touch ID as well, and we have a guide covering that as well.

What's your overall opinion of iOS 9.3 and how does it fare against iOS 9.2.1? Be sure to let us know about it in the comments section below.