iOS 9 beta 5 was released just yesterday, and brings with it the usual bunch of bug fixes and performance enhancements. Apart from that, Apple has packed in a few visible changes, such as the addition of 15 new wallpapers and more. But the big question is: how fast iOS 9 beta 5 is compared to the final build of iOS 8.4. A newly surfaced YouTube video aims to answer that very same question. 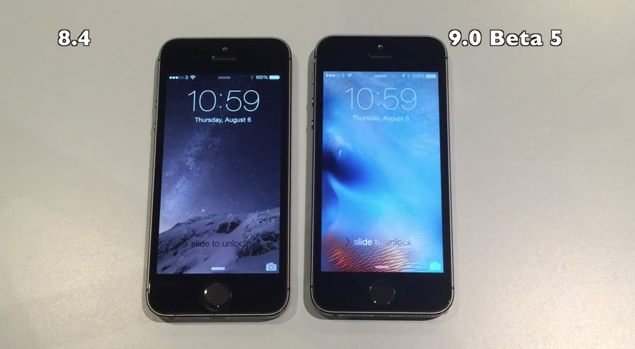 iOS 8.4 was released back in July and brings with it Apple Music and a bunch of bug fixes as well. But the release focusses more on the music bit, rather than any other significant changes. iOS 9 beta 5 on the other hand is, as you already know, pre-release software, currently a work in progress, and has some way to go before it's deemed ready for prime time use. But still, in its current form, iOS 9 beta is very stable on a device such as the iPhone 6 and iPhone 5s, but stutters to death at times on an iPhone 6 Plus thanks to those extra pixels flying around on the display. With that in mind, how do the two releases compare with one another in the performance department running on an iPhone 5s? This video might have your answer:

In the boot test, the iOS 9 beta 5 is a clear winner over iOS 8.4, with the former booting up just a second faster. Then we have the usual suspects in a test such as this: launching stock apps, and again, the difference is speed is barely noticeable. We'll even go on a whim saying that iOS 9 beta 5 is only just slightly slower than iOS 8.4 beta in some places, mainly because it's beta software. Apart from that things look pretty zippy on both releases.

Apps such as YouTube load slightly faster on iOS 8.4, and that's an obvious fact why that is so: because Google's video streaming app is not yet optimized for iOS 9. But we're sure we'll see different results as soon as the Big G pushes out an iOS 9 optimized app in the near future, hopefully come fall time.

iOS 9 beta 5 is the latest pre-release build to come out of Cupertino's gates. And with a few more betas to go before Apple signs off the piece of software as stable enough for prime time, it would be exciting to see how things are going to be like once apps are optimized thoroughly for the company's new mobile operating system.

If you want to give iOS 9 beta a shot right now, then check out: How To Download, Install iOS 9 Public Beta On iPhone, iPad.