According to iOS 9 battery tests carried out by the folks at Arstechnica, there aren't any significant differences when compared to iOS 8 results. For these tests each device was wiped clean before running the tests. The battery test was conducted twice and then average results were calculated, showing only a difference of a few minutes, which could be considered to be "the margin of error." Battery tests confirm that there are "a few noticeable improvements, particularly the iPhone 6 Plus, but no device sees debilitating drops."

One of the major battery-related feature introduced with iOS 9 is the Low Power Mode. However, standard tests couldn't run on the devices with Low Power Mode on as they require the screen to stay active. Geekbench battery test forces the display to stay on, even in these modes, but only showed marginal difference between the results of Low Power Mode and the standard modes. However, battery tests in no way mirror the extended battery life that could be achieved when your devices are on Low Power Mode. These modes, when enabled, lower the screen brightness and turn off background downloads / refreshes, among other settings, that are done to increase the idle time of a device, not the active time while the tests require your device to be constantly active.

Following are the results based on the WiFi battery test that show no major impact on battery life after the upgrade, if you disregard the iPhone 6 Plus. 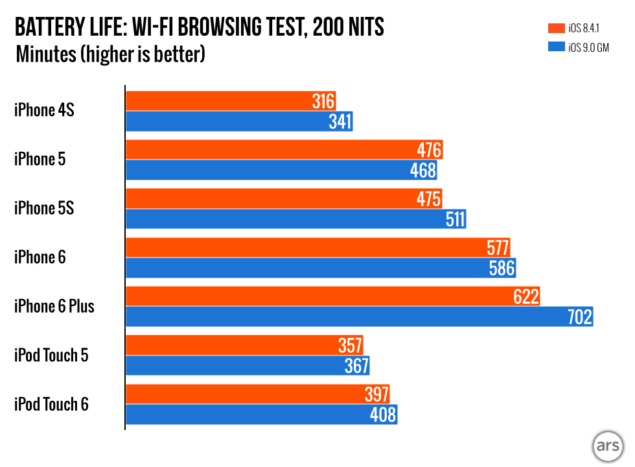 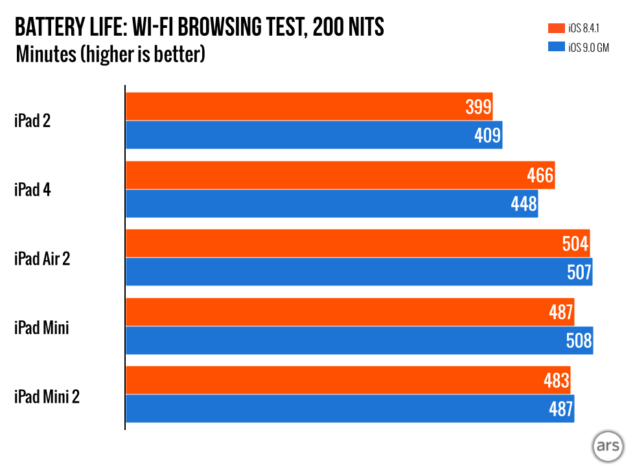 While we expect to get mixed reviews when it comes to battery life on different devices, many have taken to Twitter to share their frustration with iOS 9 battery life:

This extra battery life that iOS 9 was supposed to give us seems to have made my battery worse.

convinced the ios 9 update made my battery worse.

One iPad 4 user is facing more critical troubles with the charging and battery, but these are expected flaws that happen more often than not when you upgrade to a new operating system.

Yes, it does feel a little disappointing, but hey, at least it hasn't worsened things, not for a majority of users anyway. As more apps are optimized for the new OS and incremental updates hit the devices, we might experience improved battery life and smoother performance on our iOS devices.

No matter what reviews you are getting, it is important to make this upgrade right away as iOS 9 carries a fix for a very critical AirDrop vulnerability that opens your device to attackers within the Bluetooth range. Not really convinced if you should make the move? Read our detailed iOS 9 review to decide if you like the updates, optimizations and feature enhancements that Apple has brought in with its latest mobile operating system.

Don't forget to share your experience with the new operating system so far. Are you experiencing improved battery life or do you agree with these tests? Let us know.