iOS 6 was publicly released a couple of months back and up till now it has done very well in the market. Nevertheless a new software almost always comes with its fair share of bugs. That is exactly the case with iOS 6. There were many things that needed fixing, most notably the Maps application which is simply horrendous. Apple is working on it and hopefully all those issues will be ironed out in the update due to release in the near future. 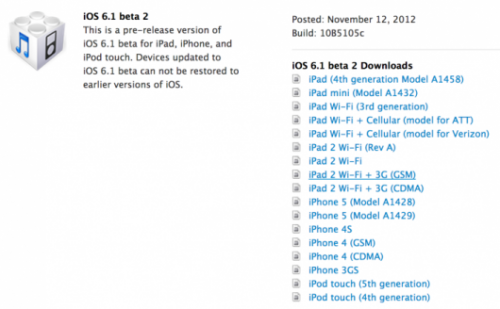 iOS 6.1 beta 2 comes with various bug fixes and improvements. Apple has also made improvements to its home grown Maps application. The Maps debacle was so bad that Apple CEO Tim Cook had to personally apologize to users. It is believed that the reason Scott Forstall was ousted from Apple is because of his refusal to sign the apology letter, which turned out to be the final nail in the coffin of his career at Apple. That aside though, it remains to be seen what Apple ends up doing with the Maps application without the former SVP of iOS software at the helm anymore.

For the uninitiated, beta firmware is only made available to registered developers. If you are not a registered Apple developer you are not entitled to download iOS 6.1 beta 2 IPSW for your iPhone, iPad or iPod touch. Beta firmware is not meant for the general public and even if you do get your hands on an iOS 6.1 beta 2 IPSW it is advised that you do not mess around with it.

However if you really do want to try out beta firmware, you can get yourself registered as a developer with Apple. A developer account costs 99 dollars per annum. It is a steep sum to pay but it allows you to legally download iOS 6.1 beta 2 IPSW for your particular iOS device.