Yesterday Apple released iOS 6.0.1 for iPhone, iPad and iPod touch to the public. This new update comes with a plethora of bug fixes, security and performance improvements. Being a minor update, one should not expect any new features from iOS 6.0.1. However Apple has a major platform update of iOS 6 in the pipline. The company has officially seeded beta 1 of iOS 6.1. The iOS 6.1 beta 1 IPSW is now available for download. 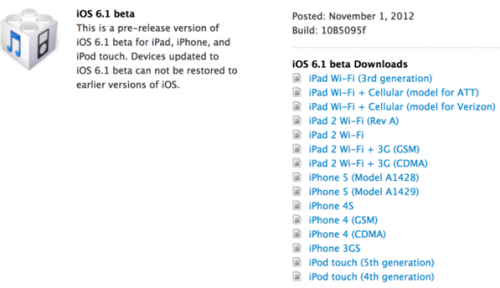 Usually changelog of a beta iOS firmware is made publicly available. However that is not the case with iOS 6.1 beta 1. There is speculation that the registered developers have been committed to a non-disclosure agreement so as to prevent any details regarding the features of iOS 6.1 from getting leaked. It is nonetheless known that iOS 6.1 beta 1 features many bug fixes and improvements, most of which were publicly pushed out in iOS 6.0.1.

There is speculation that Apple has been working on a fix for Apple Maps, which will be released with iOS 6.1. The Apple Maps application has received numerous horrendous reviews up till now. It is also believed that this is the reason behind Scott Forstall's departure from Apple. Surely Apple will release substantial fixes for its home grown Mapping service, as right now its standards not befitting that of a service offered by Apple.

So if you are a registered Apple developer, you can download iOS 6.1 beta 1 IPSW from the Developers Portal right now. There is no word yet as to when Apple intends to publicly releasing iOS 6.1 for iPhone, iPad and iPod touch. Rest assured, we will be there to let you know when that happens.