Its sad to hear that iOS 6.1.3 untethered jailbreak will not be possible. The evasi0n untethered jailbreak was released earlier this month and it has helped millions of iOS devices around the world to break free from the limitations that Apple has set out. The best part about evasi0n is that it is compatible with all new iOS devices as well, such as iPhone 5, iPad 4 and iPad mini, to name a few. According to a new report, the software folks at Apple are hard at work and are patching vulnerabilities that evasi0n exploits. 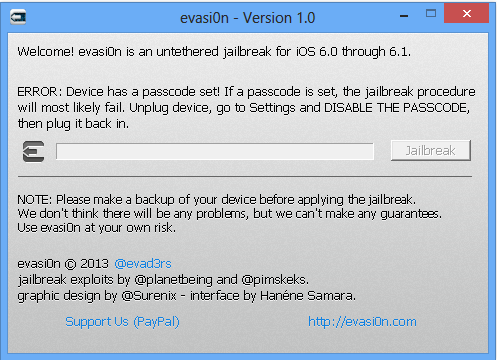 Legendary jailbreaker David Wang a.k.a @Planetbeing recently spoke with Forbes and revealed that an iOS 6.1.3 untethered jailbreak is off the table. He explains that Apple has already patched one of bugs that evasi0n uses in iOS 6.1.3 beta 2, and is likely to patch the entire thing up soon. We expected Apple to be swift on this, but no patches were rolled out with iOS 6.1.1 or iOS 6.1.2 incremental updates. The streak however ends with iOS 6.1.3.

The bug that Apple has currently patched in iOS 6.1.3 beta 2 relates to Time Zone settings. Readers need to understand that when it comes to software vulnerabilities, there's always a domino effect. This means that since the Time Zone vulnerability has been patched, evasi0n will not work to provide an iOS 6.1.3 untethered jailbreak. One would say why not replace that particular vulnerability with another one, yes that could be done, but do we really expect Apple not to release iOS 6.1.3 without first applying an airtight patch on evasi0n untethered jailbreak vulnerabilities?

At this point there is no indication that Apple is rushing to get iOS 6.1.3 update out the door. It could take up to a month for that to happen. After this patch, it remains to be seen where the jailbreak development stands. Many are not hopeful of the future of jailbreaks, with some even believing that evasi0n is the last jailbreak ever to be released for iOS devices. I have a different outlook on that, however. I firmly believe that Apple will keep building, and jailbreak developers will keep cracking, no matter how long it takes them to do it.

A sincere advice to all jailbreak lovers is that they should either retain their current firmware or update to iOS 6.1.2 and then perform a jailbreak. Once iOS 6.1.3 is released you will not be able to upgrade from your current firmware to any of those supported by evasi0n. Who knows, maybe there never will be an iOS 6.1.3 untethered jailbreak release.