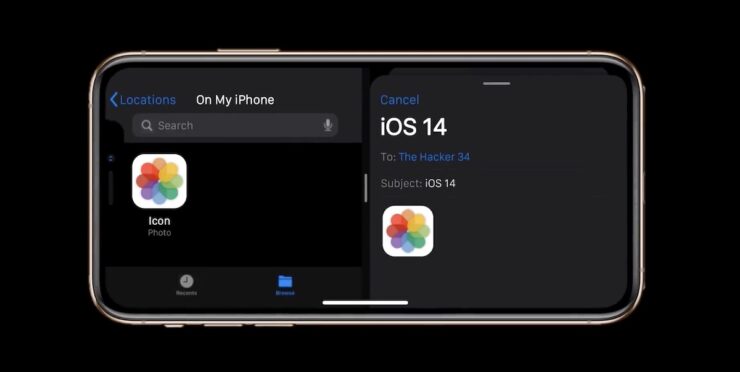 Apple just released iOS 13 and iPadOS last month, and is constantly releasing updates to fix any bugs and add delayed features. Although iOS 14 is going to be revealed at WWDC 2020, it has not stopped people from coming up with concepts on how the future update will look like and what it's features would be.

This new concept video by YouTuber the Hacker 34 has been put together very nicely and looks similar to how Apple creates iOS videos nowadays. The concept imagines a number of features including new icons, a new smaller call user interface, GIFs integration in keyboard, split view on iPhone, user account switching, lock-screen complications with an always-on display, ability to change default apps, and app icon placement anywhere on the home screen.

Some of these features are from the top of our iOS feature wishlist. The ability to change default apps would be amazing, and it is about time that Apple includes it in iOS 14. Users can uninstall default apps but all system-wide links (like email) still point to the built-in apps. Instead of allowing  users to chose alternative apps, iOS just throws in an error.

Other features like GIF integration look interesting. Although iOS keyboard already supports GIFs, the video imagines the iOS 14 keyboard to have a GIF search button in the space below the keyboard on OLED iPhones. Apple already keeps the emoji icon there so why not add more? I have yet to accidentally press the emoji icon so I imagine I would not do that even if there are more icons there.

The phone call user interface should really become smaller in iOS 14. The iPhone and iPad are gaming consoles now thanks to Apple Arcade and games like Fortnite and Call of Duty, but it takes just one phone call to disrupt your gameplay. Phone calls, whether FaceTime or cellular, take up the whole screen in iOS and users hate it.

Lock-screen complications might become a reality someday when Apple switches to LPTO OLED displays, like they did for Apple Watch Series 5. These displays can stay on without impacting battery life or risking burn-in.

I can't imagine Apple implementing split view on iPhone because the apps will look horrible. User account switching would have to come to iPadOS before it ever comes to iOS.

Check out the complete video below and let us know what you think.