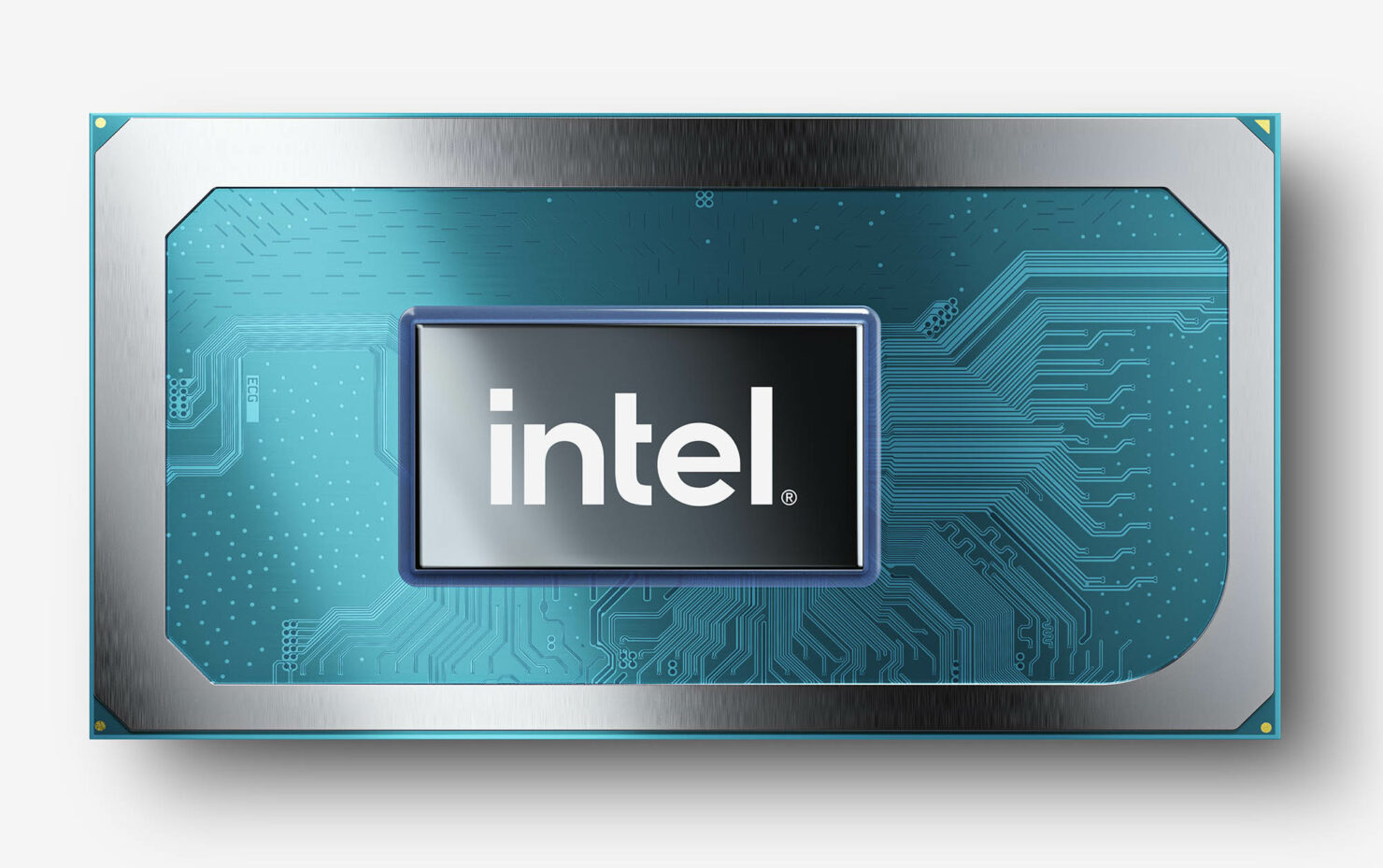 Intel had already launched the first iteration of Tiger Lake some time ago on the 10nm SuperFin process and it was a work of art. It had a single-core score in Cinebench that was the only x86 processor to beat the Apple M1 but had one major flaw: it was limited to just 4 cores. Now, the company has rolled out an 8-core version, dubbed Tiger Lake H on its mature 10nm process and the results are spectacular. After spending almost a decade on 14nm, Intel finally has powerful mainstream processors out on a sub 14nm process.

Before we get to the interesting stuff, Intel is launching a total of 5 consumer SKUs right now. Three of them are eight cores (with 16 threads) and two of them are six cores (with 12 threads). Intel has managed to retain a surprising amount of clock speed from the uber-mature 14nm process. The H series has a TDP envelope of 45W and is built for the laptop class we call luggables although the TDP is configurable down to 35W for energy-conscious vendors.  Unfortunately, Intel hasn't scaled up graphics horsepower along with the compute and users will still get 128 EUs of Xe Graphics in the package.

Now let's talk benchmarks. Before we begin, keep in mind these are first-party benchmarks so that pinch of salt is *always* advisable but considering the margin we are seeing in these numbers, it is unlikely that AMD's parts will have performance leadership (although energy efficiency leadership remains to be seen). In a battle of flagships, first off, we have the Core i9 11980HK vs the AMD Ryzen 9 5900 HX. The Intel part comfortably beats out the AMD part with a margin of almost 20% on average. This isn't even a battle at this point - it's a slaughter. It is worth noting that AMD's laptop was actually using 10W more power for its GPU and still lost. 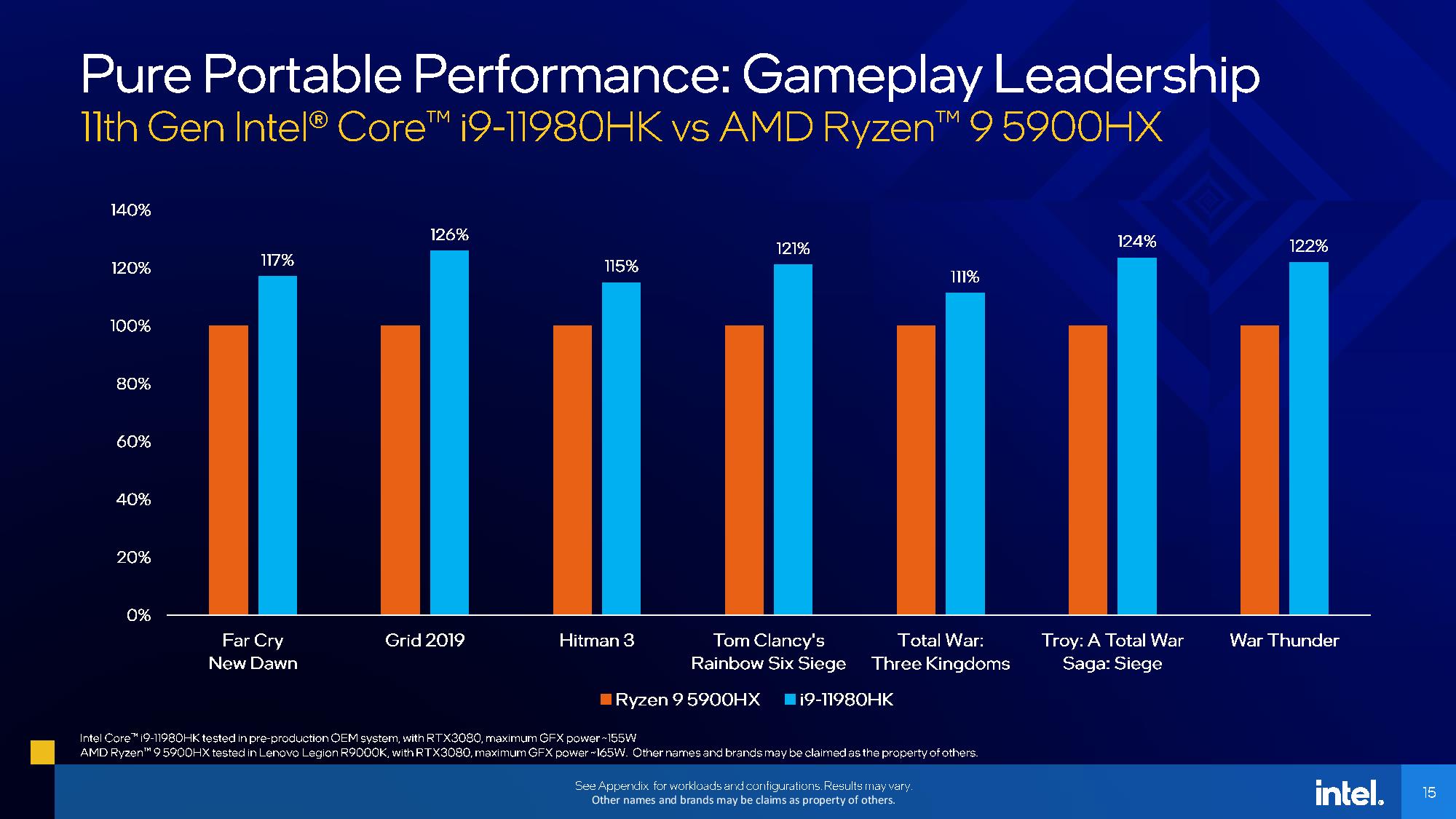 Up next we have the mid-range Core i5 taking on the AMD Ryzen 9 5900 HS high-end processor - and winning. This isn't as clear a win as the 11980HK as the parts trade blows but considering the Core i5 is a mid-range part while the Ryzen 9 5900HS is a high-end part shows that Intel is clearly flexing here. 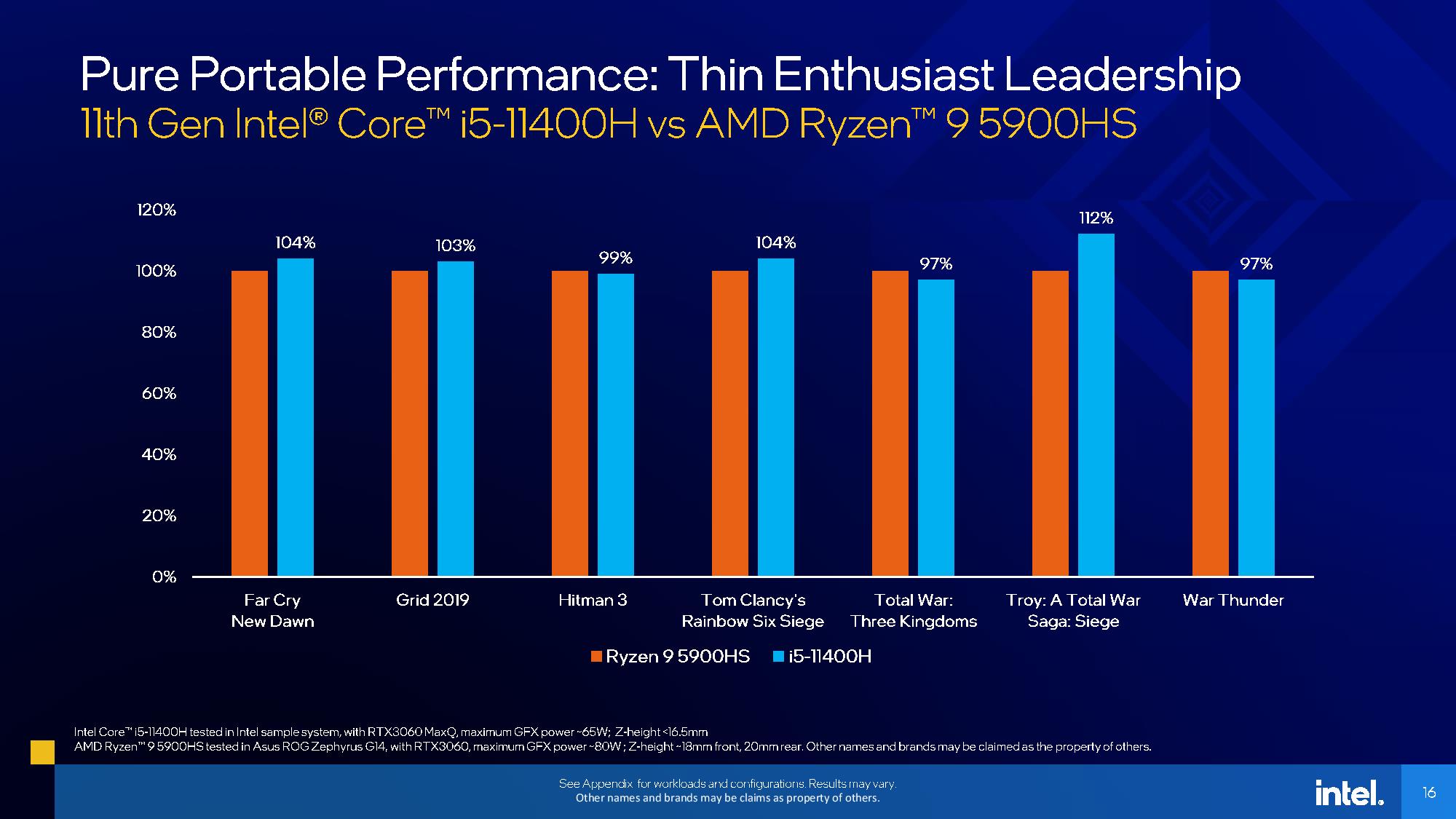 Finally, Intel has also compared the performance gains against the last generation of processors and there is an almost 19% gen over gen difference - which is amazing and the kind of performance gains we were used to seeing form Intel in the old days. 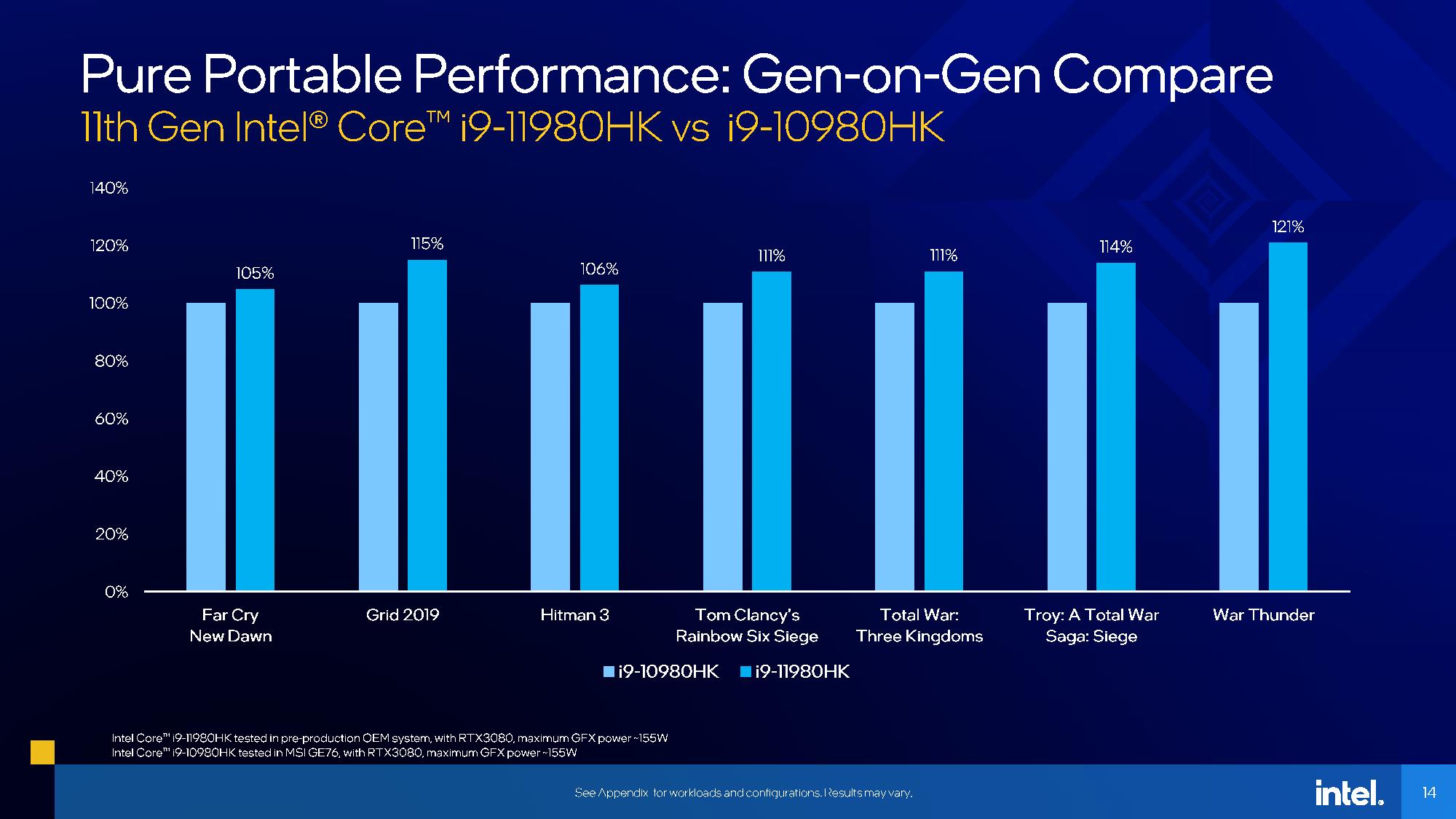 Intel has put on an absolutely spectacular show with its Tiger Lake H series and now we can only wait and see how they do with 10nm desktop and Meteor Lake. This might be too soon to say it - but could Intel be back? 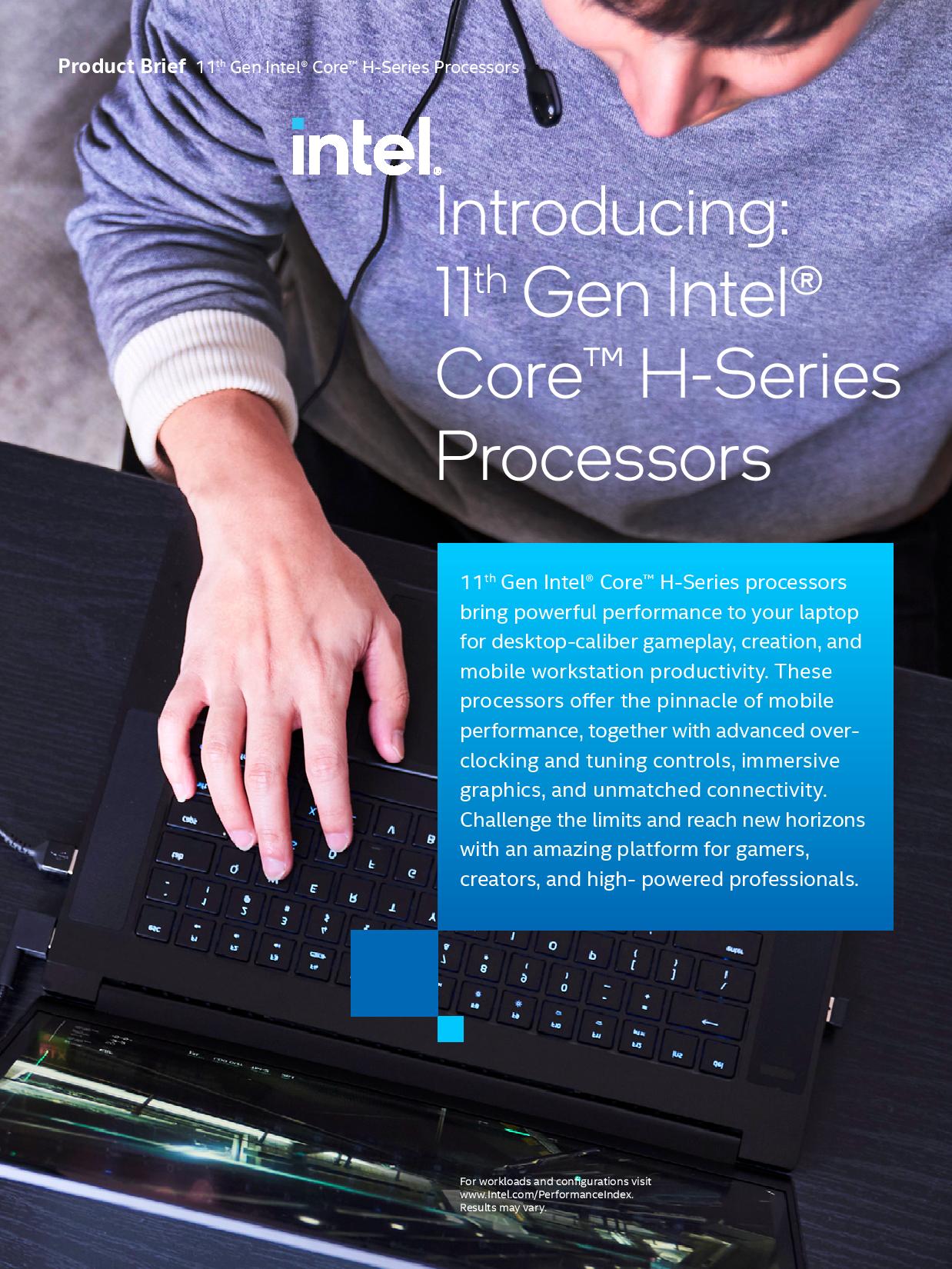 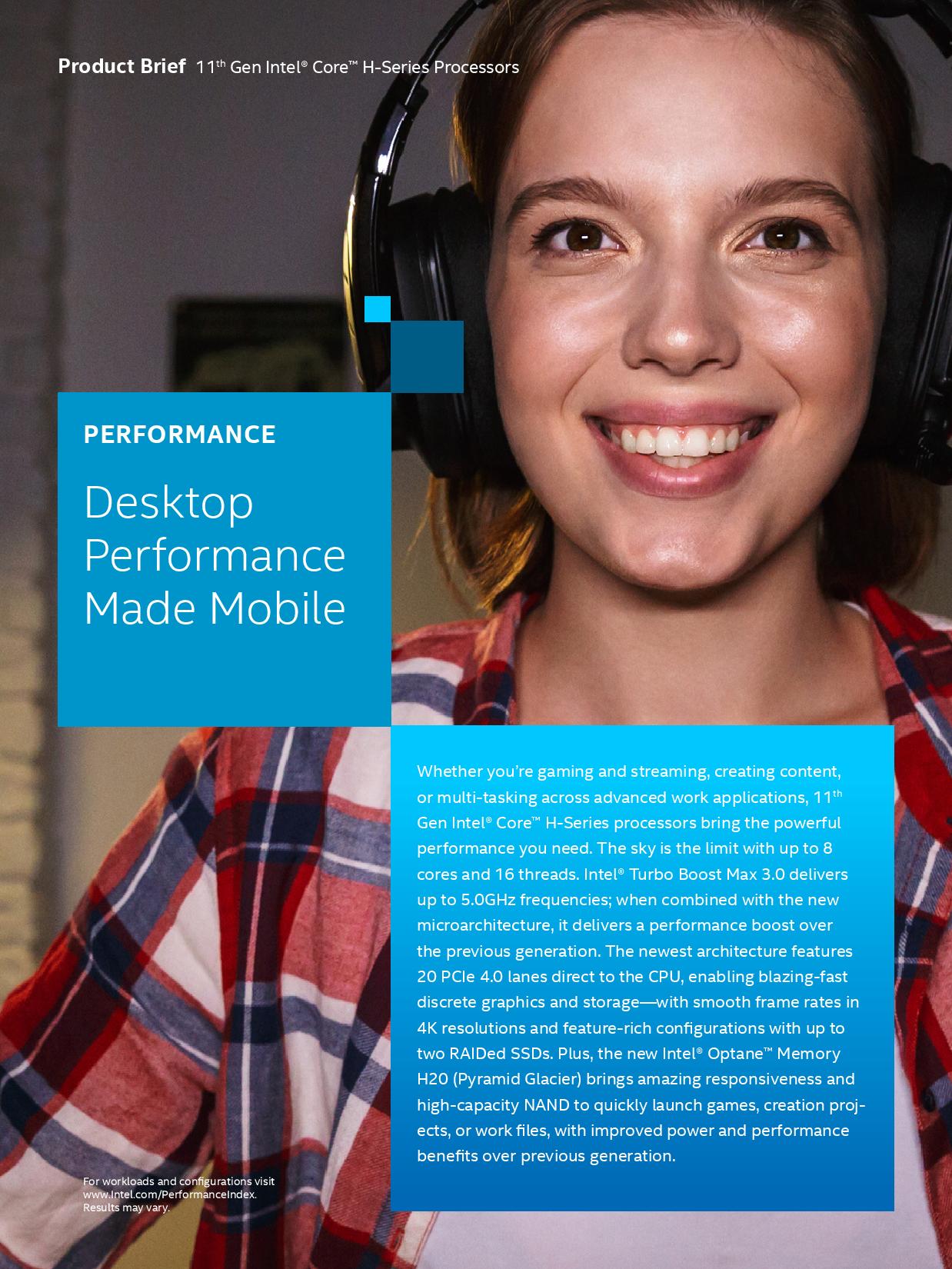 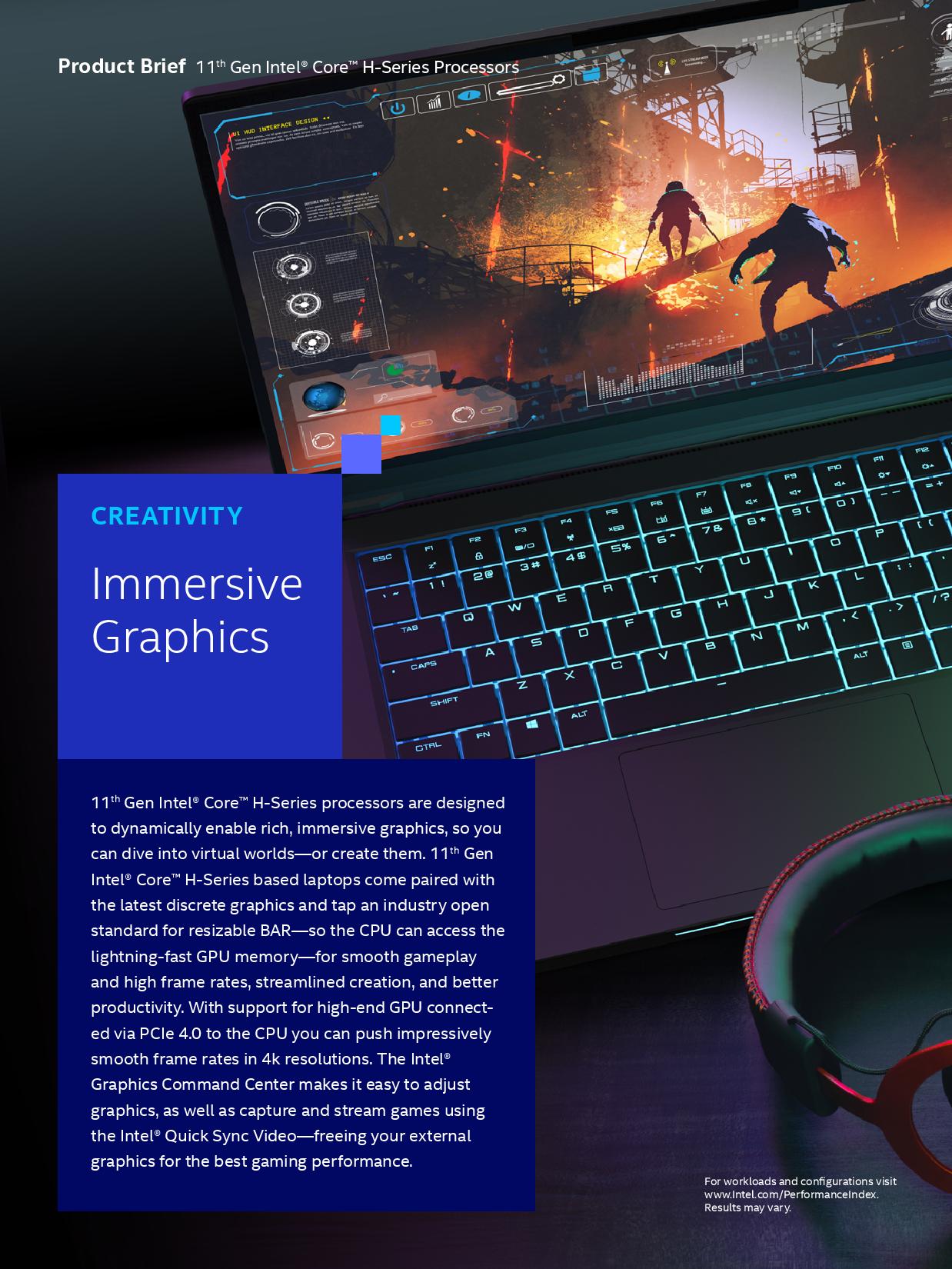 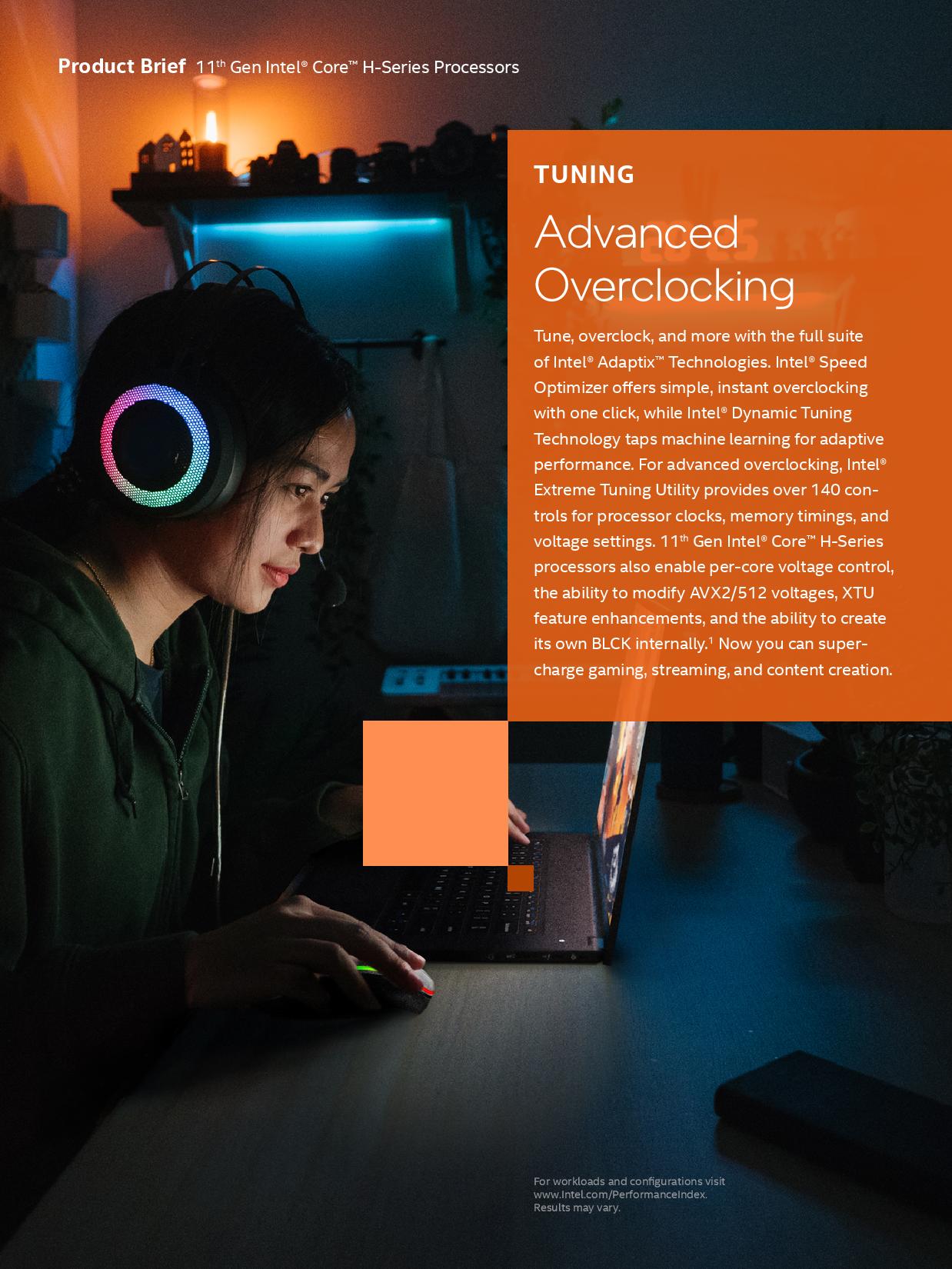 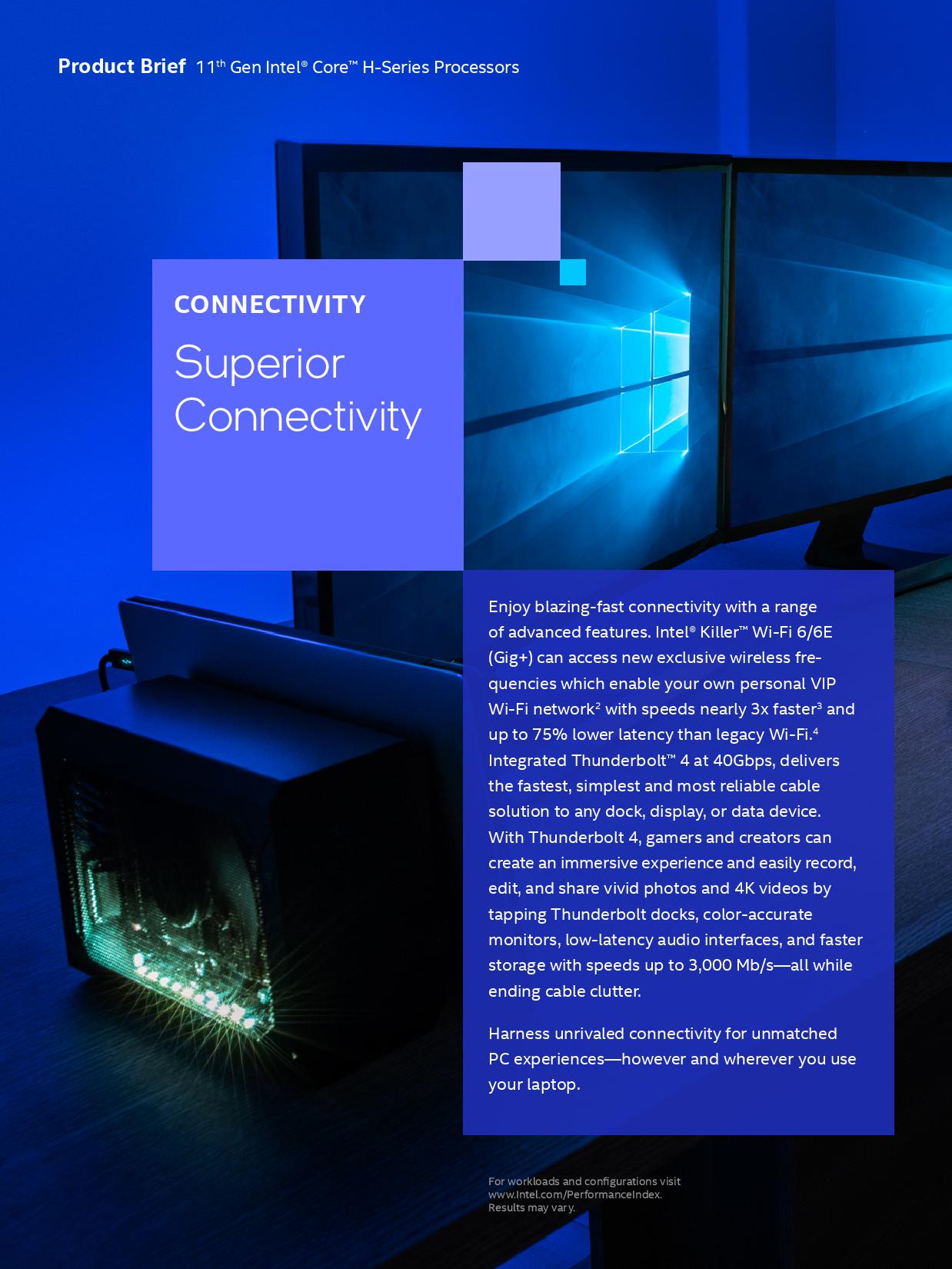 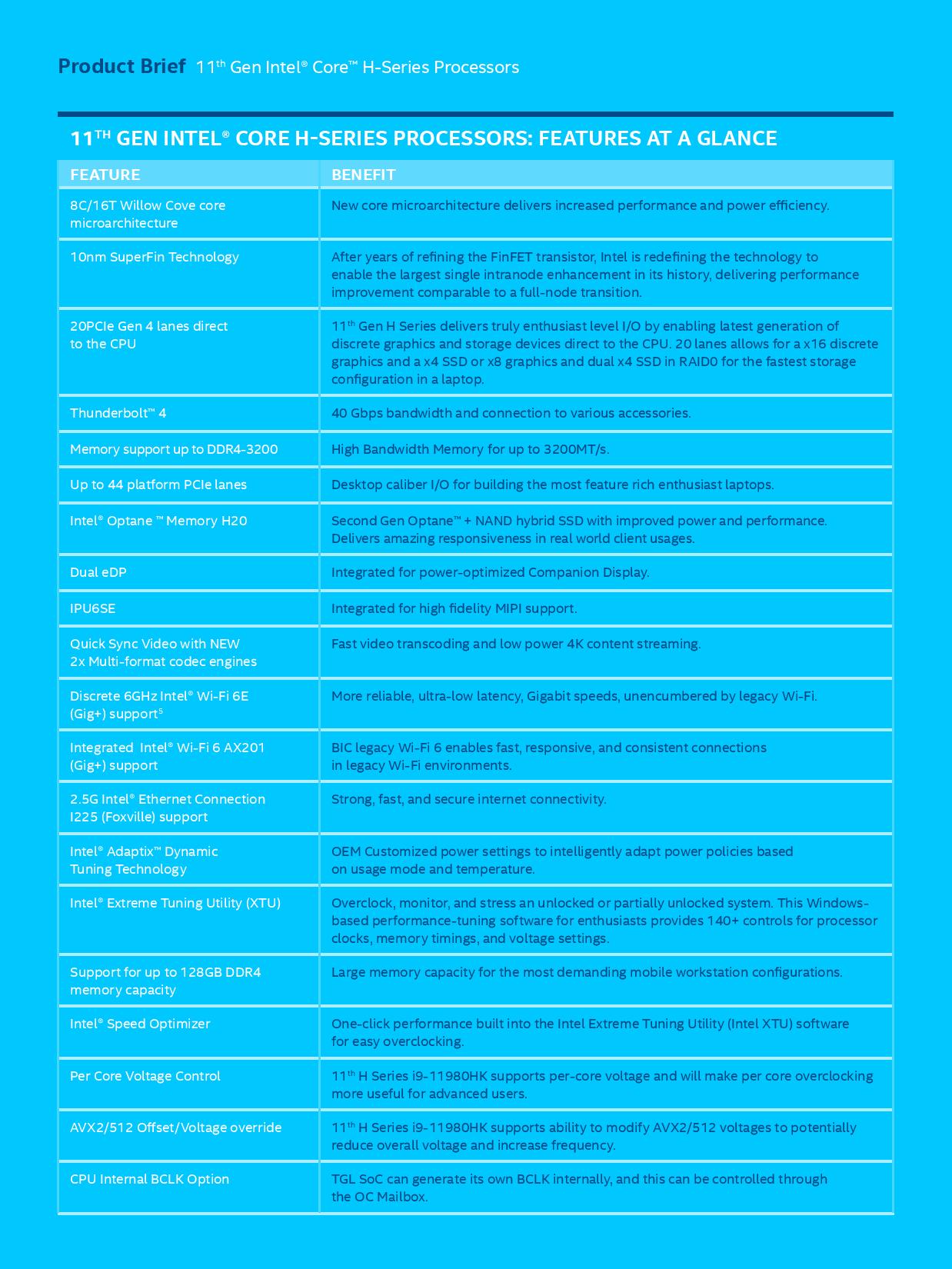 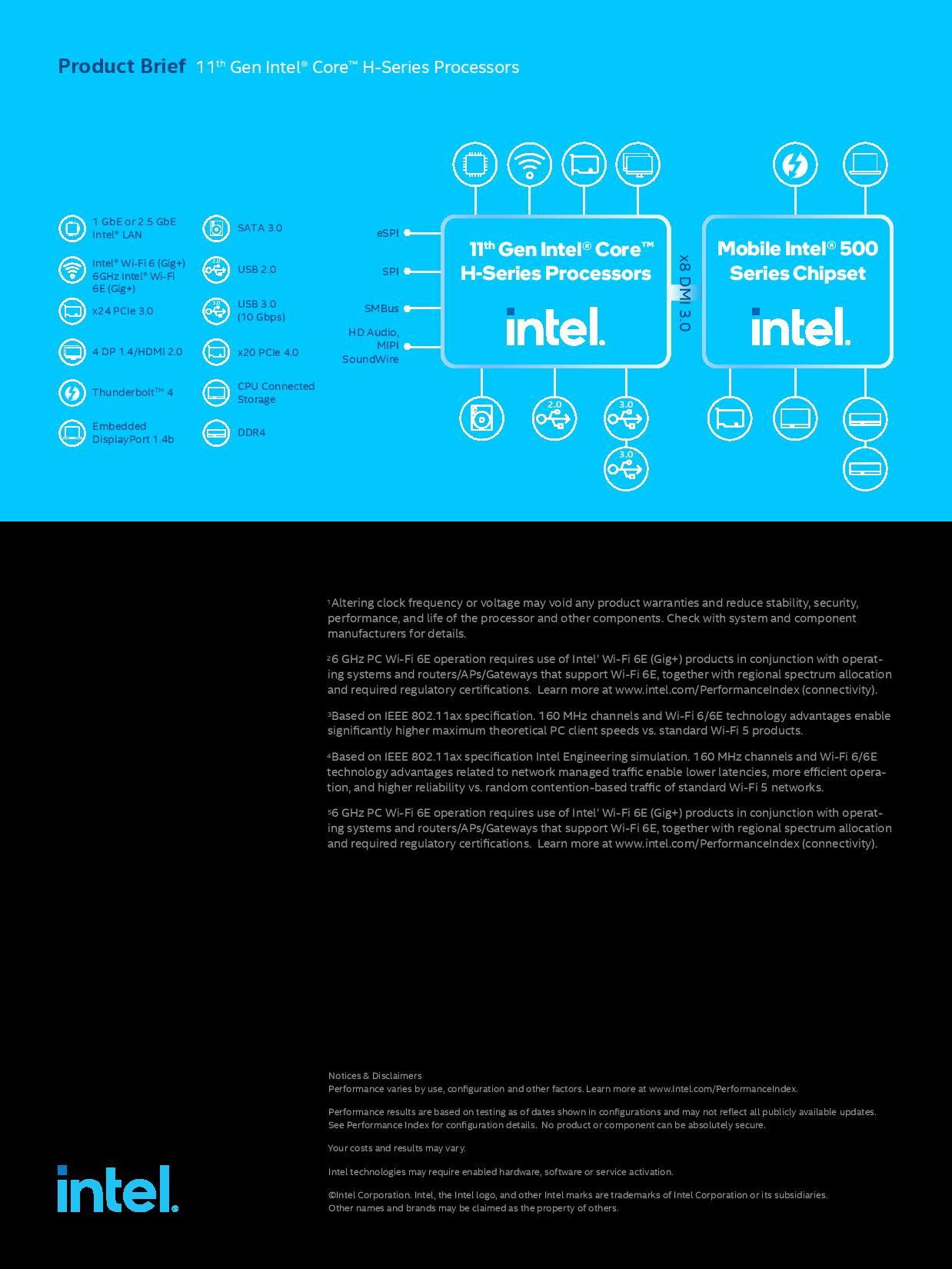 About the Diversity of Designs with Broad Availability: 11th Gen Intel Core Mobile H-series and Intel® Xeon® W-11000 series processors will power more than 80 enthusiast laptop designs across consumer, commercial and workstation segments this year. With more than one million 11th Gen H-series processors shipped to Intel partners worldwide by launch, whether it’s for high-refresh gaming, robust content creation or mobile workstations, no one offers people more choices and availability when it comes to mobile computing.

Performance results are based on testing as of dates shown in configurations and may not reflect all publicly available updates. Performance varies by use, configuration and other factors. Learn more at www.Intel.com/PerformanceIndex.

Your costs and results may vary.

Intel contributes to the development of benchmarks by participating in, sponsoring, and/or contributing technical support to various benchmarking groups, including the BenchmarkXPRT Development Community administered by Principled Technologies.

Altering clock frequency or voltage may void any product warranties and reduce stability, security, performance, and life of the processor and other components. Check with system and component manufacturers for details.