It was previously speculated that the Haswell TSX bug would prove impossible to fix via a microcode patch and this seems to have been confirmed by documents spotted by BitsandChips.it. Patches to the microcode can only do so much and if the bug is hard coded into the processor, then there really isn't anything Intel can do about it without an impossible-in-real-life mass recall and replacement strategem. 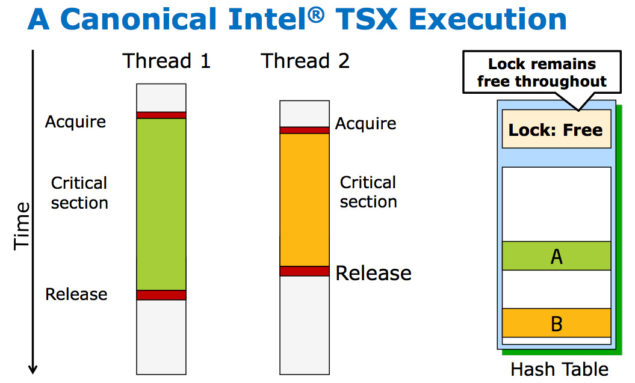 To those who don't remember the issue, TSX stands for Transactional Synchronized eXtensions and deals largely with enterprise-related matters such as database handling, not really something that affects the wide majority of the mainstream consumer spectrum. Intel summarizes the TSX Bug as "under a complex set of internal timing conditions and system events, software using the Intel TSX (Transactional Synchronization Extensions) instructions may result in unpredictable system behavior" with the full detail present over here. When it was initially discovered, Intel's PR made the following statement:

“We have addressed the TSX issue with the release of a microcode update that disables TSX on current steppings of the affected Haswell and Broadwell products,” an Intel spokesman said in a statement. “Longer term, Intel is committed to correcting the issues with TSX and enabling the feature on future processors.”

The statement implies that the patch would be fixed in the future either via another microcode update or succeeding SKUs. The only thing that actually seems serious is that the Xeon E5 V3 processors, who do have this bug, and who are enterprise class SKUs, will never see the TSX bug cured. The TSX instruction set will remain permanently deactivated in any such server or workstation, provided you have applied the latest patch. Intel Xeon E5 V3 owners will now have a decision to make: apply the microcode patch and disable TSX or keep the CPUs as they are and risk data corruption or instability. Although if the workload is entirely dependent on TSX then there is no choice but to downgrade to Ivy Bridge till Broadwell arrives.