Intel has once again confirmed that their next generation core processor family, codenamed "Skylake" will be launching during the second half of this year. The details revealed by Intel at the IDF15 (Shenzhen) don't include anything we haven't heard of before but the announcement is a sort of confirmation amid rumors which predict that the Skylake generation of processors would be delayed further on. 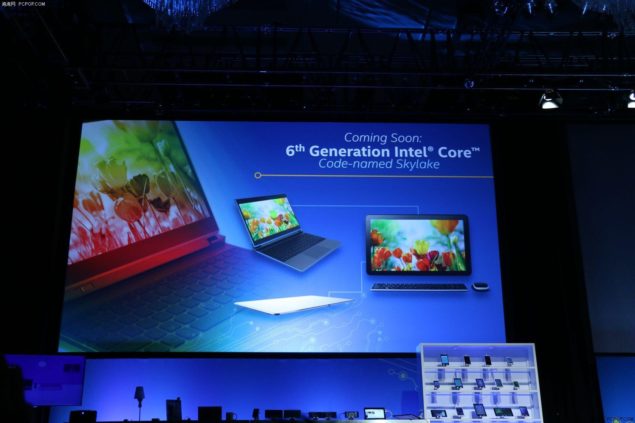 The Skylake generation of processors is said to deliver a boost in IPC and power efficiency compared to Haswell and Broadwell which focused largely on process improvements and reducing power consumption. Both Haswell and Broadwell did well on the mobility market and Haswell has sold well on the desktop market during its two year life span. The current generation core family, codenamed "Broadwell" is currently mobile only with the M, Y and U series chips already selling to consumers in the market. The desktop chips based on the Broadwell core architecture are supposed to launch in Q2 2015 which will include two variants, the Core i7-5775C and Core i5-5675C. Both processors are quad cores with 14nm core architecture, featuring GT3e (HD 6300 Iris Pro) graphics and have embedded DRAM as LLC (Last-Level Cache). The processors would be unlocked, allowing enthusiasts to overclock these chips and will retain compatibility on current Z97 motherboards with BIOS updates.

These two processors aren't meant to replace the Haswell desktop family, replacing Haswell is Skylake's job and it is ready for one spectacular launch in 2H 2015, just around IDF15 in San Francisco. Some key elements or details for the Skylake processors as you wish to take them include compatibility with the 100-series chipsets which will be readily available for shipment starting May 2015. This gives AIB partners of Intel enough time to ramp up motherboard production for launch with Skylake processors. To my surprise, there are already a few Z170 products listed on the internet along with concept designs of upcoming Z170 series motherboards. There are several other chipsets which come in Q/H/B branding which will be used to categorize the motherboards with respect to their market placing.

Skylake processors will be available in dual and quad core models and the graphics chip will be updated to the Gen9 design which will leverage graphics performance across the lineup. Upgraded memory controllers will allow support for both DDR4 and DDR3L memory. The socket for the Skylake generation of processors will be called LGA 1151 which indicates there will be 1151 pins on the socket and a total new connect path for the 6th generation processors.

Skylake will be termed the quickest transition in Intel's history as they plan to replace the entire mobility line in 2H 2015 which was launched with Broadwell a few months ago. The desktop series which is denoted by the Skylake-S naming scheme will include several models, including K-Series unlocked models.  The Z170 would be the flagship performance chipset which will support the unlocked K-Series Skylake processors. The chipset will feature up to 20 PCIe Gen 3 lanes, 6 SATA Gen 3 ports, 10 USB 3.0 ports and a total of 14 total USB ports (USB 3.0 / USB 2.0), up to 3 SATA Express capable ports, up to 3 Intel RST capable PCI-e storage ports which may include x2 SATA Express or M.2 SSD port with Enhanced SPI and x4/x8/x16 capable Gen 3 PCI-Express support from the processor.

Other highlights of the presentation were the Atom x3/x5/x7 Cherry trail parts along with several wireless connected products. The bulk of the details on Skylake and Broadwell are still kept hidden and we can expect motherboard vendors to go all out with their concept and design showcases during Computex 2015 which starts in the first week of June.