Intel is releasing their HEDT Haswell-E processors in the coming months which includes the flagship Core i7-5960X CPU. Since the processors are built for the high-end desktop market, their target audience would be overclocking fanatics and enthusiasts. My friend, Kevin Owi at OCDrift has revealed an interesting feature regarding the new processors which will help overclockers in setting the fastest frequency records. 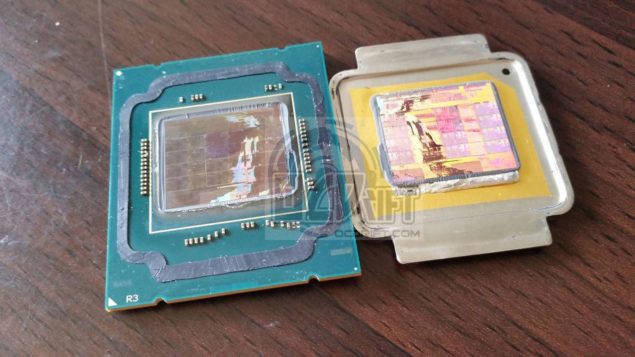 Kevin was able to get hold of an Intel Core i7-5960X processor which will be the flagship part of the Haswell-E lineup and de-lidded it to reveal that it makes use of soldered thermal interface material instead of inferior thermal paste material which was featured on Ivy Bridge and Haswell processors which is blamed as one of the reasons for the high temperatures we got to see on those processors aside from the fully integrated voltage regulator (FVIR) which is being phased out after Broadwell generation of processors.

The Core 4000 series processors based on the Haswell microarchitecture were launched a year ago at Computex 2013. The processors featured the latest 22nm core 3D Tri-gate transistors technology which improved the IPC and efficiency by a decent amount of Ivy Bridge. While the Haswell processors were met with a great response and backed by a variety of overclocking features, the processors didn’t happen to be great at overclocking due to the cheaper application of TIM between the IHS (Internal HeatSpreader) and the Haswell silicon itself which resulted in the heat to remain trapped between the chip due to poor contact.

Intel partially fixed this issue with the launch of their K-Series Haswell processors a year later, codenamed Devil’s Canyon which offer users an improved design that incorporates updated packaging materials, improved TIM (Thermal Interface) and processors that are specifically re-engineered for enhanced performance and overclocking. To be specific, Intel used a Next Generation Polymer Thermal Interface Material (NGPTIM) inside their Devil’s Canyon processors offering better heat dissipation to allow overclocking. However, even that TIM solution wasn't enough to cool the devil as there was still not enough contact between the die and heatspreader as can be achieved with a soldered design.

The Haswell-E line of processors are built on the same 22nm Haswell microarchitecture but they are geared for the high-end and sever audience and with huge price tags, there remains no reason for Intel to skim down on a feature which the market would be most concerned about. Haswell-E may be geared towards high-end desktop PCs but it is also a platform which several people buy for server and workstation needs considering they are cheaper than their Xeon based counterparts. This demands stability and proper thermal specifications which can only be achieved by properly dissipating the heat between the large die on the HEDT processors. Soldered TIM is the way to go, hence this is a great news for overclockers and enthusiasts alike. Aside from the TIM news, this is also the first time we are looking at a De-lidded Haswell-E processor featuring 8 Cores, 16 threads, 20 MB L3 cache, 3.0 / 3.3 GHz clock frequencies, 140W TDP and a $999 US price tag.

However, during the process, the processor die was damaged as it requires immense pressure and care to remove the heatspreader from a soldered surface. We can see the remnants of the die on the IHS itself which means the processor is no longer of use. Additionally, there seems to be some interesting speculation on some forums regarding the die itself as we can note that there are 12 Core modules on the die so the 5960X could be a disabled Xenon variant or we might just be looking at a Xenon variant however the source has specifically mentioned this to be a Core i7-5960X processor. The entire specifications of the Haswell-E lineup are listed below:

The Intel Core i7-5960X Extreme Edition would be the flagship processor of the lineup boasting 8 Cores and 16 threads. This would be Intel’s first 8 Core consumer processor and would be clocked at 3.0 GHz base and 3.3 GHz boost frequency. The processor would feature 20 MB of L3 cache, 140W TDP and support for DDR4-2133 MHz memory. Being the flagship processor of the Haswell-E lineup, the Core i7-5960X would end up with a price of $999 US. While there have been rumors that the pricing would behigher than previous generations, Im almost certain that Intel will keep their pricing structure of the HEDT lineup same as previous generation Sandy Bridge-E and Ivy Bridge-E processors.

The Core i7-5930K would be the second best processor of the flock featuring 6 cores and 12 threads. Featuring a clock speed of 3.5 GHz base and around 3.9 – 4.0 GHz boost, the Core i7-5930K would integrate 15 MB L3 Cache and a TDP of 140W. The processor would be able to support DDR4-2133 MHz memory. From specifications, the Core i7-5930K looks a lot like the current generation Core i7-4960X processor however we are looking at better IPC due to the improved Haswell microarchitecture. Pricing is suggested close to the $550 US range.