Intel to roll out 32nm Core i3, i5 and i7 chips for laptops and desktops

As per reports Intel is all set roll out Core i3, i5 and i7 processors, come January 7th, 2010 (CES). These processors will be based on 32 nm production technology, resulting in more power-efficient and faster chips.

All in all, Intel is set to introduce 17 new processor chips.

The three ranges (High, Mid and Low) of processors are described in the figure below. 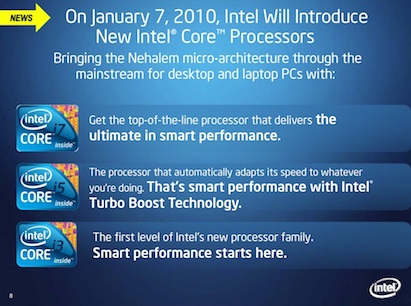 This is in addition to the 'Arrandale' family of mobile processors, meant for use on netbooks - which features a GPU function along with two processing cores on the same chip resulting in a very power efficient chip. This chip will be based on a 45-nm production technology.

Intel is also moving its "Turbo Boost" technology into more Core i5. Turbo Boost speeds up and slows down individual cores to meet processing and power-efficiency needs, respectively.