The Intel Skylake-H lineup that includes performance oriented Core and Xeon processors has been leaked and details the several chips that will be launching in the months ahead. The Skylake-H lineup will consist of many SKUs that fall in the Xeon, Core (Core i7, Core i5, Core i3) and Celeron brands. The lineup you will see today will be integrated in a range of high-performance to entry level mainstream notebooks. 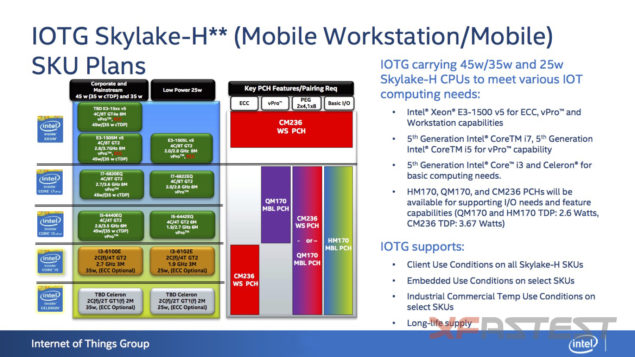 With Skylake-H, Intel is going to introduce the first fully DDR4 compatible mainstream notebook platform in the consumer market. There are going to be two series for the Skylake-H lineup, the corporate or main stream 45W and 35W chips alongside the low power 25W chips. But before getting to know the processor details, let's take a quick glance at the the four platform control hubs that are powering the new platform. First up we have the HM170 which will offer the most basic I/O features on the mobility platform and will be integrated on Celeron tier chips. The QM170 PCH will be part of the mainstream processors with vPro functionality and PEG (2x4, 1x8) support along with other features. The CM236 chipset will power Xeon based workstation platform with support for ECC memory, Intel vPro, PEG and other necessary features. The HM170 and QM170 chipsets will features TDPs of just 2.6W while the CM236 chipset will have a 3.6W TDP.

Introduced along side the Skylake unlocked processors, the Skylake-H Mobility Workstation platform will include the Xeon E3-1500M V5 family processors. Intel kept their announcement short and didn't reveal any SKUs for their new Xeon family but that is not the case anymore. We know that Intel plans to launch three Xeon E3-1500M V5 processors which will include the top tier Xeon E3-15**M V5 (Name TBD) that comes with 4 cores and 8 threads. This chip will feature 8 MB of L3 cache and also feature GT4e Iris Pro graphics chips with up to 128 MB L4 (eDRAM) cache. Clock speeds are not yet determined but the chip comes with a 45W TDP that is configurable down to 35W depending on work loads.

The Core i5 lineup includes the Core i5-6440EQ with four cores and four threads, featuring clocks of 2.6 GHz base and 3.5 GHz boost. The chip comes with 6 MB of L3 ache and has 45W TDP (35W cTDP). The low power version of this processor, the Core i5-6442EQ has same specifications but comes with a 25W TDP and tones down the clock speeds to 1.9 GHz base and 2.7 GHz boost. There are also two Core i3 variants that include the Core i3-6100E with 2 cores and 4 threads, the clock speed is maintained at 2.7 GHz with out any turbo boost frequency and features 3 MB of L3 cache. This chip operates at 35W TDP. The low power version of this chip is the Core i3-6102E with same specifications except a lower speed of 1.9 GHz and just 25W TDP. Do note that all Core series chips (Core i7/Core i5/Core i3) feature the same GT2 iGPU found on the Skylake desktop processors with 24 EUs but variable clock speeds.

Finally, we have the Celeron models that feature to models whose names are yet to be determined but Intel did list down the specs for them. The 35W model comes with 2 cores and 2 threads, featuring 2 MB of L3 cache and GT1 graphics (8-16 EUs) while the low power version of this chip will stick to a 25W TDP and come with lower clock speeds.

Now we did detail the Skylake-U series lineup a few days ago but surprisingly, we have found two more chips that will be included in this lineup. The first chip whose name is "TBD", comes in a dual core, multi threaded package that features clock speeds of 2.4 GHz (base), 3.4 GHz (boost) and has 4 MB of L3 cache. The second model with similar specs has different clock speeds of 2.0 GHz base and 3.1 GHz boost. Both of these models have two things in common, they feature the GT3e class iGPU and 15W TDP. The rest of the lineup details can be found below: 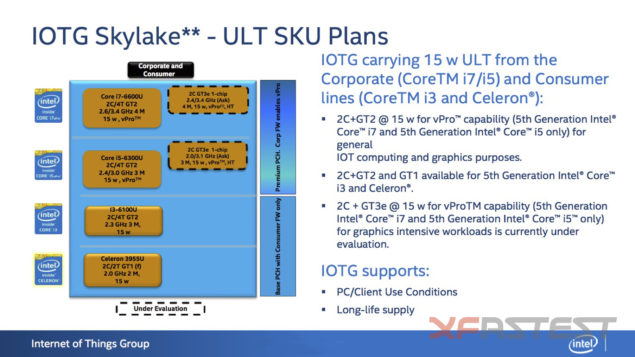 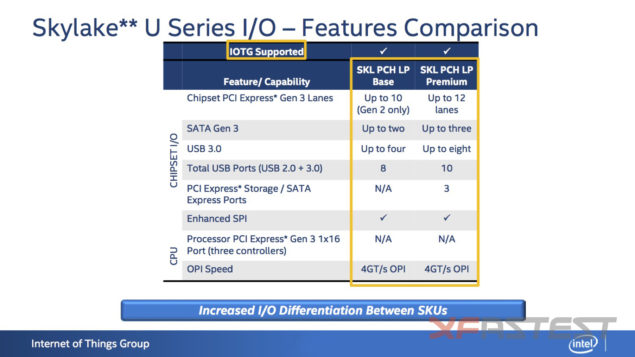 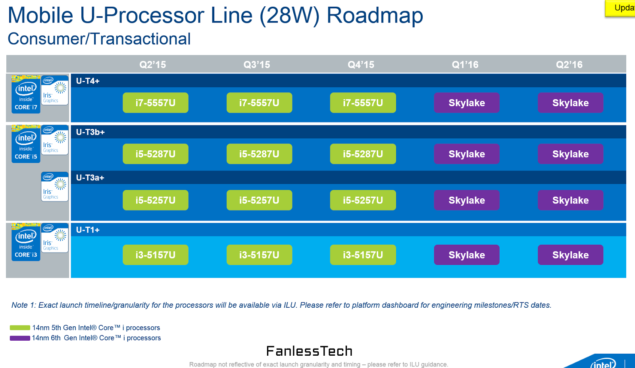 Lastly, we should expect a total of four Skylake-U chips with TDPs of 28W arriving in Q1 2016. These chips will replace the Broadwell-U family and feature Iris Graphics chip which have better performance compared to the traditional Intel HD graphics chips found on the rest of the Skylake-U lineup. The specifications of the Skylake-U family can be found below: