Yesterday, it was announced that Intel has silently launched their Skylake Xeon processors and Lenovo came up with the announcement of their latest P50 and P70 workstation devices that featured the new processors. Intel launched their Skylake processors on 5th August so the announcement of the Skylake Xeon mobility processors came as a surprise. The latest Lenovo notebooks will not only incorporate the new Xeon processors but feature the latest NVIDIA mobility based Quadro solution too. 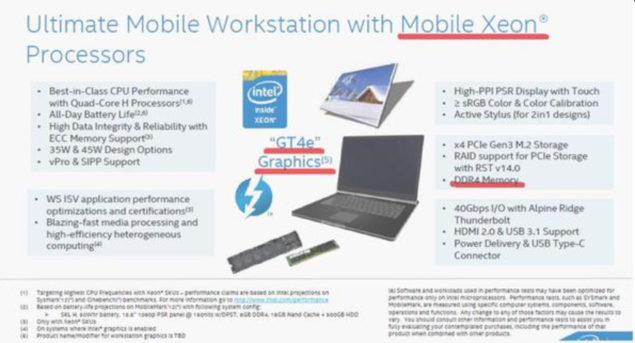 The launch of the new Lenovo workstation products come with three new announcements in the note book market. First off all, Skylake is readily available in the form of Xeon E3-1500 V5 processors on the Intel mobility based products. In their official blog post, Intel didn't gave out any specific details for the Skylake Xeon lineup but they will be part of the Xeon E3-1500 V5 lineup which will be available in a ton of various SKUs. All Skylake Xeon processors will feature vPro and support the latest Thunderbolt 3 standard with Type-C ports. Not long ago, a slide leaked out detailing these mobile workstation parts with Xeon chips. The details mentioned Quad core processors (H-Series) with all day battery life, DDR4 ECC memory support and SKUs ranging in 35-45W TDP options.

Additional details mention that some SKUs will even feature GT4e graphics option that come fused with eDRAM. Storage options include x4 PCI-e Gen3 M.2 storage, RAID support for PCI-e storage (RST v1.4.0) and 40 GB/s I/O with the new Alpine Ridge Thunderbolt controller. We know that most of these details are true for mobility Skylake Xeon processors but we will still wait for official details on Skylake CPUs that come in the days ahead.

The two models from Lenovo that feature these new Skylake Xeon chips include the Lenovo P70 (a 17.3 inch) model and the Lenovo P50 (a 15.6 inch) model. We cannot tell what Skylake Xeon-M SKUs have been housed within these notebooks but we just did tell you some of the specifications to expect from the new Skylake processors plus the nominal 10-15% IPC increase that we saw on the desktop parts that launched last week. We do know that both models will feature a Quad Core Xeon E3-1500M chip with 47W TDP. The new Skylake processors allow support for DDR4 memory across mainstream platforms and we are looking at no less than 64 GB of DDR4 memory (ECC) clocked at 2133 MHz on these workstation devices. Storage includes up to 1 TB of PCI-Express based SSD (NVMe) and up to 2 TB of traditional HDD storage which makes up for a lot of room. The IPS display panels on both notebooks come with 1920x1080 resolutions with optional touch interface but are also available in 4K IPS options which is a killer deal when you get to know the graphics chip these notebook house.

Today, NVIDIA launched their latest Quadro M5000 and Quadro M4000 graphics cards. Little do we know that NVIDIA also has a full Maxwell mobility lineup geared for launch very soon. In fact, the Quadro chips housed inside Lenovo's latest notebooks are in fact based on the Maxwell architecture. The flagship of the lineup will be the Quadro M5000M and the lineup goes all the way to the entry level Quadro M1000M. The Quadro M5000M has specifications similar to the GeForce GTX 980M with 1536 CUDA cores, 96 TMUs and 64 ROPs. The core is clocked at 962 MHz (base) and 1051 MHz (boost) while the 8 GB GDDR5 VRAM is clocked at 1253 MHz or 5.00 GHz that pumps out 160.4 GB/s bandwidth while running across a 256-bit bus interface. We should expect to see these models arrive in mobility devices relatively soon. Some of the GPU performance numbers along with GPU-Z shot can be seen below (Courtesy of our Disqus member Ole Fra Trondheim via Cloudfire at NotebookReview Forums) 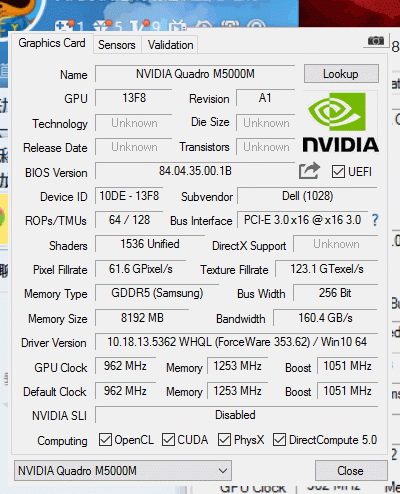