[Editorial] A few days ago Intel revealed its plans to introduce a Xeon with an FPGA onboard and on the same LGA 2011 socket too. That is very big news. This is the beautiful unification of an x86 chip with a reprogrammable integrated circuit that could set a precedent that completely changes certain industries. Our sources indicate that this Xeon chip will be of the E5 series (or get a completely new nomenclature) so this is targeted towards the server market (not that you can deter the determined enthusiast) but could be the first step of a much larger evolution. 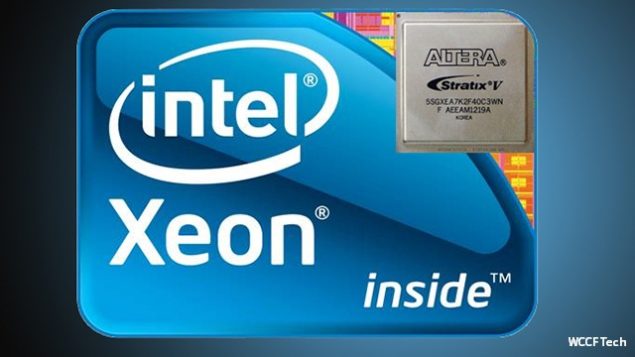 Not an official image. Also we are not aware which FPGA maker will be used.

I am sure most of you will know what an FPGA is, but for the sake of covering my bases allow me to get into a short intro. And FPGA or a field programmable gate array is an integrated circuit that can be reprogrammed after it is manufactured. Unlike a traditional CPU whose programming is locked in stone (it might appear as if your CPU can do everything but it is actually limited by the hard coded instructions inside) an FPGA can be reprogrammed for any specific task. Now here is the thing, ASICs and FPGAs are lightning fast. They are so good at what they do (because their programming is application specific) that they usually leave commercial x86 processors in the dust. The fastest is of course the ASIC but just like your average CPU its programming is set in stone. The FPGA is something of a middle way and a really efficient one at that. So Intel will be combining this reprogrammable chip into its hybrid Intel Xeon E5 processors.

Now don't let the headline fool you, the 'upto' in that 20x performance boost is there for a reason. For one thing the 2000% performance is limited only to code executed on the FPGA, not the Xeon Chip and secondly this boost can range anywhere from 1x (nothing at all) to 20x (a lot) or even more depending on the exact algorithm that you are running and its optimization on x86. There is a very real possibility that you will find an algorithm that actually fares much worse on the FPGA then the Xeon core, but the chance of that is quite low. Take Bitcoin for example, an ASIC will be orders of magnitude ahead of a high end Radeon, an FPGA will be multiple times ahead but a consumer CPU will fare much much worse (because its programming is not suited to GPGPU/Parallel applications). Here is what Intel had to say:

Ofcourse the fact remains that the actual catch here is that you have to manually program the FPGA for any task you are doing. That programming is what separates real life from fantasy. What I want to know is how much of a price bump this Hybrid Xeon - FPGA lineup be getting. I am sold if they actually chalk it up to contra revenue but I doubt that will be the case. The applications for this are endless and impressive. Render workstations that have the ray tracing code running on the FPGA alongside a FirePro or Quadro; A server centre whose processors handle all the general tasks while the FPGAs handle all the database and data dumping and analysis tasks. The potential is there, of that there is no doubt. Price will be an absolutely critical factor here and I cant wait to see how this pans out.

By Syed Muhammad Usman Pirzada. We cater to your constant need to remain up to date on today's technology. Like us, tweet to us or +1 us, to keep up with our round the clock updates, reviews, guides and more.

#Intel Xeons with FPGAs on board :O This, should be interesting. http://t.co/3TDjbdeGjB