Intel's Pentium Anniversary Edition is coming soon, very soon and it will be supported on both Intel 8 and 9 Series chipsets. Intel had previously hinted and stated on more than one occasion that the Pentium Anniversary Edition will infact support both 8 and 9 series motherboards but there was no official confirmation given. We have just received the confirmation. And thats not it, pricing statements reveal that Intel will point this possible behemoth straight into AMD territory. 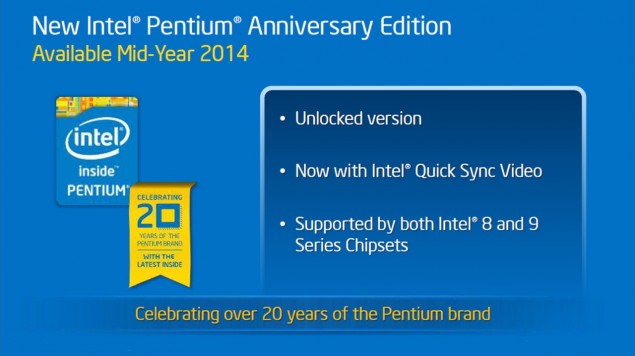 The Pentium Anniversary is basically a new iteration of Pentium Processor, this time with an unlocked multiplier and thus the suffix 'k'. Not only that but sources inside Intel, who did not want to be named, have told our colleagues over at Sweclockers.com that the Intel Pentium Anniversary Edition is targeted directly at AMD's Price/Performance territory. The spokesperson said that the price/power/oc ratios are so well that it could just might (a very big one at that) kill most of AMD CPU Sales in that bracket.

"Pentium Anniversary Edition is about all an enthusiast on budget could want. Low price, good power, good overclocking margin ........ maybe an AMD killer."

So basically, their logic appears obvious. If you are willing to crank up the frequecncy you will get incredible value for money, but just how much of the low-early mid end pc users (HTPC, Casual Gaming Rigs, Work Computers) would be willing to mess with the multiplier? That is something i have difficulty understanding. Moving on to the actual business. The Pentium Anniversary Unlocked Processors will be based on the 22nm Haswell Refresh Architecture and will fit snugly in the LGA 115X socket. Exact specifications are not known but you can expect these right alongside the Devil's Canyon Release on the 2nd of June. The simultaneous release alongside Devils Canyon might (might!) hint at the fact that it will have Devil's Canyon's improved TIM.

#Intel Pentium Anniversary 'K' Processors will be supported on both 8 and 9 Series and are targeted at #AMD. http://t.co/ri60o8qdng