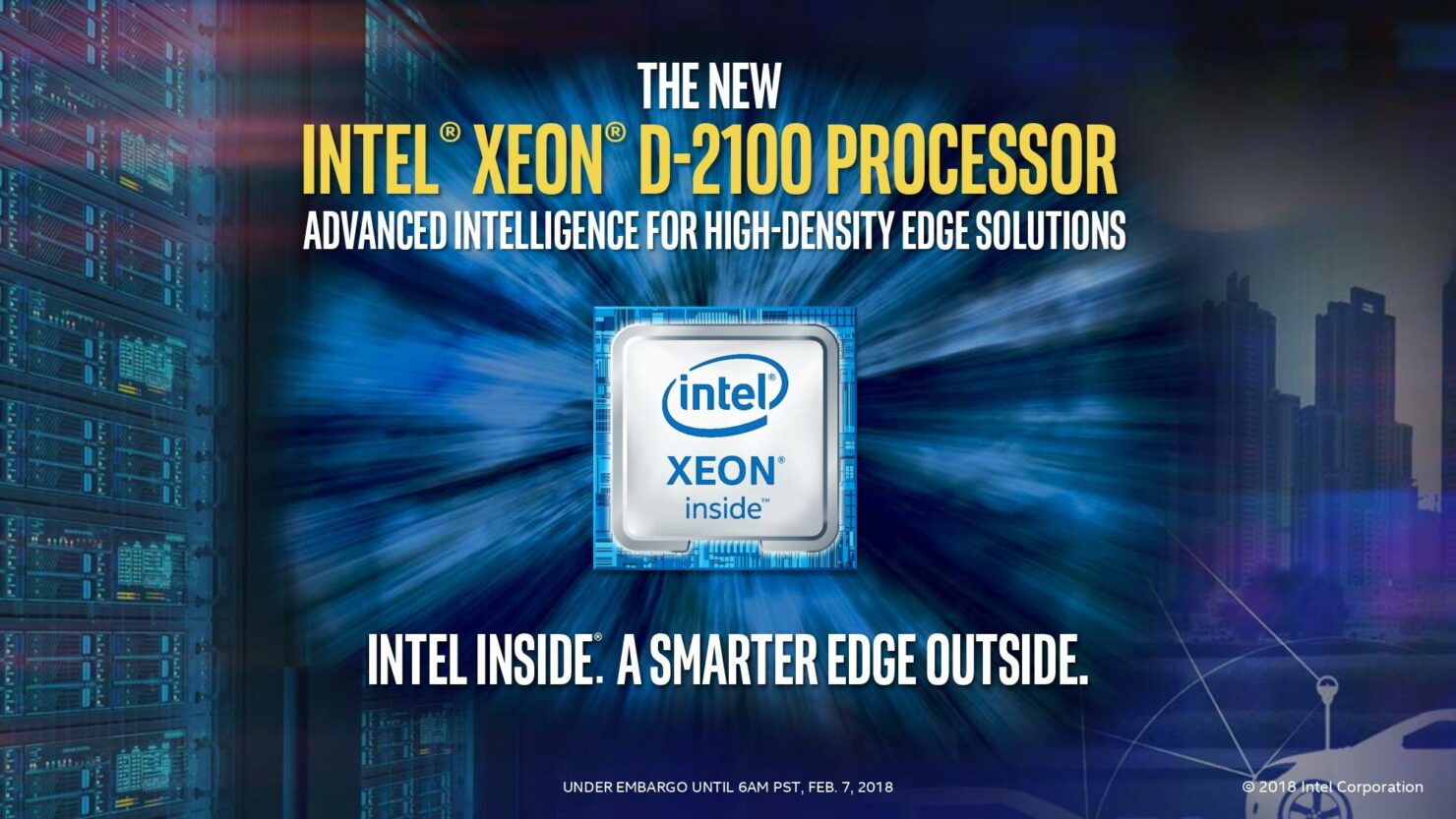 Intel launched its brand new lineup of Intel Xeon D-2100 processors which are the successor to the older 1000-D series lineup that was rolled out last year. Intel announced the Xeon D platform almost three years back in September ’15 and it consists of high powered SoCs based on the 14nm architecture. We have seen Intel diversifying its lineups in the past with the introduction of Core M and now we see the same thing with Xeon D, which is basically merging the high powered Xeon processors with the low power requirements of Atom SOCs.

Let’s talk a bit about the interesting buzz words, specifically ‘Big’ cores. Even though the Xeon D platform consists of SoCs, they are not low performance, rather only low power. The cores are based on the Skylake architecture and will support VT-X/VT-d virtualization, RAS features and the entire TXT, AVX-512, TSX Instruction set. The chipset logic however will be incorporated on system and will make for a more efficient footprint than the customary two chip solution where the chipset logic lies on the motherboard. Since this is an SOC platform, the PCH is integrated.

The new Skylake based 14nm Xeon-D processors support up to 18 cores and 36 threads. This core count might seem low in a server environment but this isn’t actually the case considering these are SoCs (System-on-Chip) with BGA packaging and represent one of the highest density solutions around. The platform supports up to 512 GB DDR4-2666 (ECC) on four memory channels. L3 cache is 1.375 MB per core for a total of 24.75 MB on the 18-core SKU.

Intel AVX-512 is also present with up to 1 FMA support. Turbo Boost 2.0 is present and can boost a single core up to 3.0 GHz or all cores up to 2.2 GHz. The die is based on the Intel Mesh architecture and should be fairly similar to the mainstream i9-7980XE. The CPU supports up to 32 PCI Express 3.0 lanes and up to 20 Flexible High Speed I/O. TDP is apparently configurable in the range of 60-100 Watts. The platform has up to 14 lanes of SATA 3.0 and 4 ports of USB 3.0. It also features Intel Management Engine 11.11.

The SKU configurations are one of the more interesting affairs I have seen. The 18-core is only available in the 2.2 GHz (all-core) configuration which puts it at a lower theoretical peak compute rating than the much higher clocked 16-core variants. Then again, the 18-core has been designed specifically for Edge Server and Cloud use cases in mind and therefore doesn’t require a high clock count anyway. The SKUs have been divided into 3 categories: 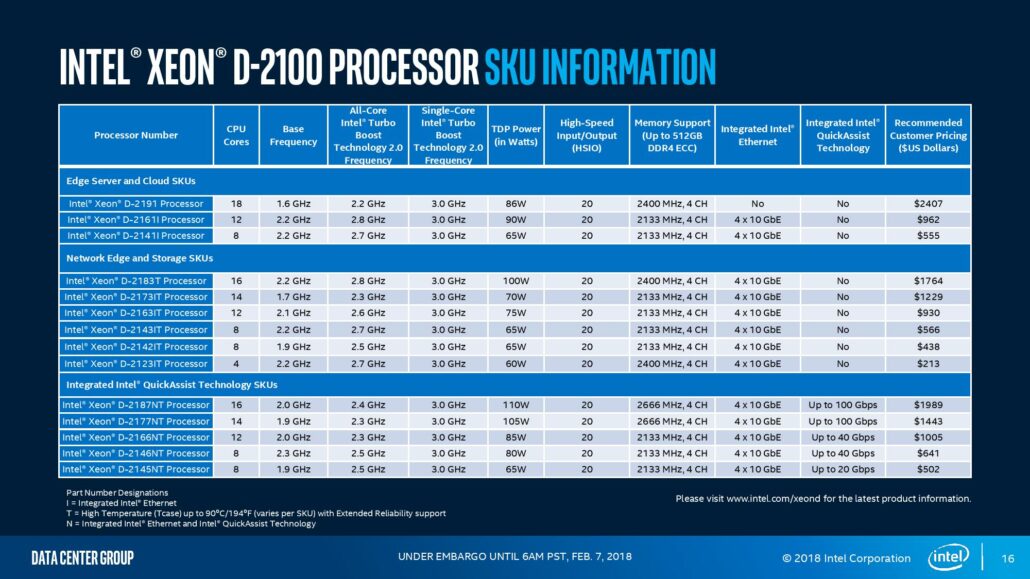 Finally we have the last lineup, which appears to be targeting a niche category and have a slightly higher TDP then their predecessors. The reason for this is they include the Integrated Intel Quick Assist Technology which supports up to 100 Gbps of throughput. This feature is not present in any of the other classes. A total of 5 processors are present in this lineup: The Intel Xeon D-2187NT, D-2177NT, D-2166NT, D-2146NT and the D-2145NT. These are 16, 14, 12, 8 and 8 cores respectively. The all-core turbos range from 2.4 GHz to 2.5 GHz. Pricing ranges from $1989 for the highest end part to $502 for the lowest end.

The turbo frequencies based on load and type are given below: