The Xeon D platform was announced back in September 2014 and consists of high powered SoCs based on the 14nm Broadwell architecture. We have previously covered the Intel Xeon-D and Pentium-D lineup which consisted of 8 SKUs. This lineup has now been updated (according to a report via the reliable CPU-World) to include SKUs which have 12 and 16 cores and upto 18 and 24MB of cache. This is pretty impressive considering we are talking about actual 'big cores' on an SOC based platform. 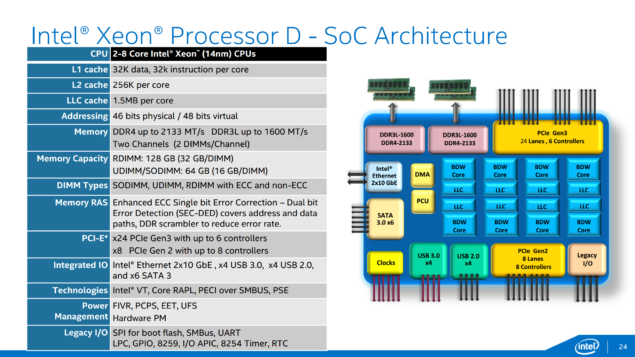 Intel announced the Xeon D platform almost a year back in September and it consists of high powered SoCs based on the 14nm broadwell architecture. Infact, the platform was previously called Broadwell DE. We have seen Intel diversifying its lineups in the past with the introduction of Core M and now we see the same thing with Xeon D, which is basically merging the high powered Xeon processors with the low power requirements of Atom SOCs.

The top end of the Xeon-D lineup now includes the Xeon D-1577, Xeon D-1567 and Xeon D-1557. The D-1577 variant has been confirmed to feature 16 cores whileas the D-1577 variant will have 12 cores. Intel has basically managed to double the number of cores from their original lineup, which will have positive impacts on the mobility side of things and probably alot of design wins. The Pentium-D series has also received some update but once again some information is missing.

Let's talk a bit about the interesting buzz words, specifically ‘Big’ cores. I think what the marketing team at their HQ is trying to portray is the fact that even though the Xeon D platform consists of SoCs, they are not low performance, rather only low power. The cores are based on Broadwell Architecture and will support VT-X/VT-d virtualization, RAS features and the entire TXT, AVX2, TSX Instruction set (hopefully with the bug fixed).

The chipset logic however will be incorporated on system and will make for a more efficient foot print than the customary two chip solution where the chipset logic lies on the motherboard. These chips will have most of the stuff Broadwell has and support upto 128 GB of DDR3L or DDR4 memory. Sine this is an SOC platform, the PCH is integrated. PCI-e 2.0 and 3.0 as well as SATA 3.0 and USB/Ethernet controllers will also be integrated. The Xeon-D platform will be significantly faster than the Atom Rangeley lineup and is expected to land this quarter.