Intel has launched their fastest chip for the microserver market under the Xeon D family. The chip known as the Xeon D-1571 comes with the highest core count available on the micorserver platform and based on Intel's Broadwell architecture which uses the 14nm FinFET technology. The Xeon D family consists of several SOCs which are aimed at the microserver and storage markets, delivering the Xeon level architecture in a low TDP package. 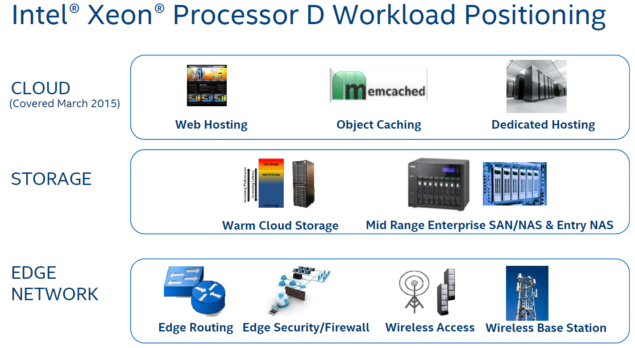 CPUWorld was first to report the launch of the new Xeon D-1571 processor and from the looks of it, the latest entrant to the lineup is also the highest core count processor aimed at microservers. The Xeon D-1571 has 16 Broadwell cores which are the same high-end variants that will be used on the Xeon E5 V4 "Broadwell-EP" line up which is coming soon in Q1 2016. The specifications include a 14nm process which allows the chip to clock in at a speed of 1.3 GHz, 24 MB of LLC (L3 Cache) and a TDP of just 45W. The chip has the same TDP of its 8 core sibling, the Xeon D-1541 but trades off 35% of its clock speed to incorporate 8 additional Broadwell cores. Since this is an Intel part, the chip also features hyper threading 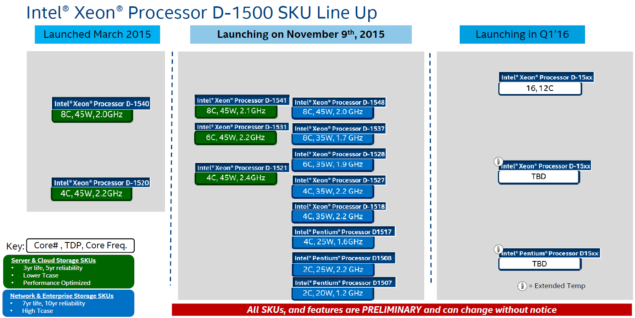 Since the Xeon D processors feature the same architecture level and hierarchy of the enterprise level Xeon chips, we are looking at the same Broadwell architecture which supports features such as VT-X/VT-d virtualization, RAS features and the entire TXT, AVX2, TSX Instruction set and since this is also a SOC (System on Chip) design the chipset logic will be incorporated on system and will make for a more efficient foot print than the customary two chip solution where the chipset logic lies on the motherboard.

Additional features will include support for either dual-channel DDR4 memory (2133 MHz) or DDR3L ram (1600 MHz). The system can incorporate up to 2 DIMMs per channel with the total capacity support up to 128 GB (RDIMM) or 64 GB (UDIMM/SODIMM) in ECC or non-ECC types. For expansion, the SOCs feature a total of 24 PCI-e Gen 3.0 lanes and 8 PCI-e Gen 2.0 lanes. Integrated I/O is offered in the form of dual 10 Gigabit Ethernet LAN ports, 4 USB 3.0, 4 USB 2.0 ports and 6 SATA 3 ports. Expect more information about the faster clocked variant in the coming weeks.