Last week, Intel launched their latest 16 core, Broadwell based Xeon D processors which includes the flagship Xeon D-1587 chip. The Xeon D family consists of several SOCs which are aimed at the microserver and storage markets, delivering the Xeon level architecture in a low TDP package. Several chips have launched under the Xeon D brand and Serverthehome has put the flagships to test in a range of benchmarks.

The specifications include a 14nm process which allows the chip to clock in at a speed of 1.3 GHz, 24 MB of LLC (L3 Cache) and a TDP of just 45W. The chip has the same TDP of its 8 core sibling, the Xeon D-1541 but trades off 35% of its clock speed to incorporate 8 additional Broadwell cores. Since this is an Intel part, the chip also features hyper threading. 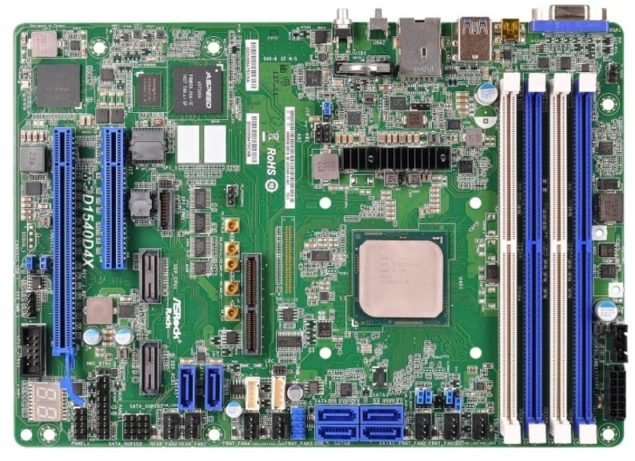 All of the chips are available in BGA package so you will have to purchase the platform directly from Intel's AIB partners such as SuperMicro or Gigabyte where they are expected to hit retail soon. The Xeon D-1571 is priced at $1222 US so expect more hefty prices for the Xeon D-1587 and the Xeon D-1577.

Since the Xeon D processors feature the same architecture level and hierarchy of the enterprise level Xeon chips, we are looking at the same Broadwell architecture which supports features such as VT-X/VT-d virtualization, RAS features and the entire TXT, AVX2, TSX Instruction set and since this is also a SOC (System on Chip) design the chipset logic will be incorporated on system and will make for a more efficient foot print than the customary two chip solution where the chipset logic lies on the motherboard.

Additional features will include support for either dual-channel DDR4 memory (2133 MHz) or DDR3L ram (1600 MHz). The system can incorporate up to 2 DIMMs per channel with the total capacity support up to 128 GB (RDIMM) or 64 GB (UDIMM/SODIMM) in ECC or non-ECC types. For expansion, the SOCs feature a total of 24 PCI-e Gen 3.0 lanes and 8 PCI-e Gen 2.0 lanes. Integrated I/O is offered in the form of dual 10 Gigabit Ethernet LAN ports, 4 USB 3.0, 4 USB 2.0 ports and 6 SATA 3 ports. Expect more information about the faster clocked variant in the coming weeks.

The benchmarks published by Serverthehome show the performance of the 16 core Xeon D-1587 chip which is embedded on a Supermicro X10SDV-7TP8F motherboard. The platform includes 64 GB of DDR4 memory with a clock speed of 2133 MHz along with a 400 GB Intel DC S3700 drive. The system was compared to several other Xeon based chips including a dual Intel Xeon E5-2620 V3 system. In all of the tests, the Xeon D-1587 outpaced the rest of the systems thanks to its higher core count and intense multi-threaded performance. This puts the chip in comparison to a Xeon E5 V4 processor which is why the processor is priced high. Serverthehome itself calls the chip as a "low-end SOC revolution". The Xeon D platform offers a mean punch against the similar low-power, high core-count SOCs that are based on the ARM architecture such as the Opteron A1100 which were released by AMD this month.