The upcoming Intel DZ87KLT-75K "Kinsley Thunderbolt" flagship motherboard was spotted at the company's IDF conference held in Bejing, China (via VR-Zone Chinese). Intel is working on a wide range of Lynx Point 8-Series chipset based LGA 1150 socket motherboards which you can see here, also to note that these would be the last motherboard offering by Intel themselves.

One thing to be noted that all boards would be based on the new C2 stepping since the C1 stepping developed some USB 3.0 issues. Storage would include a total of 8 SATA 6 Gbps ports while I/O includes 8 USB 2.0 ports and 8 USB 3.0 ports along with the addition of Thunderbolt interface, 2 x 2 Internal/External Hi current ports, a 10 channel (8+2) Intel High definition audio jack, 2 Intel Gigabit Dual Lan ports, SPDIF headers and more. The PCH offers Intel Smart Response technology, RST with Raid 0,1,5,10 support and CPU/iGPU performance tuning.

Additional features include the Intel Visual BIOS, Lucid Trivialization software, Back-To-BIOS switch, Power On/Off switches, Debug LED, Bluetooth plus WiFi modules and 100% solid state capacitors to ensure longer lasting stability. It should be noted that Intel showcased the motherboard which was running an Haswell processor along with their RTS2011LC cooler. The RTS2011LC was built specifically for the X79 HEDT-Platform so the Intel DZ87KLT-75K "Kinsley Thunderbolt" Motherboard uses a new bracket which would possibly be delivered with Haswell CPUs.

VR-Zone also got slides detailing other 8-Series chipsets which include the following: 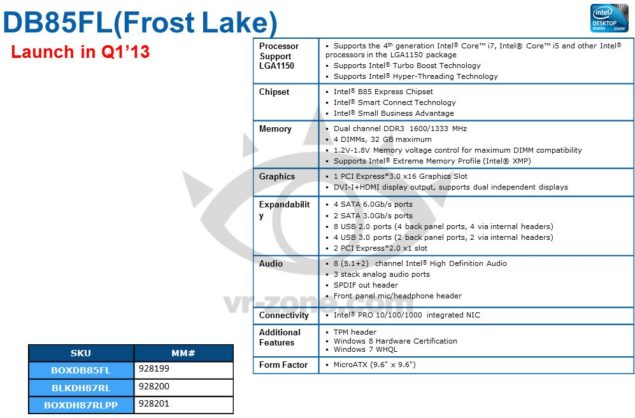