The first benchmarks of Intel's Devil's Canyon Unlocked Processors have been surfacing all over the Internet and no doubt you would be wondering what the verdict is. Well as you will be aware, Devil's canyon is basically a refresh albeit in a much cooler physical package. Keeping that in mind, we can reasonably expect a performance increase in only two aspects. Cooling and Overclocking Overhead, the latter of which is indirectly related to the first anyways.

We selected the benchmarks from SemiAccurate.com. The reason being that they provided a comprehensive side by side performance comparison of Haswell Refresh (Devil's Canyon) and Haswell SKUs. Their test rig had the following specs; they used a Biostar Hi-Fi  Z97WE Motherboard coupled with a AMD DDR3 1866Mhz Ram. Now sadly they failed to mention the exact amount of Ram used but since the same test rig was used for all SKUs, it doesn't matter. Any bottlenecks, if present, carry over and 'percentage performance difference' is not affected. Also this benchmark only includes the i7-4790K. So without any fruther ado (so I really like this line, sue me) here are the benchmarks: 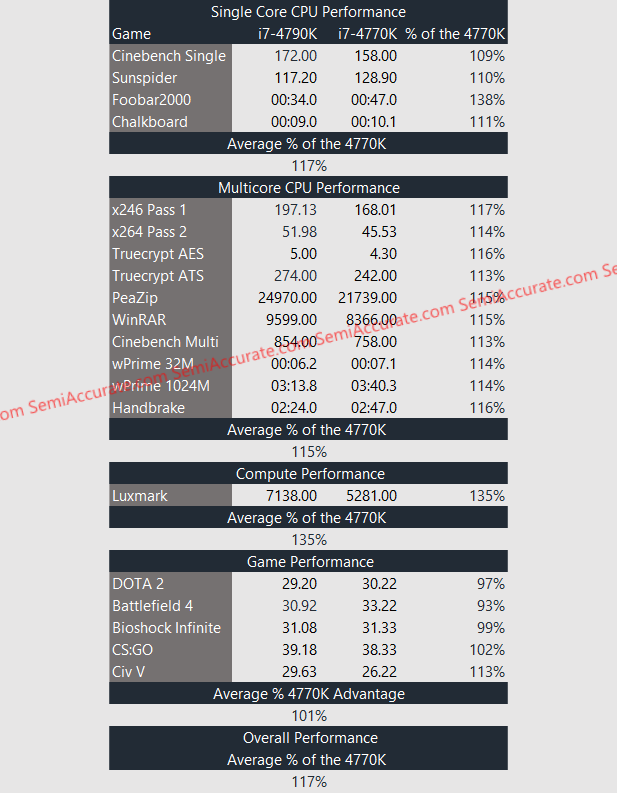 Now do realize that these processors are on stock clocks i.e the Core i7-4790k is running on 4.4 Ghz (Turbo freq.). Basically the performance bump you see is actually courtesy of the 500mhz of factory overclock the Devil's Canyon SKUs ship with. The actual interesting thing this benchmark does not measure is the operating temperature which aggregating multiple sources is about 75c compared to the much much higher temperature of i7-4770k under load (93c). We saw an absolutely massive performance increase on the compute score (around 35%) which is slightly higher than the median increase, and a completely negligible increase in gaming (~1%) which isn't really surprising. Now the average multicore performance increased by about 15% while the single core performance increased by about 17%. But I am sure you will be saying, 'but these are just stock clocks' and the 'k' series processor is designed to be over clocked. Well the answer to this question actually deserves an entirely separate editorial, which I am working on even as I finish this post. So there you have it folks, benches of the Devil's Canyon i7 4790K SKU.