In a triumphant moment, Intel has published a record year and a great quarter with revenue of $16.4 billion, net income of $3.6 billion and an EPS of 73 cents per share. Non-GAAP net income was $3.9 Billion with an EPS of 79 cents - which was easily more than analysts expectations. The company paid $1.2 billion worth of dividends and used $533 million to repurchase 15 million shares of stock. Intel (NASDAQ:INTC) were trading at $37.98 a share at the time of writing, up from $35.54 a pop last quarter, showing capital gains of 6.8%.

Analysts expected Intel to post earnings of 74 cents a share and 15.752 billion in revenue (on a Non-GAAP basis), according to a consensus estimate from Thomson Reuters. Intel had an absolutely great year, with full-year revenue clocking in at $59.4 billion, on a net income of $10.3 billion and an EPS of $2.12 (GAAP basis). The Santa Clara chip-maker paid dividends of $4.9 billion this year and used $2.6 billion to purchase 81 million shares of stock.

The company's non-volatile memory solution group has seen very impressive growth and is something worth mentioning here. Optane memory will be landing this year as well so you can expect this trend to continue at a blazing fast pace. To those who do not know, Intel introduced a brand new tier of memory (that lies somewhere between an SSD and RAM) that is not volatile and will be available to consumers this year. An honorable mention goes out to the IoT group which saw a revenue increase of 16% year over year.

Our Take On Intel: A Record Year and Advisory For Status Quo Disruption in Q2 2017

Disclaimer: I own no stock in Intel and/or competing companies and have no plans to do so for the foreseeable future. The analysis and forecasts given here are provided "as is".

Intel (NASDAQ:INTC) stock was facing some guarded sentiment in the weeks before the earnings due to the constant stream of leaks and news about AMD Ryzen and the ever shrinking (read: red shifting) PC market. In what appears to be a sharp contrast to that statement, Intel has managed to not only post a record year but beat analysts estimates for its quarterly results. In the wake of this development, Intel stock received a well-deserved bump up to $38 price levels. Not only that but the company's Q1 2017 guidance is just as rosy, with everything spick and span.

This might be the calm before the storm, however, because while the company's performance was stellar (as usual) and while we expect it to meet its Q1 2017 guidance easily, it is going to be facing significant status quo disruption starting Q2 2017. AMD Ryzen will be releasing between the 27th February-3rd March time frame according to a slip-up by the company and will offer competitive performance to Intel's compute side. The significance of this should be readily apparent because Intel has been living in a virtual monopoly for the past few years due to AMD counterparts being completely outclassed in terms of performance; this dominance is likely to soon come to a close.

We have seen third party benchmarks of AMD Ryzen engineering samples which went toe to toe with Intel's $1000 8-core CPU - and this is a chip that is expected to be priced around the $550 mark or under. The Ryzen 4-cores would proportionally be able to offer similar competitive performance to Intel solutions. We can say with complete certainty that Intel's CPU market share for the mainstream (DIY) PC Market is going to decline in the quarter after Q1 2017 as Ryzen adoption kicks in.

Intel can respond to this in just two ways:

The second route would be a very risky move for multiple reasons. Firstly, the price/performance factor of Ryzen would be a very attractive deal for any PC enthusiast. Secondly, the AMD offering has lower attached-implicit-costs as well.

See, Intel (NASDAQ:INTC)'s  6-core and 8-cores require the HEDT platform, which is based on a different socket than the one the mainstream platform is based on. AMD's platform, on the other hand is unified on AM4, which means lower potential upgrade costs and just better all-rounded compatibility. So someone upgrading from an Intel 4-core will have to pay the premium for the CPU first, followed by the premium for the motherboard as well. The AMD route, on the other hand, will offer much better value.

By our estimates, Intel will be able to keep the lead clock for clock so a 4-core Intel processor should be faster than an AMD one. However, if AMD prices it right, a 6-core Ryzen should not only offer better overall performance but a competitive price point as well! In either case, it is my belief that Intel will have to start slashing prices for its mainstream processors by reducing the premium it charges its customers. This will eat into its margins which should remain constant for Q1 2017 but will probably decline going foward in Q2 2017.

Intel has also mentioned that it plans to battle the declining overarching PC market by diversifying into other industries. One of these that the CEO mentioned was the self-driving vehicle market. Intel missed the boat on the mobile side of things, and it looks like it doesn't want to make the same mistake for the self-driving market. Interestingly, however, it doesn't appear to be interested in dealing with the one company that is by virtually all regards the future leader of automobile tech: NVIDIA. It is instead, relying on the old model of self-driving with companies like Mobileye - a standard which can not achieve fully autonomous driving in real conditions.

The purpose of this advisory was to inform any investors of a very big status quo change that is looming just outside of the Q1 2017 outlook scope. This is something that could easily affect the company's stock price and is something worth keeping in mind.

All that said, it is not doom and gloom for Intel. Far from it. The company remains a blue chip stock with exceptional fundamentals, a bloody brilliant R&D track record (silicon is reaching the end of its line, and if any company can find an alternative for computing, it's Intel), and a good dividend to boot - and none of this will change anytime soon. So if you are an investor that follows the Warren Buffet approach to investing, it's not something worth worrying about. There hasn't been any change in fundamentals but the company will definitely need to get out of its comfort zone once Ryzen arrives. Besides, if Intel plays its cards right, profits from Optane could negate any potential downside on the compute side of things.

The non-GAAP tax rate excludes the impacts of the planned Intel Security Group divestiture. Both GAAP and non-GAAP tax rates increased primarily due to one-time items included in 2016 and higher income in higher tax jurisdictions. Intel Corporation expects a GAAP EPS of $2.53 for 2017, plus or minus 5%. Non-GAAP EPS for 2017 is expected to be $2.80, plus or minus 5%. Capital spending for 2017 is expected to be $12.0B plus or minus $500M, up $2.4B, from 2016, primarily driven by Non-Volatile Memory Solutions Group.

Although there are small concerns for investors with Ryzen on the way, chances are reasonable that in the short to medium term at least, the effect on Intel's financial position will be negligible. As a blue chip and steady dividend payer, Intel is likely to be a mainstay of institutional investors portfolios for a long time yet (barring a huge change in the landscape). Position turnover of the top 10 investors in Intel is low with all of them increasing holdings except one (Bank of America Merrill Lynch) as of the last reporting. 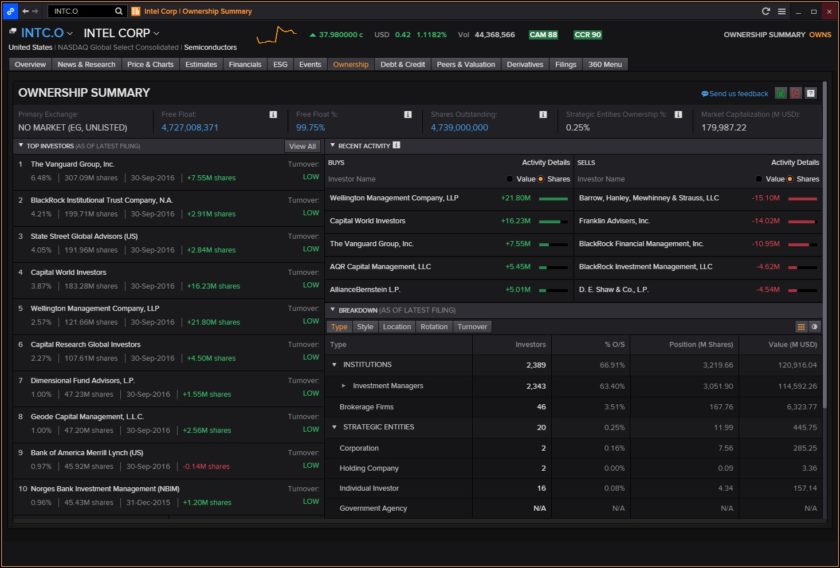 Institutional investors of course, while a significant part of the market are still only part of it. Smaller investors who have been on the gravy train in recent years may start eyeballing positions with a view to taking some profits. This may have some impact on the stock price but in the midst of recent market volatility following the US election and other factors, by itself is unlikely to exert huge downward pressure on its own.