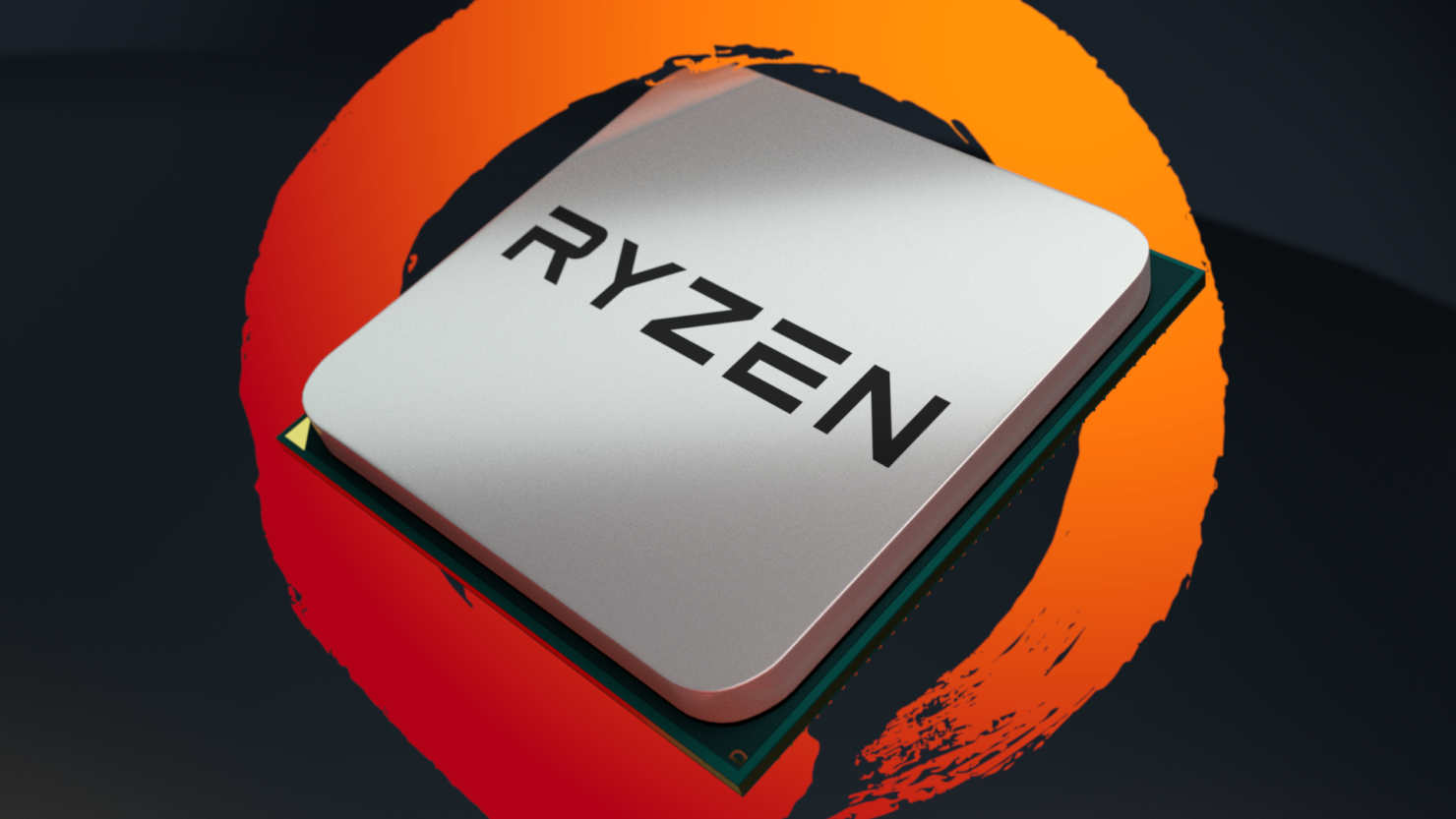 What is probably one of the biggest leaks of this year has just occurred. A review that was apparently published (in paper form) before the NDA lifted has leaked out from a trusted French PC hardware guru and reveals real-world performance testing of the Zen based Ryzen processor. The clocks of the Ryzen CPU used in this testing are the same as all the leaks we have seen so far, namely an all core turbo of 3.3 GHz (with a base clock of 3.15 GHz) although Lisa Su has stated in the New Horizons event that the final clocks will be 3.4 GHz+.

CPCHardware, short for Canard PC Hardware is a well-known PC magazine from France that has been in print since 2001. The review in question was conducted by the hardware guru Doc Teraboule, and gives a basic summary of the Ryzen processor. Before we begin, I would like to mention that the identifying code of the processor is AMD 2D3151A2M88E and the chip is not mentioned by its new marketing name. The following clock speed information is given about the CPU used for testing:

This shows that the review was probably conducted before the Ryzen event and the chip used is an engineering sample sent out to the press to test under NDA. Lisa Su has however, previously stated that the base clock of the final chip will be 3.4 GHz. I have talked a little about the impact of the reduced clock speed below, but otherwise, these benchmarks are a perfect reference point of Ryzen performance numbers. AMD usually makes sure that any outdated engineering samples are replaced before the reviews go live. Without any further ado, let's dig into the review:

The first portion of the aggregate benchmarks focuses on rendering programs, which can fully utilize the compute of a processor.

In the first portion of the aggregate benchmarks, we get to look at mostly render programs. The reason for this is simple, a rendering program is usually fairly well optimized to take advantage of not only every thread available to the program but also utilize all the resources of the processor effectively. In essence, render engines are able to squeeze every last drop of performance that you can hope to get in real-world applications. The following programs were tested:

The AMD Ryzen CPU here performs remarkably well. In fact, it is able to beat the six-core HEDT Intel Core i7-6800K, which has a price tag of $434. It falls short of the Core i7-6900K by a significant margin but this isn't something that is in any way less impressive - considering the 6900K has an MSRP well over the $1000 mark. Remarkably, the AMD Ryzen processor features an aggregate improvement of a full 60% over the FX-8370 which is the last generation of AMD's 8-core lineup.

AMD Ryzen Gaming (Unoptimized) Benchmarks - Up to 32% Improvement over the FX-8370, comparable performance to the Core i5-6500

Next up, we have the gaming benchmarks and these might be more relevant for some of our audience. The problem with having an insanely powerful, multi-core processor is that usually, these guys are clocked at a relatively modest rate and unlike render engines, game engines are not designed to take full advantage of all available threads. Instead, the processor with the highest clock rate usually wins the 'game', so to speak. In actuality, we have seen that the first thread is the most utilized, with the second being utilized significantly less and so on with an exponentially decreasing weight assigned to every additional thread. The following games were tested and performance aggregated:

It is here that the modestly clocked AMD Ryzen falls behind its Intel counterparts and the Core i7-6700K which has a very high turbo clock, so reigns supreme. This is of course, something to be expected since even Intel's own Core i7-6900K  falls behind its sibling (which costs about 1/3 as much I might add). So basically, the AMD Ryzen CPU is roughly 32% faster than the FX-8370 in applications which are not capable of taking full advantage of the multi-threaded design. 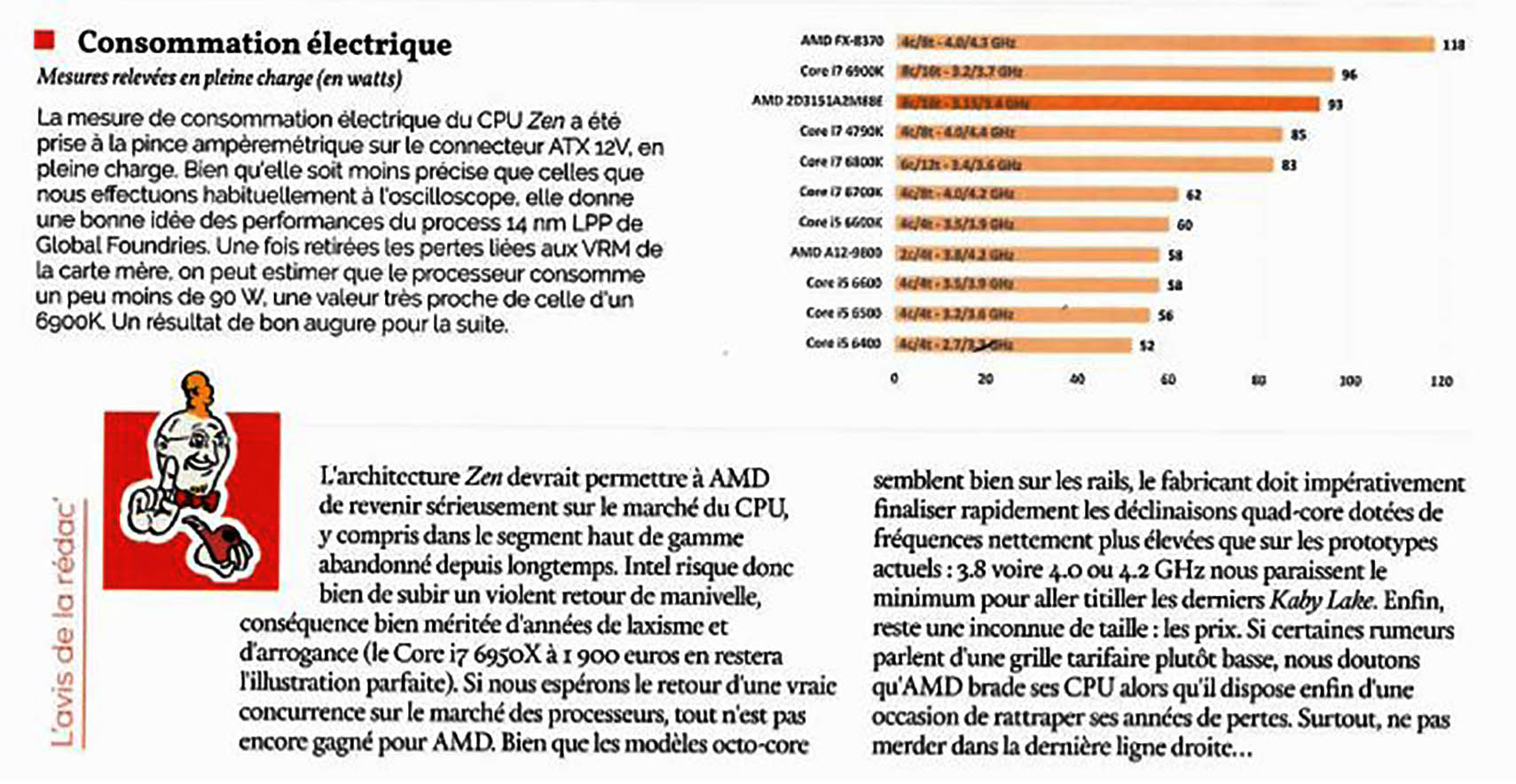 Th final portion of the review shows the power efficient design of AMD Ryzen as well as parting comments by the author.

As any tech enthusiast would know, the final question for any CPU or GPU is always the power draw. Here, the AMD Ryzen processor actually outperforms Intel's Core i7-6900K by drawing 93 Watts from the wall, where the latter draws 96 Watts. In comparison, the older FX-8370 draws around 118 Watts from the wall. Our readers might remember that AMD Zen processors are to be coupled with an AMD X370 board which we have seen quite a lot of lately. Here is the thing though, an 8-core processor has quite a lot of overclocking potential.

If there is any thermal headroom available on this chip over the factory clocks then even a clock speed increase of a few 100 MHz will result in significant gains on a cumulative basis (for applications that can fullly utilize the processor's multitude of threads). So the real question, will the AMD Ryzen processor beat out Intel's 6900K monster? Probably not. Keep in mind that according to these benchmarks it's around 13.6% faster than the AMD Ryzen (on a fully optimized load).

Lisa Su's statement says the final CPU will be clocked at 3.4 Ghz, and this sample is at 3.15 Ghz base clock. If that happens, we are looking at a clock increase of ~8%. Assuming a textbook linear increase (which usually does not happen), the 6900K will still be 5.6% faster than the Ryzen. The maximum clock speed we have heard about is around 3.5 GHz and even if that comes true, these benchmarks show that the 6900K is still comfortably ahead of the Ryzen (for optimized and unoptimized loads). That said, consider the fact that you are talking about a processor that is 2-3 times as expensive as the Ryzen but only a few percentage points faster.

If priced at the points we have heard about (given in the table below) then AMD will be able to give Intel an incredible amount of competition - something which has been absent for the past few years. It's official, folks, AMD is back.

As a bonus, here is the cover of the magazine that the review was published in: