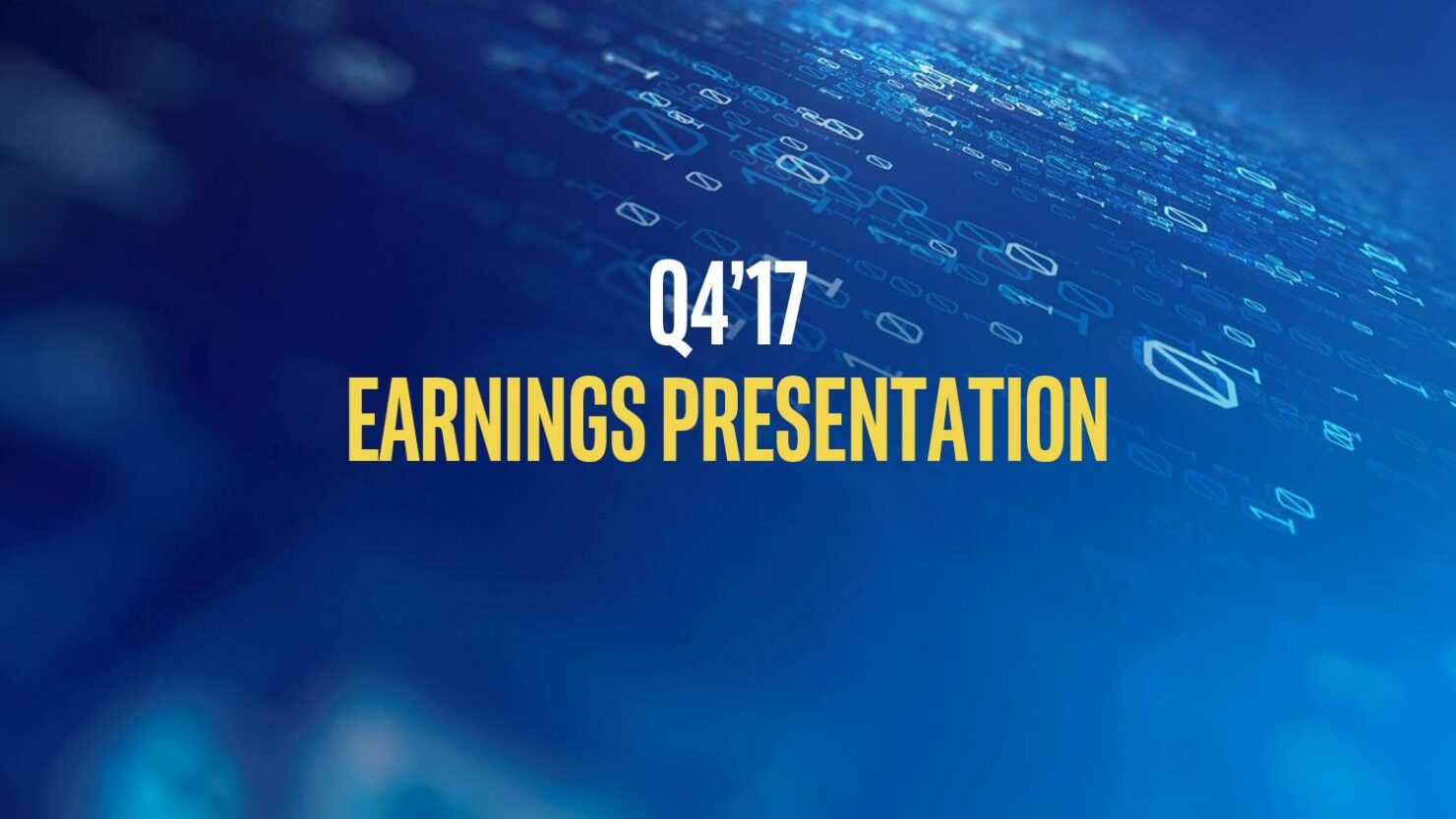 Intel (NASDAQ:INTC)'s earnings numbers came in yesterday and it has successfully beat on consensus and analysts estimates on both Revenue and EPS. The company declared a revenue of $17.1 Billion beating estimates by 761 Million as well as a non-GAAP EPS of $1.08, which is significantly higher than analysts estimates (by around 21 cents). GAAP diluted EPS with the full impact of the TCJA (Tax Cut and Jobs Act) was a loss per share of 15 cents.

"2017 was a record year for Intel with record fourth-quarter results driven by strong growth of our data-centric businesses," said Brian Krzanich, Intel CEO. “The strategic investments we've made in areas like memory, programmable solutions, communications and autonomous driving are starting to pay off and expand Intel's growth opportunity. In 2018, our highest priorities will be executing to our data-centric strategy and meeting the commitments we make to our shareholders and our customers."

The company is also advancing efforts to compete and win in artificial intelligence with the Intel® Nervana™ Neural Network Processor, customer momentum for its Intel® Movidius™ vision processing unit (VPU), and continued customer adoption of Intel® Xeon® Scalable processors. In autonomous driving, Mobileye had a strong finish to 2017 with a total of 30 ADAS customer designs wins as well as design wins for advanced L2+ and L3 autonomous systems with 11 automakers.

Analysis: Will Spectre and Meltdown haunt Intel in the years to come?

Spectre and Meltdown took the x86 industry by storm, unearthing an incredibly deep-rooted weakness in the micro-architecture that in some cases was so easy to exploit that a script kiddie with the proper code could have done it. The response of all chipmakers varied across the board but Intel was easily the one that was in the most trouble. Because while companies like AMD were vulnerable to Spectre variant 1, Intel was also vulnerable to Meltdown as well as Spectre variant 2 (it can be argued that AMD is vulnerable to this variant as well although this attack vector has never been demonstrated on an AMD system to date).

Here’s the thing though, these earnings numbers do not contain any impact from Spectre/Metldown. Nor did we expect them to. The impact will start to be felt from next quarter and even more the quarter after. In fact, this is something that could continue to affect Intel earnings for the next 1.5 years at the bare minimum. It takes roughly 3 years for a processor to go from the drawing board to the shelf. If Intel shifts into high gear and starts to correct future architectures, they could theoretically shave off 1.5 years from the 3 year total.

This of course means that any microarchitectures that have already been finished will be prone to the same bug as the current ones. In other words, Intel will have to continue to use work around for Spectre and Meltdown till the first completely fixed processor that will probably come by the start of 2019. And it is here that we realize that just how big a problem these bugs could create for the most advanced fabrication facility on the planet.

For the next 2 years, Intel (NASDAQ:INTC) processors and servers will use workarounds and patches for the Spectre and Meltdown bug. As far as we know, there is no known fix for Spectre variant 2 and Meltdown – you can only work around them. Which can introduce performance hits to certain environments (the vast majority aren’t impacted). In fact there have been reports floating around the web of systems restarting and becoming unstable after the patch had been applied.

Google wasn’t kidding when it codenamed the bug Spectre – because it’s going to haunt us for quite some time before it goes away. And for Intel, its woes include the Meltdown bug as well.

So now that we know that the bug will continue to impact Intel systems for at least 2 years, how would that impact earnings. This is where it gets slightly trickier. Intel has a very firm hold on the entire server and data ecosystem. We will undoubtedly see some small enterprises migrate to AMD based EPYC systems but I do not expect heavy weights like AWS and Google Cloud to shift the majority of their infrastructure to AMD – because regardless of what happens, no sys admin ever got fired for choosing Intel over AMD, and that likely won’t change in the future. The cost of migration to an AMD ecosystem might actually be larger than the cost of bearing some slight performance slowdown for a couple of years.

That said, we Intel will undoubtedly take a hit on earnings in the coming quarters (and that could be in significant digits if it loses any class action lawsuits that are pending against it) from small enterprises moving to AMD EPYC or loosing prospective clients to the same. Its worth noting that the scenario could change entirely if Spectre variant 2 was ever found in an AMD system, resetting the base parameters of the ‘game’ back to default and making AMD loose the relative advantage it enjoys right now.

Analysis: Impact of the Tax Cut and Jobs Act

The second thing we need to talk about in detail is the impact of the TCJA, which will shuffle the relative competitiveness of companies across the board. Intel, will be taking a $6.1 Billion charge due to deemed repatriation of foreign earnings over the course of 8 years partially offset by a $0.7 Billion tax benefit due to re-measurement of DTAs for a total TCJA charge of $5.4 Billion.

This is a pretty high charge as far as other industries are concerned, but perfectly median in the tech sector. We have seen effective tax rates in the range of 17%-25% but Intel reports that it expects its effective tax rate will drop to 14% from 2018 which should improve its earnings going forward. Intel is one of the top 5 R&D exporters in the US and the repatriated cash could help fuel M&A activity as well as spur job creation.

Its worth noting here that the provision for the TCJA supports “deemed repatriation” which essentially means that while Intel has to pay tax on its cash pile, after doing so, it doesn’t actually have to bring the money bank (something banks are happily exploiting to maintain their liquidity ratios abroad) since the govt will have deemed it to be repatriated already. This would mean that Intel might not bring the full cash pile home and its completely at its discretion how much of it, it decides to bring back. The company has stated that Fab 42 has undergone a hiring spree but its worth noting that this was something that is not the direct result of the TCJA and would have happened either way.

Intel is guiding a revenue of 14.5-15.5 Billion for Q1 2018 with a GAAP operating margin of 25% and a non-GAAP operating margin of 27%. The effective tax rate as stated earlier is going to be 14% with earnings per share guided at 70 cents (non GAAP) and 65 cents diluted. The company expects full year revenue to be 65 Billion with an overall earnings per share of $3.30.