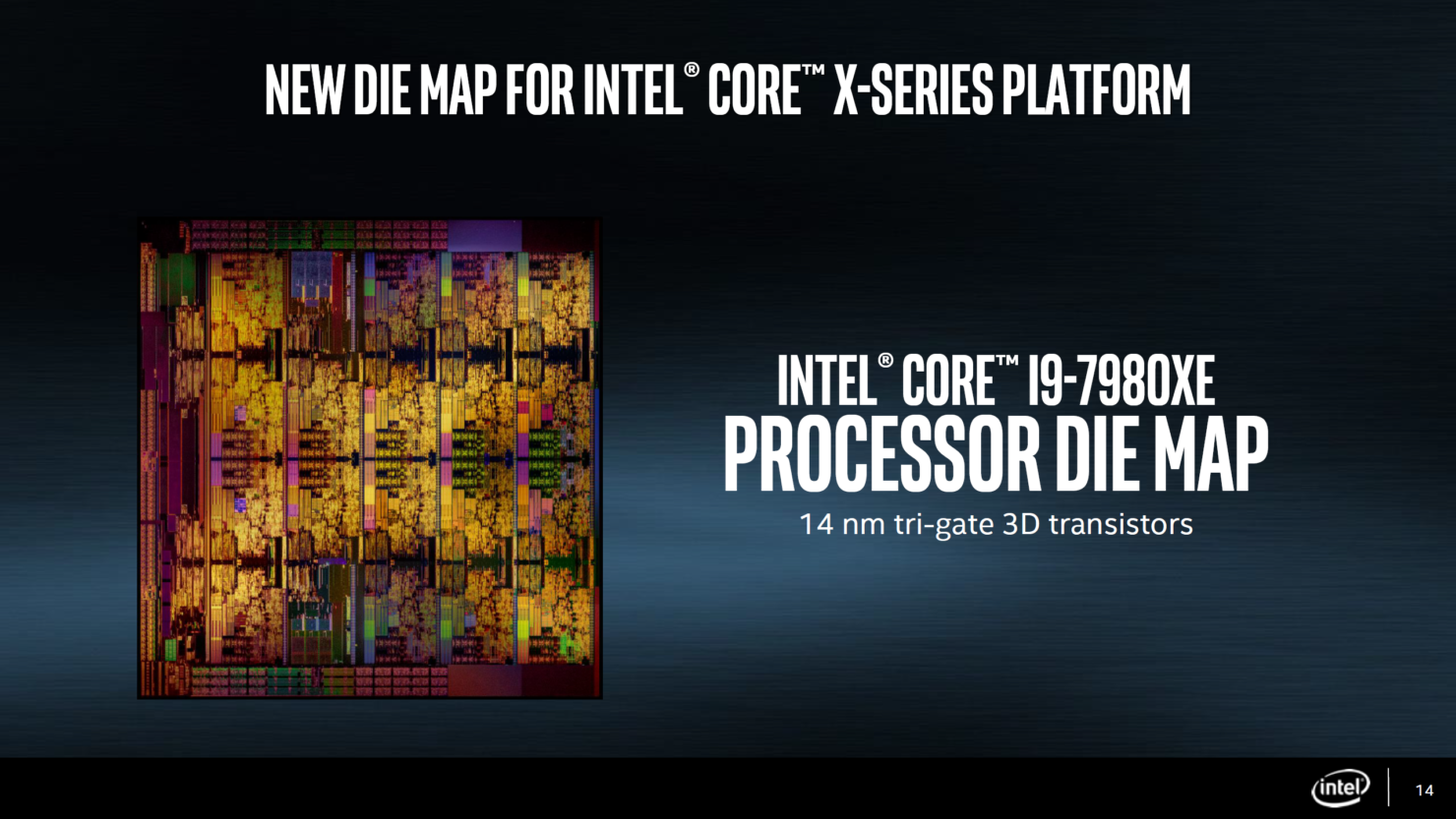 Intel's upcoming Core X processors with up to 18 cores are now listed and available for pre-order on OCUK. The list of processors include the flagship Core i9-7980XE Extreme Edition which will be featuring 18 cores and a price of $2000 US.

Intel had already previously announced the full specifications and launch dates for their Core X family. According to the details, the 12 core, Core i9-7920X will be available on 25th August while the 14, 16 and 18 core variants will be available on 28th August. For those who plan on getting a Core X chip right at launch, you could pre-order them now from OCUK. The processors were also listed over at SCAN.co.uk but the listings have been taken off and the links are now dead. We will still list the links in case they go live after a while.

Priced at $1999 MSRP (you are paying $111.11 per core) and featuring the Skylake-X architecture, the Intel Core i9-7980XE Extreme Edition is a beast of a processor will be the ideal go-to processor for content creators that want the maximum throughput in terms of rendering performance. This is a processor that will almost certainly be overkill for gaming (unless you are running some sort of CaaS enterprise).

Priced at $1699 and featuring the Skylake-X architecture, the Core i9-7960X has the exact same core count as AMD’s highest end Threadripper CPU, the Ryzen Threadripper 1950X and that’s not a coincidence. Intel has positioned this particular CPU to take on the Threadripper platform in all its glory (and core count) and features the Turbo Max 3.0 technology just like its bigger brother.

Priced at $1189 (you are paying $99.083 per core) ) and featuring the Skylake-X architecture, the Core i9-7920X is one of the more value oriented offerings for VR and content creators. The Intel Core i9-7920X will be Intel’s first 12 core, high-end desktop processor. It won’t be the flagship of the Core X family but it will still hold its own in terms of price and performance.

While it’s good to finally know the clock speeds, the frequencies themselves are much lower than what we would have called ideal for many workloads. As we have seen, the Ryzen Threadripper chips have higher clock speeds and similar core counts but Intel may be going for a different approach with the Extreme Core Count models. Instead of focusing on serial workloads, what Intel is going to aim and market these chips with is increased parallelism.

The reason is that Intel has already shown in their slides that these CPUs are designed for mega-tasking, a relatively new term in the industry that started with the Core i7-6950X. But mega-tasking is the future as people building such high-end systems with massive core counts aren’t just doing so for gaming. These PCs are better for content creation, development, heavy workloads and such tasks don’t require higher clock speeds as much as they take benefit of moderate yet stable clock speeds and Intel Core X can achieve a comparable clock speed to Threadripper in high core optimized workloads.

We have however seen some early performance results between Intel's 16 core and AMD's 16 core processors and most of those show Intel with a fairly good lead. The difference is that you are paying a premium of $700 US for Intel's processor compared to AMD's.

For now, Ryzen Threadripper seems like a very powerful and cost effective price while with Intel, you seem to be paying more, but are getting a slight advantage in terms of single core boosts, lower TDPs and a more refined architecture.