The first review of Intel's Core i9-7900X processor which is part of the Core-X family has just gone live over at Hexus and bit-tech. The review covers the full performance details on Intel's latest 10 core CPU that will be available for pre-order on 19th June followed by an official launch on 26th June.

Intel Core i9-7900X Review Showcases Excellent IPC, Stellar Multi-Tasking Performance and Lots of OC Headroom, All at the Slightly High Price of $999 US

The Core i9-7900X replaces the Core i7-6950X with the same number of cores and threads, but at much higher clock speeds and almost $700 US lower price point. The chip features Intel technologies like Turbo Boost 3.0 and Mesh Architecture which will deliver increased efficiency on the architectural level.

In benchmarks that are specifically built to test CPU performance, the Intel Core i9-7900X delivered some exceptional results. It came out much faster than both the Ryzen 7 1800X and even the Core i7-6950X which has the same number of cores. In Cinebench, the chip destroyed the Core i7-6950X in multi-threaded loads while the Ryzen 7 1800X was two places behind the Intel chip. In PiFast, the chip came out second as the 7700K topped out the results. This is due to much higher clock speeds which the 7700K can sustain compared to the Core i9-7900X.

In memory tests, the chip also provided better Memory Bandwidth Read scores while the Write and Latency scores were a bit off. The write bandwidth may be affected due to rearrangement of the cache structure on Intel processors. Note, they are designed to be more efficient.

In 3DMark Synthetic results, the CPU was bound by the GPU and hence all chips in the HEDT field scored similar to each other. In VRMark, there's a bigger difference but that is said to be lack of a mature motherboard BIOS since a BIOS change resulted in a uplift of score from 4015 to 10191. A retail BIOS will yield even better results once the platform is launched.

When it comes to gaming, Deus Ex performed well across all chips since it's more GPU bound while Hitman, a game that is particularly optimized for multi-core processors and uses DX12 technologies to leverage performance, showed better results on the Core i9-7900X. It's the only chip that is able to achieve over 100 FPS in QHD while other chips are below 97 FPS.

The third title once again was affected by a BIOS bug which resulted in a major FPS issue. Here, the chip scored 74.9 FPS while the 6950X scores 87.8 FPS. But as suggested before, the BIOS was the main culprit and the latest one helped push FPS from 48.2 to 74.9. Expect better gains with retail BIOS at launch.

When it comes to overclocking, the Core i9-7900X has tons of headroom. It was overclocked to 4.7 GHz across all cores with just 1.25V and cooled by a Noctua NH-D15S to keep under optimal loads. The chip doesn't like any more voltage than that though as 1.3V means the temperatures start to hover around 100C which is not optimal. Regardless, the result of the overclocking was much higher multi-tasking performance in the trio of benchmarks tested below (Image Credits: Hexus):

In terms of stock power consumption, the chip is rated at 140W and as such its idle and video encoding power draw are higher than the rest of the chips. 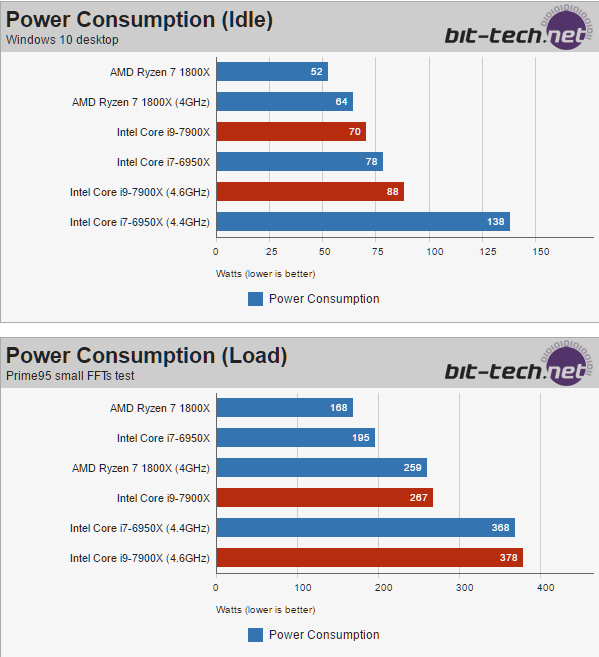 Faster clocks mean that it requires more power to draw from the board. In gaming though, the chip has much more optimized power ratings at 256W while the 6950X consumes 261W and the Ryzen 7 1800X consumes 262W.

Finally, we have the bang for buck and bang for watt charts from Hexus which show the bigger picture. The entire Core i9 processor lineup is premium market aimed and that's why they are higher priced than the regular chips. This means that these aren't the best bang for buck but if users want performance, they got to pay big sums of money. In terms of performance per watt, the Core i9-7900X is a massive improvement over the Core i7-6950X which says a lot. It will be interesting to see the other Core i9 chips being compared here too.

Here's what Hexus had to say about the chip itself in the ending notes:

The world's first Core i9 processor, the 7900X, is ultimately a 10-core powerhouse offering excellent IPC performance and outstanding multi-core prowess in a single $999 chip armed with plenty of overclocking headroom. Said ingredients make it an automatic choice for power users seeking the ultimate PC experience, and the chip's benchmarking potential makes for a fitting debut of the Core i9 brand.

Bottom line: the price tag remains a stumbling block and software optimisations are needed, but anyone willing to splash a thousand bucks on a new CPU need look no further than the Intel Core i9-7900X. Over to you, Threadripper. via Hexus

From the review, we can tell that Intel Core-X processors are built for the high-end enthusiasts. The chips are yet to ship in retail so some bugs remain to be sorted out over in the motherboard BIOS department. We may be looking at even better performance in the final presentation as we did with AMD's Ryzen processors weeks after launch. Intel Core-X series processors officially launch on 26th of August along with the X299 platform. You can read our full coverage of these processors over here.