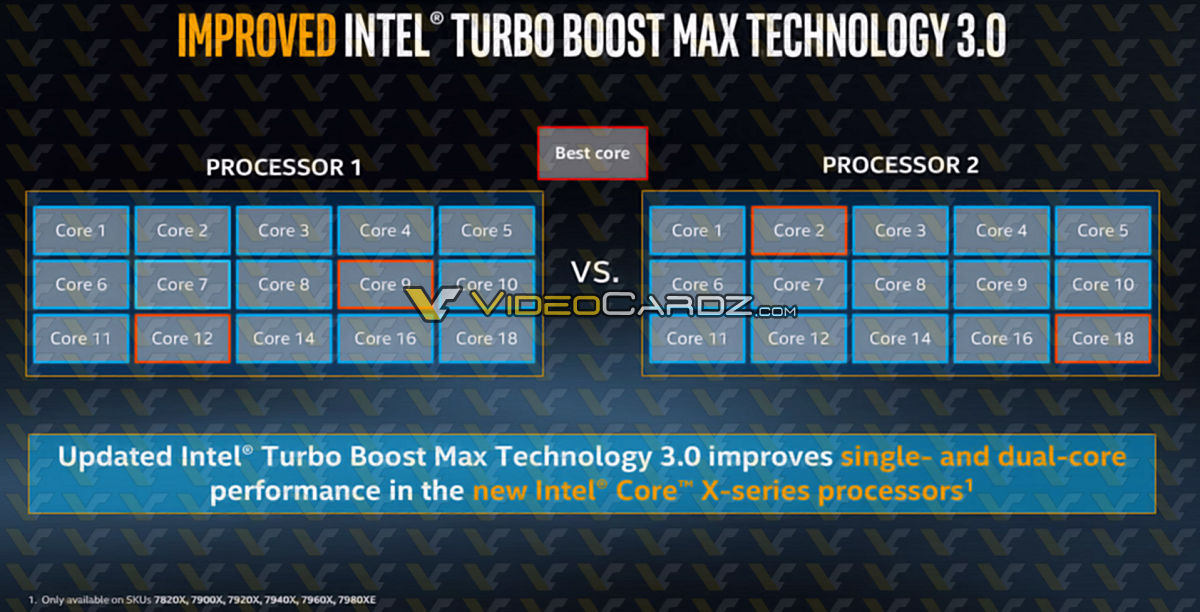 The Intel Core X series family was detailed yesterday but know we know about their secret sauce that will give them an edge over AMD's Ryzen Threadripper processors. Featuring up to 18 cores, the Intel Core X processors will be the fastest HEDT processors featuring Intel's 14nm process and some of the fastest clock speed on high core chips.

By know, you must be well acquainted with the Intel Core X series of processors that features up to 18 cores. It's an entire range of processors housing the Skylake X and Kaby Lake X family of CPUs in the LGA 2066 socket. The SKUs range from 4, 6, 8, 10, 12, 14, 16 core options and there's a wide list of options to select from as compared to AMD Ryzen platform.

The Ryzen HEDT platform separates itself in mainstream and high-end categories. Unlike Intel, AMD buyers will be only able to purchase a chip with more than 8 cores for their X399 platform while Intel users can gain benefits of the high end X299 platform by paying for a lower core and lower cost chip. This will allow a decent upgrade path for them in the future when they wish to purchase a higher core count chip for the platform. 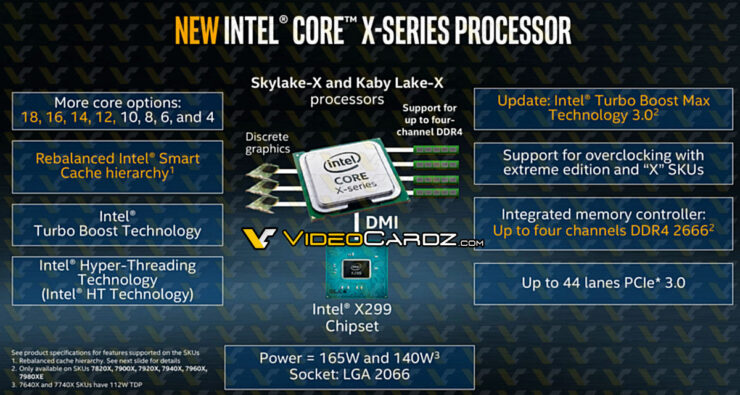 Regardless, the Intel CPUs will boast a refined 14nm process node that delivers the fastest clock speeds we have seen on an HEDT platform. That's also where Intel has their latest secret sauce technology coming from and boy oh boy, it's gonna shake up the gaming performance in Intel's benefit by a lot.

The technology in question is Intel's Turbo Boost Max 3.0 and our friends over at Videocardz shared it in an exclusive report. So what does the tech do? Well, Intel Turbo Boost 2.0 which worked with a few factors involved already delivers impressive clock boosts in workloads. It's configured for heavy, light and single core optimized tasks and takes into account a few factors including, but not limited to, the following:

Intel's Turbo Boost Max 3.0 further refines this technology and delivers even higher boosting frequencies. We are talking about greater than 4.0 GHz and even up to 4.5 GHz on the Intel i7-7980XE 18 core behemoth. What the Turbo Boost Max 3.0 tech does is select from a single or 2 best cores from the chip and boost them to insane clock speeds for faster single and dual core performance.

How that will effect workloads? Well, if you don't know, most of the AAA games we play these days aren't multi-core optimized and run better on faster clocked chips instead of those with higher core counts. That's one reason the Intel Kaby Lake lineup which features just 4 cores and 8 threads is on par or better than AMD's Ryzen 7 1800X 8 core, 16 threaded chip in gaming. 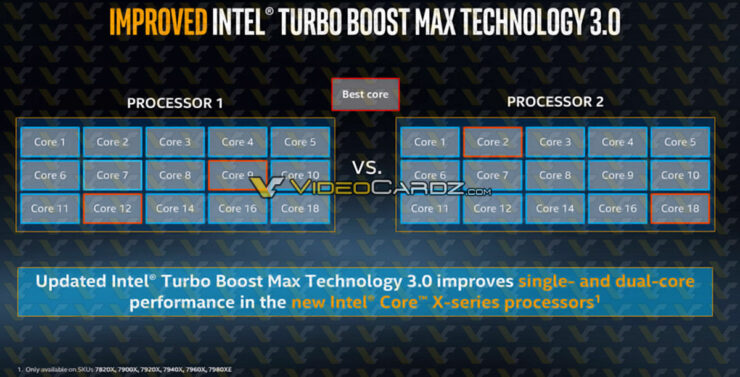 The former runs at up to 4.5 GHz clock speeds while the Ryzen 7 only manages 4.0 GHz while featuring twice the number of cores and threads. Similarly, AMD's Ryzen threadripper flagship, the 1998X is expected to clock at 3.9 GHz max with a 100 MHz further added thanks to XFR (Extended Frequency Range). This means that Intel's solution with Turbo Boost Max 3.0 of 4.5 GHz will not only run faster, but deliver similar or higher number of cores. This gives Intel a major edge not only in single / dual core/thread optimized games but also in those which do support multiple cores and threads. It's worth nothing that only Intel Core X chips with more than 6 cores support this tech and details of them are listed below:

We have a new flagship and it's a monster in raw specifications. The Intel Core i9-7980XE is Intel's fastest and also the worlds fastest chip, featuring 18 cores, 36 threads and lots of cache in the new rebalanced Intel smart cache hierarchy system. We are looking at 24.75 MB of just L3 and 18 MB of L2 cache which totals 42.75 MB, that's impressive.

The TDP we are looking at is also higher at 165W but in return, we will be looking at some really high clock speeds thanks to Turbo Boost Max 3.0 technology. There's full overclocking support, massive 44 PCIe Gen 3.0 lanes and full support for overclocking. This monster is the highest core chip we will be getting this year for any HEDT platform and that will definitely come at a really high price point.

The Intel Core i9-7960X is the direct answer to AMD's 16 core Ryzen threadripper chip. It comes with 16 cores, 32 threads and features 22 MB of L3 cache. This chip will be featuring a TDP of 165W and will be priced over the $1000 range but it will be interesting to see how this chip competes against AMD's highest core count chip, the rumored Ryzen Threadripper 1998X.

Intel will have to compete in terms of both price and performance but looks like their chips will definitely have an edge with new clock boosting technologies on Skylake X.

The Intel Core i9-7940X is a 14 core, 28 thread chip which just blows away anything that we have seen so far. It features even more cores than the Core i9-7920X which we previously thought to be the flagship chip. Intel is definitely going to bring a very heated battle against Ryzen Threadripper CPUs. The chip will feature 19.25 MB of L3 and 14 MB of L2 cache which accumulates to 33.25 MB cache.

The Intel Core i9-7920X is no longer the flagship of the Skylake X range, but it's still a fast chip. This chip is a juggernaut featuring a total of 12 cores and 24 threads. The total cache on this behemoth is 16.5 MB (L3). Skylake X CPUs will feature a LLC (Last Level Cache) of 1.375 MB (L3) per core and MLC (Mid Level Cache) of 1 MB (L2) per core. So the total cache each core will be able to access is 2.375 MB. So theoretically, we are looking at 28.5 MB of total cache available on the chip which is part of Intel's rebalanced cache hierarchy that not only is going to save space, but also deliver faster performance to improve IPC.

The chip will be a replacement for the Core i7-6900K which has been a very popular chip on Intel's current X99 enthusiast platform. The chip will also launch in June and will directly tackle the Ryzen 7 1800X. Although, price wise, it could sell for higher versus 1800X's $499 US market price.