New information regarding the Intel Comet Lake-S line of desktop processors has leaked out over at XFastest. Compared to yesterday's leak which was dodgy at best, the data posted by the source looks to be more reliable and reveals a few new details about the 400-series platform itself which will be supporting Intel's 10th Generation processors.

The details are mostly about the platform itself but there are also two desktop roadmaps shown. The first desktop product roadmap shows that the next major updates to expect from Intel will be the Cascade Lake-X processors with up to 18 cores (165W TDP) on the LGA 2066 socket (X299). Intel's Glacier Falls platform will replace the Basin Falls (Refresh) which was denoted by the X299 codename but we have already confirmed that the new motherboards will retain X299 naming as the chipset differences are not that huge and the platform is pretty much the same. A few board makers did anticipate a chipset change since we saw LGA 2066 socketed boards with X499 marking over them but those were just placeholders as Intel later revealed that they would be sticking with X299 for marketing. 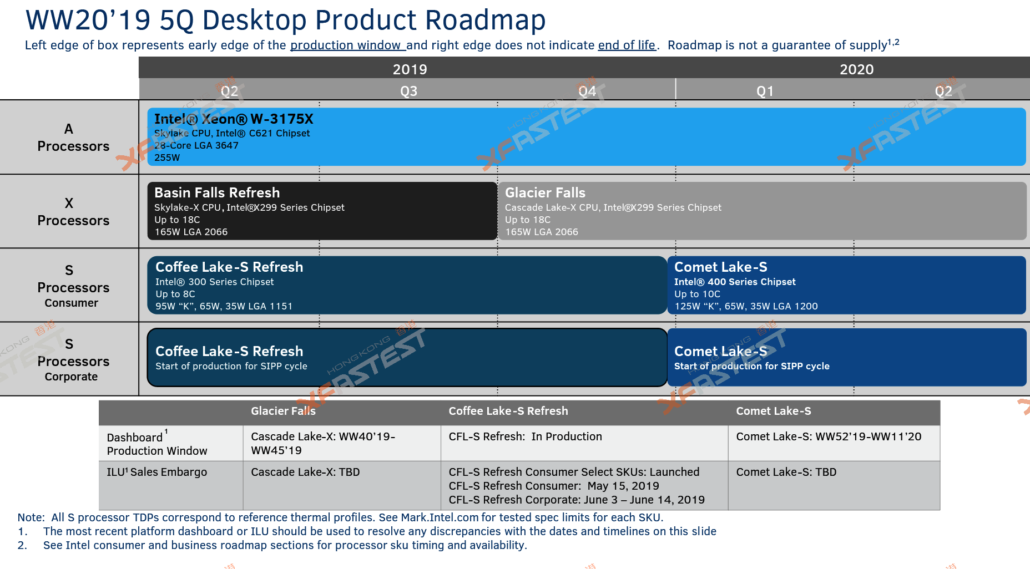 Intel doesn't seem to be planning anything new for their premium A-series processors for the LGA 3647 socket and that would continue to utilize the Xeon W-3175X. On the mainstream side, Comet Lake-S based on the 14nm++ process node would be here to serve consumers with up to 10 cores, a hefty TDP bump of 125W and a launch that is planned around new years (2020). The Comet Lake-S lineup would replace the entire Coffee Lake-Refresh stack of 9th Generation processors by 2020 so it won't be just an enthusiast tier launch. 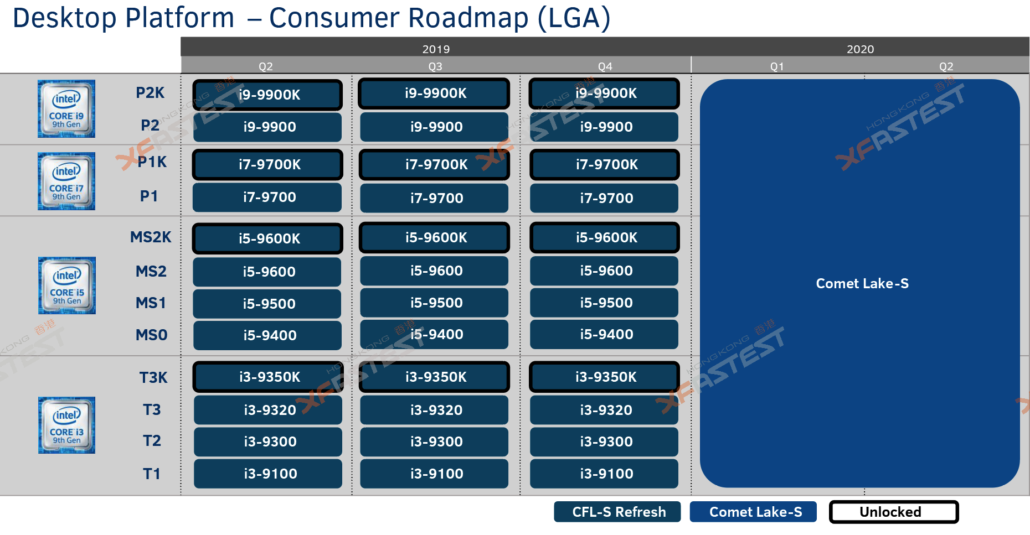 Talking about the platform, there will be new 400-series motherboards so we can expect something like the Z470 or Z490 for the 10th Gen lineup. The socket will be different and mentioned to be LGA 1200. These are 49 more pins than the existing LGA 1151 socket so we can say goodbye to compatibility on current boards. The platform will support 125W enthusiast, 65W mainstream and 35W low power processors. Since the process and architecture are pretty much the same as last year, Intel seems to be pushing the TDP number up from 95W on 8 core chips to 125W on 10 core chips for optimal performance and clock stability. AMD, on the other hand, will be offering 16 cores at 105W but Intel is known to have a higher out-of-box clock.

Some key features of the 10th Generation line are listed below:

One big change to the platform will be the number of available PCIe lanes. Intel isn't pushing the move to PCIe Gen 4 yet like AMD, but they are planning to offer more PCIe lanes compared to AMD's Ryzen 3000 / X570 platform. The platform details mention up to 46 I/O lanes, 30 of which will be provided by the chipset. That means that the CPUs will still feature 16 PCIe lanes, but the PCH will boast a higher number.

There will be 24 PCIe 3.0 lanes while the rest will be powering different I/O channels. There is also support for Intel's Optane memory on the LGA 1200 platform, so that is something to look forward too. The platform block diagram is also provided which seems to suggest that DDR4-2666 (native) compatibility will be retained.