Intel recently did a demo of its upcoming 3D XPoint platform, specifically Optane based SSDs. While the company has previously revealed numbers regarding the new technology, this is the first time that a live demo using a practical every-day application has been performed. It is worth noting here that as we move towards storage technology that is blazing fast, the interface acting as the middleman is quickly becoming a bottleneck. 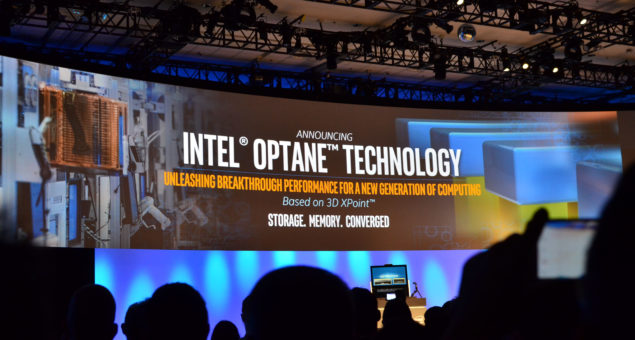 Intel reveals real life benchmarks of its Optane based SSDs

The event in question was Intel's "Nonvolatile Storage Solutions (Non-Volatile Memory Solution Group) " presented by Vice President of Intel China, Yang Xu (Ian Yang). In the live demo, Intel demonstrated that an SSD to SSD transfer peaked out at approximately 1.73 GB/s - which is already pretty damn fast. An Optane to Optane based storage transfer peaked out at roughly 2.09 GB/s, not because of lack of speed on the SSD's part but rather due to the bottleneck constraints of the interface being used for the transfer. As the test progressed however, the transfer rate of the NAND based SSD fell down to 284 MB/s while as the Optane based SSD more or less maintained its strong momentum. Images of the benchmarks are given below:

Optane based memory devices aren't just for storage, they will be available in the DIMM format as well. In fact, they will be available for everything from Datacentres to Ultrabooks and while the mainstream niche will most probably be interested in them as a storage memory standard, their versatility enables them to be used in the DIMM format as well for Xeons. The Optane SSD that was demoed was a PCIe based device that was pit against an Intel P3700 SSD (which is the best offering in conventional SSD storage Intel has right now). 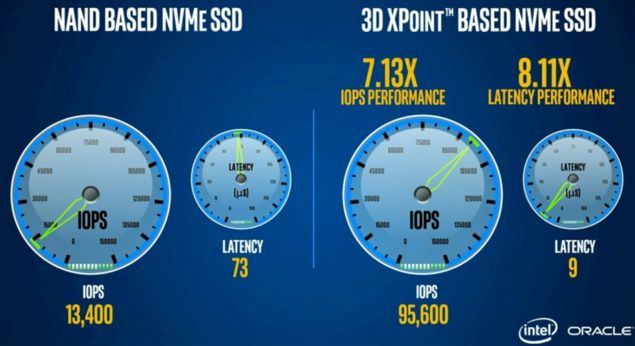 Intel has previously talked about its 3D XPoint memory and Optane based SSDs – both of which aim to be part of its framework in the future. The 3D XPoint memory technology has 1000x the endurance of NAND flash and is 10 times denser and in some cases upto 1000x faster as well. The 3D XPoint memory will be available in market during next year and will revolutionize the tech industry with the latest 3D XPoint based Optane SSDs and DIMMs.

Intel Optane Memory Specifications and Roadmap Update – Intel 8000p Revealed, Will Have Sequential Read of up to 1600 MB/s