Intel's 10th Generation Comet Lake-S Desktop Core CPUs have yet to launch but leaks of the 11th Gen Rocket Lake-S Core CPUs have already started appearing. The first Rocket Lake-S Engineering Sample, which is an 8 core CPU, has been spotted by hardware leaker Rogame and there are some really interesting things we have to talk about.

So coming to the meaty part of the leak, the Rocket Lake-S ES CPU was spotted within the 3DMark database which has become commonplace for finding entries of several unreleased CPUs and GPUs. The CPU, as expected, comes with the Intel(R) CPU 0000 codename which is due to the fact that it is still an early sample with a release planned several quarters ahead. The CPU, however, has been tested on an Intel Corporation RocketLake S UDIMM 4L ERB motherboard which could be a test platform to validate and evaluate early samples of the chips. 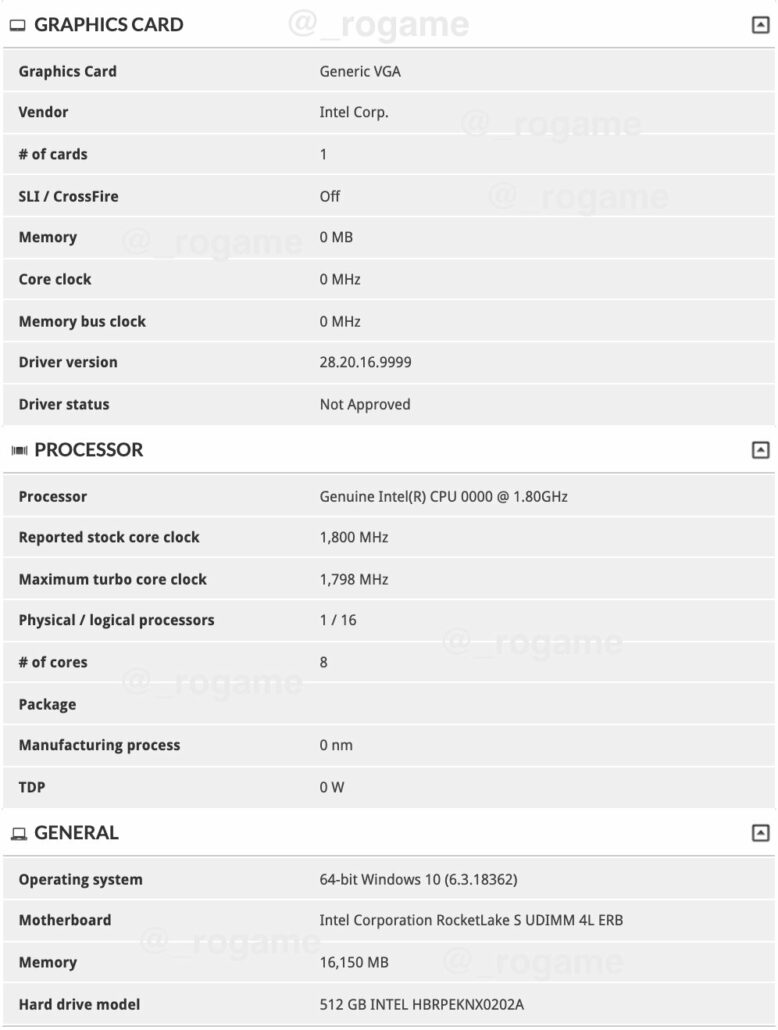 The CPU itself is an 8 core and 16 thread part. We have seen reports that Intel's Rocket Lake-S CPU family would max out at 8 cores and 16 threads so Intel is already testing the highest-end config for its mainstream desktop platform. The core clocks are reported at 1.8 GHz base and boost. It's very normal to see early samples being clocked this low. We have also seen Comet Lake-S clocks being vastly lower in ES state compared to the 5 GHz+ frequencies that the final & retail ready chips will boast.

First of all, the Rocket Lake-S desktop platform is expected to feature support on LGA 1200 socket which will make its debut with Comet Lake-S CPUs although on 400-series motherboards. The Intel Rocket Lake-S processors will be launching alongside the 500-series motherboards so it marks one major question as to whether the CPUs will be kept backward-compatible with 400-series chipset based LGA 1200 socket or will they only come land in exclusive support on 500-series boards. In the case of the latter, the Comet Lake-S and 400-series platform would be very short-lived since the Rocket Lake lineup is expected later this year and Comet Lake-S CPUs will be available around May-June 2020. This would be a much faster replacement than what we saw when going from Kaby Lake to Coffee Lake back in 2017.

The Coffee Lake lineup, although being supported by the same LGA 1151 socket, was supported exclusively by the Z370 motherboards. Intel suggested that due to a new pin layout on the Coffee Lake processors, the updated motherboards were required although many enthusiasts bypassed this restriction and booted their Coffee Lake CPUs on Z270 motherboards. We may see a similar thing happening with Rocket Lake and LGA 1200 considering the updated microarchitecture and design of the new chips. A recent leak also hinted at SKUs ranging from 35W and all the way up to 125W.

Once again, the reason I think that Rocket Lake is using Willow Cove cores is because Tiger Lake with the same architecture features Xe Gen 12 graphics while Ice Lake with Sunny Cove cores is using the Gen 11 GPU. It is possible that the cache is different on desktop chips but once again, that remains to be confirmed and until we see more leaks, this is up for debate.

That's obviously a lot of information that we know for Intel's Rocket Lake desktop family but it will be nice to see how they perform in early benchmarks against the existing 14nm Skylake derivatives which have been available for several years now. The Rocket Lake-S family would directly compete against AMD's Ryzen 4000 'Vermeer' CPUs which will be featuring the new Zen 3 architecture with major architectural changes so expect a lot of heated CPU wars later this year.