We already saw a major leak of Intel's next-generation Rocket Lake-S desktop platform last week from Videocardz. The leak gave us a look at what to expect from Intel's next desktop platform, the one that should succeed Intel's Comet Lake-S family which is just another 14nm Skylake rehash as mentioned by us in an earlier post. So with that said, let's get on with the details starting off with the 11th Generation Tiger Lake family. 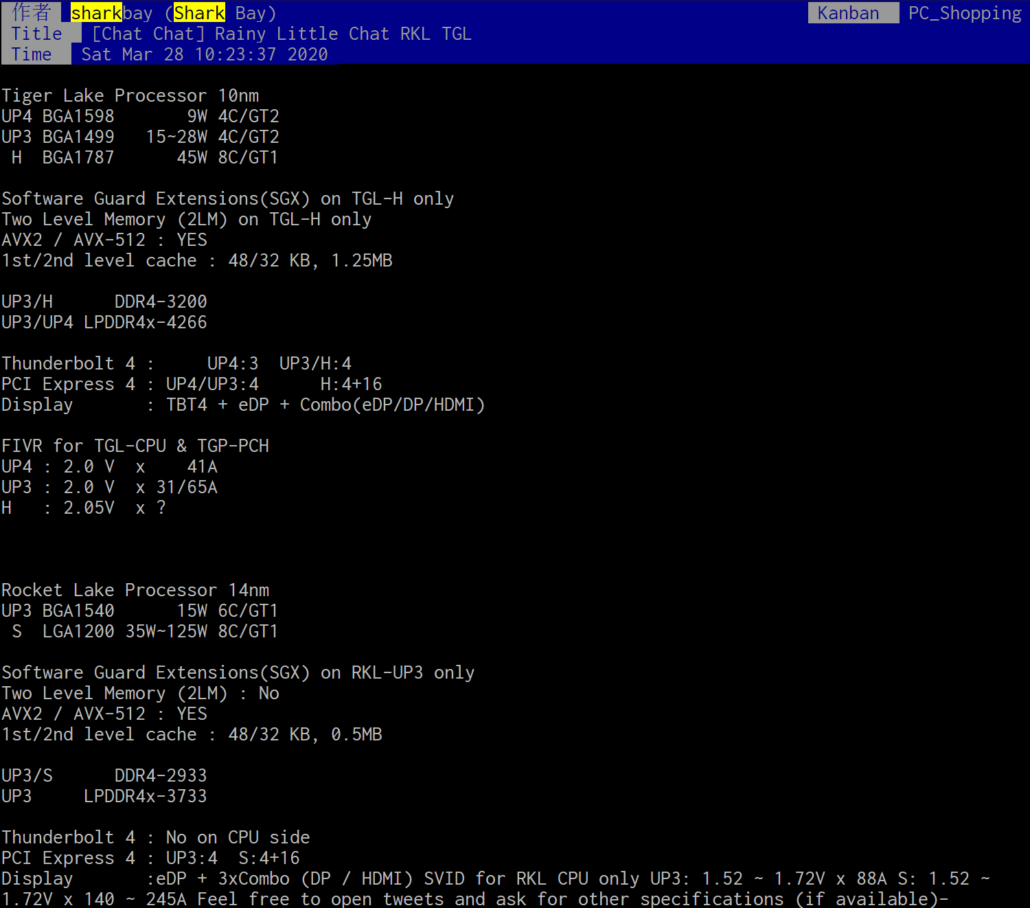 That and coupled with the Xe GPU architecture, the 10nm+ node should also deliver increased clocks compared to the first iteration of the 10nm+ architecture featured on Ice Lake chips. The 10nm Tiger Lake CPUs would tackle AMD's 7nm Zen 2 based Ryzen 4000 'Renoir' family in the second half of 2020.

We have recently started hearing a lot about Intel's Rocket Lake CPUs and they are turning out to be a Frankenstein of sorts based on the specifications that we have learned so far. We first heard about Intel's Rocket Lake CPUs back in 2019 in a roadmap that suggested that it would be another 14nm lineup but featured the new Gen 12 Xe graphics. Later, Shark bay posted a couple of details regarding the lineup, further suggesting that it would feature up to 8 cores, 125W TDP and DDR4 memory at 3733 MHz speeds.

At the same time, there was chatter in the tech community that Rocket Lake may possibly end up being a 14nm backport of a new core architecture since it aimed to target the mass majority of the market and 10nm, even years later, couldn't handle the job. A process roadmap from Intel laid out their plans up till 2029 and confirmed that backport opportunities do exist for next-gen chips. Now, we have more details on the Rocket Lake platform.

Coming to the platform details leaked by Videocardz, there's a bunch of information to go through. First of all, the Rocket Lake-S desktop platform is expected to feature support on LGA 1200 socket which will make its debut with Comet Lake-S CPUs although on 400-series motherboards. The Intel Rocket Lake-S processors will be launching alongside the 500-series motherboards so it marks one major question as to whether the CPUs will be kept backward-compatible with 400-series chipset based LGA 1200 socket or will they only come land in exclusive support on 500-series boards. In the case of the latter, the Comet Lake-S and 400-series platform would be very short-lived since the Rocket Lake lineup is expected later this year and Comet Lake-S CPUs will be available around May-June 2020. This would be a much faster replacement than what we saw when going from Kaby Lake to Coffee Lake back in 2017.

Once again, the reason I think that Rocket Lake is using Willow Cove cores is because Tiger Lake with the same architecture features Xe Gen 12 graphics while Ice Lake with Sunny Cove cores is using the Gen 11 GPU. It is possible that the cache is different on desktop chips but once again, that remains to be confirmed and until we see more leaks, this is up for debate.

That's obviously a lot of information that we know for Intel's Rocket Lake desktop family but it will be nice to see how they perform in early benchmarks against the existing 14nm Skylake derivatives which have been available for several years now. The Rocket Lake-S family would directly compete against AMD's Ryzen 4000 'Vermeer' CPUs which will be featuring the new Zen 3 architecture with major architectural changes so expect a lot of heated CPU wars later this year.